On February 11, members of Turkish-backed militant groups shot down a Syrian military helictoper with a MANPAD in eastern Idlib. The incident happened near the village of Nayrab (west of Saraqib) amid an intense fighting between the Syrian Army and forces led by Hayat Tahrir al-Sham (formerly the Syrianbranch of al-Qaeda) in the area.

Following the incident, multiple pro-Turkish sources have speculated that the helicopter was downed by the Turkish Air Force’s F-16 jet. These reports are fake news. Nonetheless, the MANPAD used was likely supplied by Turkey.

It looks like the trail of a CIA supplied older Stinger that the MIT puppets are handing out to the headchopper losers. It is time the Turkeys lose some helos or crappy F-16.

TR would not hand any manpads to Idlib. If she did , these choppers would be downed long ago.

I would hope not, because manpads in Wahhabi terrorist hands will pose a real threat to the civilian air traffic in the most dense flight path from Persian Gulf to the Aegean. No plane would be safe and these murdering morons will get a lucky shot.

Remember the time the terrorists in ghouta were targetting civilians flights from damascus airport using manpads? They actually did hit a plane with iranian commandos near there killing almost 100.

klove and light
Reply to  Sencer

Easy with the robust language my friend. This guy is not a radical and sounds quite decent. However, that ErDOGan is a son of real whore.

I somewhat agree with you sir, but in the back.of.my.mind” you can put make up on a pig, its still a pig”.

I have been out with a lot of Americunt pig faced skanks with lipsticks on their fat lips in my younger days, so I know exactly what you mean ;)

Sencer
Reply to  klove and light

That ”child frocking” obsession of yours is highly interesting though.. Do you have any kind of relation with that leader of Tiger forces , suhely Hassan ?

Looking at Turkish Vehicles around (from other sources ) including a Kirpi ambulance , there is a strong chance that the manpad was fired by a TAF personel.

The headchoppers and Turkey military are the same. They are using the 1980’s Paki terrorism handbook of plausible deniability.

No they are not dear.

Hope you are right lad. You sound like a sensible young man.

Erdogan is a vicious man , but not a fool. I dont think he will hand some manpads to militans in Idlib which means giving an open ticket to Putin for arming PKK with Iglas.

Putin will never give manpads to Kurd turds, the Russians had really bad experience with the CIA Stingers in Afghanistan. The Kurds are treacherous bastards and will sell them to the highest bidder. Even the Shah who started arming mullah Barzani in the 70’s made sure they only got small arms and upto 81 mm mortars and RPG bought from eastern Europe.

The kurds have a fully functioning US made AD system. They are hiding that amongst other heavy weapons in caves in pieces. Think the US screwed up with that one.

klove and light
Reply to  Sencer

ofcourse they are.. you degenerate turkish child fuckinf sheep fucking son of a turkish whore

Sencer
Reply to  klove and light

No they are not, dear. Anyhow I have to confess that was an impressive comment from a gentleman named himself ‘love and light’

Are you an irony yourself or simply end result of heavily retarded parents who also happen to be a brother and sister ? Just curious.

Really :) how is the kebab shop “Jihad” going laddie?

All the chanting in the video hyped me up!

Take it from a non-religious person and an elder, chanting in vain “God is great” when killing another human being is quite obscene and not very religious. Even in your religion, the prophet said taking one life is like killing humanity. You guys should have respect for all human life and should not act like the Americunt and Jew dehumanized savages. What is the point of Muslims killing Muslims, when the Jews are stealing your lands and Americunts killing millions and stealing OIL?

This inter.muslim killing benefits the zionists primarily.
You know the.score youve been around.

Even in your religion, the prophet said taking one life is like killing humanity.

The prophet you are talking about, this heinous pedophile, refers only to muslims, not to other people. So, don’t be surprised.

Well casting childish aspersions on historical figures is quite stupid. In that case Mary was a whore, Jesus a faggot, and Abraham a child throat slitter, so what’s your point Jew rat? That is why fact based secularism is the best and makes a mockery of the Abrahamic desert cults, which are violent by nature. The Jew scum are the worst of the lot. Believe me.

Jew rat! Cool! That’s new. XD
I will show that to my Nazi friends.

That is why fact based secularism is the best.

Here I agree with you. All religions are shit. If religions are the reason for conflicts, disputes and hate, you can imagine, where they come from.

Of you’re bothered to read this than that’s good, 3 verses and some notes…

*note*
This means that the survival of human life depends on everyone respecting other human beings and in contributing actively to the survival and protection of others. Whosoever kills unrighteously is thus not merely guilty of doing wrong to one single person, but proves by his act that his heart is devoid of respect for human life and of sympathy for the human species as such. Such a person, therefore, is an enemy of all mankind. This is so because he happens to be possessed of a quality which, were it to become common to all men, would lead to the destruction of the entire human race. The person who helps to preserve the life of even one person, on the other hand, is the protector of the whole of humanity, for he possesses a quality which is indispensable to the survival of mankind.

إِنَّمَا جَزٰٓؤُا الَّذِينَ يُحَارِبُونَ اللَّهَ وَرَسُولَهُۥ وَيَسْعَوْنَ فِى الْأَرْضِ فَسَادًا أَنْ يُقَتَّلُوٓا أَوْ يُصَلَّبُوٓا أَوْ تُقَطَّعَ أَيْدِيهِمْ وَأَرْجُلُهُمْ مِّنْ خِلٰفٍ أَوْ يُنْفَوْا مِنَ الْأَرْضِ  ۚ ذٰلِكَ لَهُمْ خِزْىٌ فِى الدُّنْيَا  ۖ وَلَهُمْ فِى الْأَاخِرَةِ عَذَابٌ عَظِيمٌ
“Indeed, the penalty for those who wage war against Allah and His Messenger and strive upon earth [to cause] corruption is none but that they be killed or crucified or that their hands and feet be cut off from opposite sides or that they be exiled from the land. That is for them a disgrace in this world; and for them in the Hereafter is a great punishment,”
(Al-Maaida 5: Verse 33)

*note*
The ‘land’ signifies either the country or territory wherein the responsibility of establishing law and order has been undertaken by an Islamic state. The expression ‘to wage war against Allah and His Messenger’ denotes war against the righteous order established by the Islamic state. It is God’s purpose, and it is for this very purpose that God sent His Messengers, that a righteous order of life be established on earth; an order that would provide peace and security to everything found on earth; an order under whose benign shadow humanity would be able to attain its perfection; an order under which the resources of the earth would be exploited in a manner conducive to man’s progress and prosperity rather than to his ruin and destruction. If anyone tried to disrupt such an order, whether on a limited scale by committing murder and destruction and robbery and brigandry or on a large scale by attempting to overthrow that order and establish some unrighteous order instead, he would in fact be guilty of waging war against God and His Messenger. All this is not unlike the situation where someone tries to overthrow the established government in a country. Such a person will be convicted of ‘waging war against the state’ even though his actual action may have been directed against an ordinary policeman in some remote part of the country, and irrespective of how remote the sovereign himself is from him.

These penalties are mentioned here in brief merely to serve as guidelines to either judges or rulers so they may punish each criminal in accordance with the nature of his crime. The real purpose is to indicate that for any of those who live in the Islamic realm to attempt to overthrow the Islamic order is the worst kind of crime, for which any of the highly severe punishments may be imposed.

*note*
If they give up subversion and abandon their endeavour to disrupt or overthrow the righteous order, and their subsequent conduct shows that they have indeed become peace-loving, law-abiding citizens of good character, they need not be subjected to the punishments mentioned here even if any of their former crimes against the state should come to light. If their crime involves violation of the rights of other men they may not be absolved from their guilt. If, for instance, they have either killed a person, seized someone’s property or committed any other crime against human life or property they will be tried according to the criminal law of Islam. They will not, however, be accused of either rebellion and high treason or of waging war against God and His Messenger.

You must shout a little bit louder, may be your idol can’t hear you.

However it was brought down, bit risky flying and the Syrian Army helicopter exposed itself to a lot of risk.

Syrians are brave people and the MI-8 is an old utility helicopter and not suited for low flying battlefield operations. They have the upgraded MI-24P Hind that can defeat any manpad as proven yesterday. 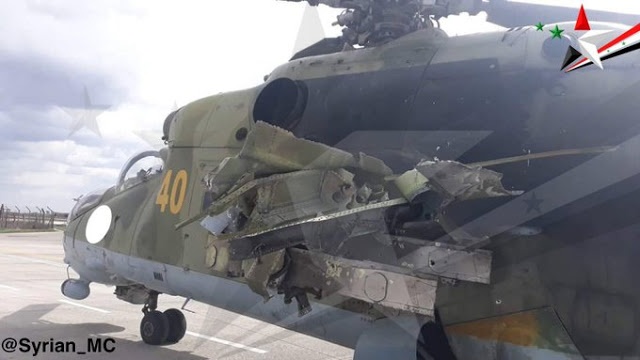 @Syrian_MC claims that hind took a hit from a 57mm shell not a manpad.

They must stop shooting foolishly into the air.If they do, they will win: D

This missile was fired by Turkey soldiers. As you can see the terrorists are impressed just by celebrating before the launch. Russia should neutralize this missiles from the navy warship.

Syria bombed that post and thats where 5 dead turks came from..

i smell Turkish forces downing the helicopter besides turkey wants to bring down SAA equipment so as to allow jihadists an upperhand.

It looks bigger than a manpad to me.
The scene in the video is mental.

Yes @ 0:41 there are turkish military vehcals also that many militants never ever gongregate around in extra large groups anymore ? or unless they are accompanied with turkish forces in which they are.