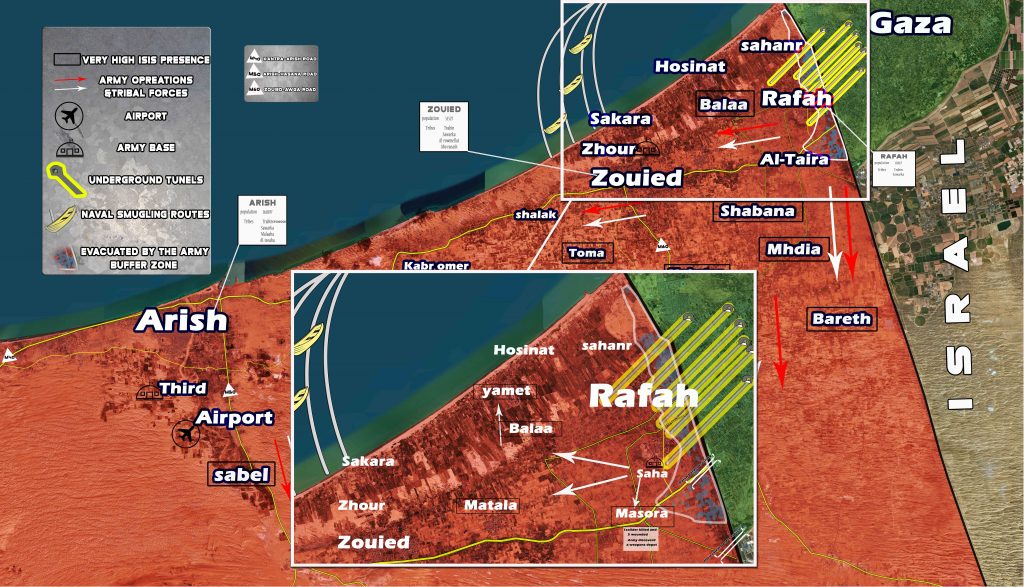 On August 21, army units deployed at the Saha camp launched a security campaign in the border crossing the area, including Masora, Balaa, Yamet and Matla. As a result of the operation, the army killed 11 terrorists and discovered an ammunition and weapons depot.

A soldier was killed and 5 others were wounded in an IED explosion in the Masor area.

Spokesman for the Egyptian Army released a video showing the destruction of 9 vehicles belonging to terrorists near the Libyan border.

According to the statement, a group of terrorist was trying to smuggle weapons and ammunition trough Egypt’s western border. Following the airstrikes, border guards conducted an operation against smugglers in the area. 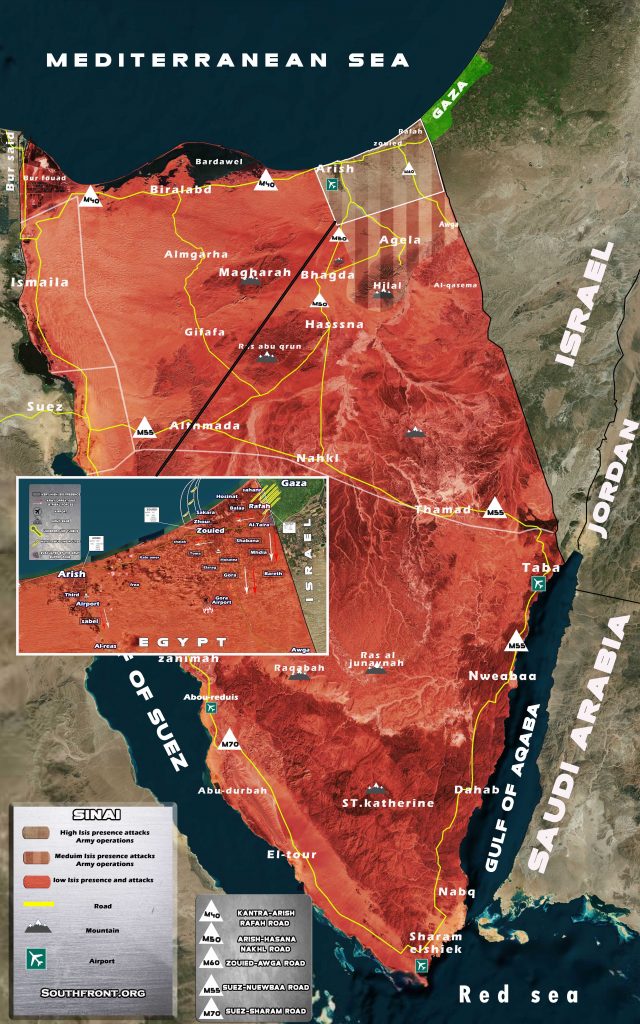 Egyptian sunnis are fighting each other and the dictator Al Sissi gave two islands to Saudi Arabia. XD.

The two islands are egyptians. Al Sissi gave them to Saudi Arabia to be sure that israel can always access the gulf of aqaba.

And I think that the reason why israel invaded Egypt in the past was because Nasser closed access to the gulf of aqaba. Now, these islamnds are for saudis and the access is always secured because israel end USA are ruling Saudi Arabia.

And I have not talked about shias because there are no shias in Egypt. Always sunnis are creating troubles because they are stupid and violent.

the two island is saudis and the egyptian and saudis are negoitating about giving them back to saudi,, in the fact in 1950 after 1948 war saudis hands them to us then we used them and closed gulf of aqaba two times one at 1967 and 1956 after 1956 egypt comitted to un resloution and peace treaty which will allow israel The right of innocent traffic (accordong to international law ) trough tiran strait second thing (United Nations Convention on the Law of the Sea) 1982 stiplauted that tiran is an international strait where egypt canot close in the face of any ship third thing egypt is admistration the two island and have no sovernithy over them this area is located in the area G according to camp david peace treaty where egypt canot delploy heavy military equipmets As to sunni and shias we have a shia minority in egypt but we treat them as egyptian citizens we are not sectarians and thank you for stupids

Bullshit. These two islands are egyptians. israel always wanted to prevent Egypt from keeping them because they are strategic islands. that’s why each time israel invaded Egypt, they took the islands.

What the f*ck the UN has to told you what to do with you territory ? XD. Of course, USA used the UN to lower sovereingty of Egypt to these islands to benefit for israel.

And, the Muslim Brotherhood are not at all a terrorism group. They even been part of the fight against britsh colonialism. The MB has been elected democratically.

So, you loose because you are stupid and weak. You give your land to others and you say that you have won. XD. Well, no more talking is necessary.

the Muslim Brotherhood are not at all a terrorism group. you didn’t know the history of this group or their role i recommend you to read about (sayed qetb) and the relations between uk and MBs and who actually create MBs read and you will know who they are what they do the terrorist ideology emerge as for two island the conversation are not constructive since you didn’t have the strong argument and all your information from western and colonial Main stream media and even you didn’t provide any information actually and well we never gave our land to any one and indeed we won Thank you we are stupids

“The Muslim Brotherhood are not a terrorism group” Even though Obama , gave the Muslim Brotherhood 800 million in order to get elected in Egypt , they were not honest about who they were . When the Egyptian people discovered they had been deceived , they took to the streets in the hundreds of thousands , and not just in Cairo ,demanding the army throw them out . And after a few weeks the army had no choice but to obey the will of the people .

BULLSHIT. “When the Egyptian people discovered”. After just 2 years, they are deceived ??? XD.

Are they deceived by Al Sissi that gave 2 beautiful and strategic islands to Saudi Arabia ? XD.

You are so Serious ; but you refuse to learn anything . There is a vast difference between Sunni , and Wahhabi , or Salafist , Sunni . The latter are “Taqfiri” , meaning all other Muslims must be converted to Salafism or killed as “apostates” . Ahmed Sayed Abd El-Naeem , may be Egyptian , or not , but he does know the history of the islands better than myself , and I would guess you . As he put it , “revise your informations” .

He knows nothing. He is just repeating what suits to huim. He doesn’t want to see.

Listen to the Egyptian. He ought to know if the islands are his or not. PS. He says they’re not. And unlike Americans, Egyptians actually get an education.

The savage enemy is Wahhabism.

Sissi is not Monotheist. He is more like a godless dictator who would never stand up in an election. The Egyptian people need to learn how to stand up for themselves again!

I love the way the Godless get the blame while the Godful do the shooting and the bombing!

And what is funny is that Morsi has been arrested because he was a “traitor” or something like that. And, then al Sissi gives two strategic islamnds to Saudi Arabia. XD.

Lol El Sisi supports Assad and Morsi (the leader that you like so much) called Gadaffi a dictator and funded (with help from Western countries) many terrorist groups in Libya to overthrow Gadaffi. He killed countless Libyans. People call El Sisi a dictator because he doesn’t lick Western leader’s boots

I don’t like Morsi. I don’t give a shit about him. The fact is that he has been democratically elected. The terrorists in Syria and Libya have not been elected.

Democratically elected? Lmao Yeah, US and other countries sure didn’t play any part in helping Morsi win the election lol That election was a sham! Terrorists in Syria and Libya not elected? Did you just call Assad and Gadaffi terrorists? Sorry to burst your bubble, but Assad was democratically elected as Syria’s president with majority votes and Gadaffi was supported my majority of Libyans

Wrong. Morsi has been democratically elected. Tomorrow, you made another election, he will win again. The dictator Al Sissi has not been elected and is a criminal. He has been supported by Saudi Arabia and israel. Even, Saudia Arabia called Muslim brotherhood a terrorist group. Of course, after that, the dictator Morsi gave two islands to Saudi Arabia.

I didn’t call Assad and Ghadafi terrorists but the “rebels” sponsored by USA are terrorists and have never been elected. In Egypt, we didn’t see armed group killing egyprtian soldiers. And the west didn’t bomb Mubarak.

So, I think you are wrong.

If what you are saying is true then I have some questions for you:- 1. Why did Morsi support US/NATO rebels in Libya who killed countless Libyans and executed Gadaffi? Why did Morsi call Gadaffi a dictator even tho Gadaffi only wanted to drop US petrodollar and develop Libya? Gadaffi was also supported by majority of Libyans 2. If Muslim Brotherhood is not a Western sponsored group then why did Hafez al Assad (father of Assad) openly slaughter Muslim Brotherhood in Syria during 1980? Btw Assad’s father never killed any civilians. The article is baised https://en.m.wikipedia.org/wiki/1982_Hama_massacre 3. Why did US donate millions of dollars to Morsi’s party during Egypt elections? 4. Why does El Sisi support Assad and is referred as a dictator by Western countries?

1 – MB in Egypt didn’t kill nobody. If they have done that in Libya or Syria, I would have said nothing about that. But, in Libya and Syria, the MB don’t have the people support unlike in Egypt. That’s why they started killing gov forces and even kill syrian civilians. 2 – MB is a sunny organization. So, they are stupid. Morsi did a big mistake by supporting the “rebels” in Libya and Syria. And then, he has discreditted his own organization and the way they gained power. 3 – USA gives money to every part. Like that, USA always wins.