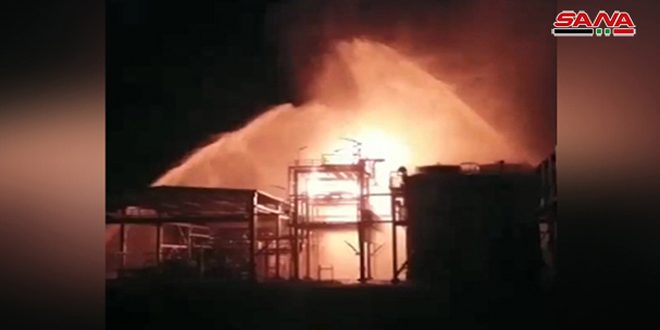 On January 4, militants attacked the Al-Rayyan gas station, the South Central region gas factory, the Ebla gas factory and the Homs refinery, Syria’s state-run news agency SANA reported. According to the report, the attack was carried out with shells dropped by unmanned aerial vehicles.

Minister of Oil and Mineral Resources Eng. Ali Ghanem said in a statement to SANA that terrorists and their sponsors have gain targeted the oil sector and its facilities on Tuesday dawn, particularly Ebla Gas Factory, South Central Gas Factory, al-Rayyan Gas Station and Homs Refinery.

Minister Ghanem added that immediately the firefighting brigades which are affiliated to the oil facilities and the civil defense were able to contain the fires which resulted from the attack and they extinguished them.

He noted that the technical cadres have started the process of damage assessment and the maintenance works at the damaged units, adding that the cadres have been able to alleviate the mitigate damage and ensure the continuity of gas flow to the generation plants as usual.

Minister Ghanem indicated that some of the damaged units have stopped partially, but there will not be a large effect on the issue of the local market’s supplies.

This was the second such attack in two months. On December 21, 2019, the Homs oil refinery, the al-Rayan gas station and a gas processing facility became a target of the similar attack. The attack placed many sections of the targeted facilities out of service and caused several fires, which were put down immediately by the Syrian Civil Defense (the real one, don’t mix it with the so-called White Helmets).

According to local sources, the attack was carried out from the Homs desert area, where ISIS cells still operate.

America the cockblocker, who would have thunk you had sunken so low.

If there are not anti-drone weapons guarding these vital facilities, why not?

A different conflict Mike, but it explains the mindset of the UK/US.

Without the internet we would not be discussing any of this.

Free speech will always be under attack, and it has to be upheld by as many as possible! The ironic thing is that all this current anti free speech activity originates in the US, the land of the free. (Not only there of course.)

Its the same shit in the UK really. Even saying ‘Something that may cause distress’ to the permanently offended is a Hate Crime, IF its suits the politicised cops to do so.

And meanwhile, the SAA keeps coming, and they’re coming for you, head choppers.

To stop the war target Israel with a few megaton

Zionist cancer in Palestine is the real cause of this constant regional mess. Unless Zionism scum are eliminated and expelled from the region, there will be no peace of justice. Zionism is toxic and parasitic.

The Turkeys are directly responsible for attacking the Syrian civilian infrastructure based on their Zionist masters model.

amerikan logic in action….they fund and train these ISIS/HTS cretins…then send obese incompetent US soldiers to steal Syrian oil…so that their HTS proxies can prevent them from stealing this oil “Amerika is a culture of stupidity”. Arthur Schlesinger Jr.