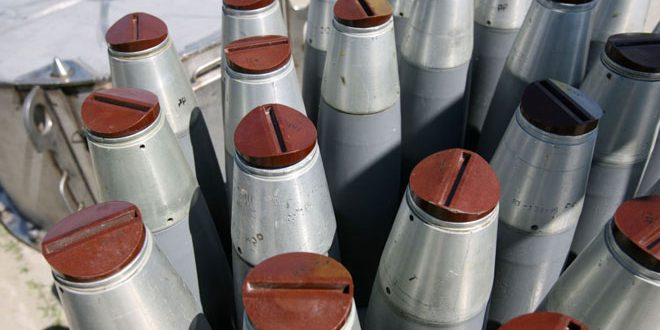 Militants are preparing a new chemical attack in the Ma’aret al-Nu’man area in the Syrian province of Idlib, Interfax news agency reported on Januart 15 citing own sources.

According to the report, militants store toxic chemicals in several warehouses across Idlib province and the far northern part of Lattakia province.

The source stressed that Ajnad al-Caucasus, Jaish al-Izza and the Turkistan Islamic Party [all linked to Hayat Tahrir al-Sham] are preparing for a series of synchronized chemical attacks in the provinces of Lattakia, Idlib, Aleppo and Hama. The militants are reportedly planning to use shells and mortar mines as well as drones loaded with toxic materials.

The same report said that militants have shipped 500 liters of chemicals to the Abu al-Duhour and Helfaya areas in the Idlib de-escalation zone.

The source added that in December 2018, some 30 militants arrived in the Ariha area in Idlib province to make shells loaded with toxic chemicals. These militants reportedly receive assistance from foreign intelligence agencies. The very same militants were reportedly tasked with carrying out chemical attacks against civilians. These pre-planned incidents will be then used to accuse the Syrian Army of using chemical weapons.

If really any chemical attach occurred on anybody in the region. To be honest you will see the Al-Qaeda humiliation. You know Zionist, ISIS and Al-Qaeda financed by US.

Hear we go again….. When all this will be stopped….

Which group are you talking about? Are you saying because of what isis does is the fault of syrian arab army?

No he is right. He saying that in Syria their are different stogies that fight for Zionist agenda. When they will become wise and stop fight.

These Islamic extremests are fighting away from Islamic idiology. The Islamic idioligy is, that this world is for all Muslims, Christians, Jews and atheists. Even the prophet Muhammed had visited their sick nonmuslims fellows and have protected and sheltered them from enemies attacks. The prophets are not only for Muslims but for entire world communities.

No surprise. Nothing in the mainstream media. Just wondering what their Sultan Erdogan is thinking about it?

Is this perhaps the reason that that US carrier positioned close to Syria?

now is explained the moves of the turkish removing their people from idlip, that allegedly lost the fights to the other partners of the turks isis.

Jaish Al Izza is FSA not HTS. Stop trying to pin the blame. Proper reporting is very specific, not vague, otherwise its just propaganda and never helps resolve anything.

Maybe Assad should call for al Syrian citizens that live in Idlib to move out, go to Latakia and / or Damascus and then he bombs the s h i t out of Idlib together with all the turco-isis-alqaeda jihadists in it !

Firstly, this chemical issue was leaked here by another poster before Christmas and most laughed at it.

Secondly, the other poster stated that x2 attempts at a chemical provocation (including a 3rd in Ukraine) have already been stopped / have failed. Again people laughed or dismissed it.

Thirdly, it was pointed out that the US Navy have warned they will not support the next joint UK-Israel provocation in Syria, hence the super-carriers being sent to home port as a symbolic statement, and the withdrawl of US Navy Seal teams (and other SF’s apparently) so they cant be used as Human sheilds by Israel.

Due to some other issues already reported on this site and elswhere, the British and Israeli false flag stagers need a distraction, and a big one, as the Russians have warned that full disclosure of joint British, Israeli, and US involvement in the Crimea Bridge Nuclear False flag attempt of Nov 18 is coming this year.

The risk following disclosure is that people with a brain that works will link small nuclear devices like the SADM recovered at the Crimea bridge to 9/11 – and then put two and two together to actually make four.

Apparently, the British are scrambling in panic and a new wave of psyops has begun in the UK to prepare the sheep, including a careful amount of desensitisation disclosure of mini-nukes.

I have checked this and even the mainstream media are talking about NATO SADM devices and blowing up bridges, albeit in a different context!

This popular British newspaper report came out today and is about as close to the bone its possible to get without blowing the psyop:’Soldiers were trained to parachute into battle with miniature nukes on their backs before blowing themselves up during the Cold War’: https://www.dailymail.co.uk/news/article-6593155/America-trained-soldiers-parachute-battle-wearing-backpack-nukes-Cold-War.html?login#readerCommentsCommand-message-field

According to Vesti News, Ukraine are now talking about ‘Earthquakes’ bringing the Crimea Bridge down and various other nonsense. Clearly Psyops are now in play by both Russia and Ukraine (in addition to UK, Israel, and US!) regarding the Crimea Bridge. In this video one of the guests even uses the term ‘Psychological Warfare’. Is Mini-Nuke / SADM / Nuclear disclosure regarding the Kerch Strait incident (which will be linked to 9/11 by many) coming soon?: https://youtu.be/jpaTZwHxTJk

If really any chemical attach occurred on anybody in the region. To be honest you will see the Al-Qaeda and their financiers US and GB humiliation. You know Zionist, ISIS and Al-Qaeda financed by US and GB.

Always seems to occur when UK govt has Brexit issues and the establishment is cornered (or in a tight place) by British populists over leaving the European Union.