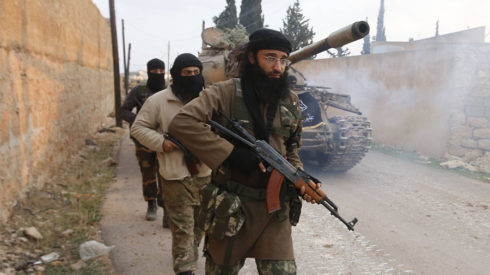 Hayat Tahrir al-Sham (formerly Jabhat al-Nusra) has brought more than 20 containers with chlorine to a village in the Syrian province of Idlib, the Russian Defense Ministry said on February 13.  The ministry added that Hayat Tahrir al-Sham and the White Helmets are now preparing a provocation against the Damascus government in the area.

“On the evening of February 12, the Russian center for reconciliation received a telephone call from the resident a settlement in the Idlib province, informing about a forthcoming provocation, using poisonous chemicals, to air it on a foreign television channel. According to the person, on the afternoon of February 12, the al-Nusra Front [Jabhat al-Nusra] militants delivered brought more than 20 bottles of chlorine and personal protective equipment on three cars,” the Russian state-run news agency Sputnik quoted the ministry’s statement.

“At the same time, correspondents consulted with someone via a satellite phone in English. Information received from a resident of the province of Idlib, causes serious concern of the Russian Center for reconciliation of the warring parties in Syria,” the statement continued.

America won’t give up. This is just nasty.

Americans gave up when they elected Trump to stop this insanity. And the Jews coerced him into continuing it with their impeachment campaign.

More like America tried to do something about it by electing Trump, who promised an end to foreign adventures, only for him to make a full 180 in office and adopt a neo-con agenda.

On top of the impeachment charade, the sanctions bill passed the Jew swamp with a veto proof 99% majority. Inside the DC beltway and a 50 mile radius of NYC is Jew occupied territory. Where legislation is constantly passed contrary to what’s in the national best interest and what most Americans want.

Of course they won’t give up cheaply. They will have to be made to give up! Let us wait until Russian elections are over!

I hate war…y cant they wave the white flag

They did in Vietnam and Korea!

Jihadists actually believe they are killing for God . Politicians think money is God . The rest of us thank God we aren’t either of the above .

And the Oscar goes to……… White Helmets…..

Meanwhile, Putin is busy cutting deals with the Americans and the Israelis.

Many commenters here find all kinds of excuses as to why Russia isn’t or shouldn’t be acting for forcefully in Syria. Meanwhile Russians are being killed by Americans..

The biggest excuse being that WW3 is not very far away. Often restraint is needed to save lives.

The Syrian government coalition is winning the war. Thanks in large part to Russia. Though all of the coalition ground forces deserve a lot of credit also.

There is no escaping this fact.

Putin’s actions show that he’s a crypto-zionist traitor to the Russian nation.

If proven to be used by US’s terrorists friends…no problem. Business as usual . Just make a press statements … warning Assad again and threaten…

If cannot prove terrorists used….ahah Tomahawk tomahawk…. use those lousy subsonic cruise at 1.5 million a pop …. everyone happy make lots of money

Is anyone not already expecting this with the recent gains in Idlib? I know Yanks love their sequels but how many times does a narrative have to flop before you retire the franchise?

Analogies with the entertainment industry are indeed germane for a group that already got it first oscar. I think the model is that one megahit can more than compensate for several flops. In venture capitalism it works the same way.

What is it with White Helmets and Chemical Weapons. Don’t they get sick of using the same script, blaming others and believing they can get away with it all? Or is that all they have left, following the success of Russia in Syria.

Who funds the White Helmets?

Now who were the 12 nations, besides the EU, who sponsor OPCW JIM?

Ma_Laoshi
Reply to  AM Hants

They ARE getting away with it all. What incentive is there to stop as long as the puppets still get paid, and the puppet masters haven’t yet been touched in any meaningful way.

AM Hants
Reply to  Ma_Laoshi

Failing that, give them an Oscar as a bonus gift. They talk about Hitler, but, the death kill was a lot less under him, than those running the NWO and crave pillaging the natural resources of others.

By the way, I don’t like either Hitler or Stalin.

northerntruthseeker .
Reply to  AM Hants

AM Hants
Reply to  northerntruthseeker .

Don’t they share there offices with Al Qaeda and whatever name the CIA terrorists call themselves, from day to day.

What does the goat ‘bride’ already in the bed think of that? Must be crowded.

White helmets operate at level of a terrible amateur theater group – always looking for new venues to reenacting their one script – written and directed by the ex MI6 agent who run the whole shambolic performance.

They would be well suited to serve Kiev. Both as stupid as each other.

True. They even won ‘oscars’ given to them by the CIA/Hollywood.

That list speaks volumes, however I am surprised about Switzerland.

Who lives in Switzerland or flocked there? Plus, neutral nations come in very handy, when needed.

Sure….. you can always dump your stolen gold there…….

Apache
Reply to  AM Hants

Success of Russia in Syria? Their contractors are getting bombed by Americans LOL

AM Hants
Reply to  Apache

You mean the US that are illegally there? How many US Body Bags, containing their mercenaries are being flown home or are they just left to rot?

You are right. In the next month or so, before the Russian elections, the empire of evil led by the U$ will do many destructive things to discredit and upset Russian successes in Syria and they already started doing exactly that.

RedBaron9495
Reply to  AM Hants

AM Hants
Reply to  RedBaron9495

I do like the work of Vanessa Beeley and what she has to say, with regards the White Helmets and their fake stories.

USA and Israel are really worry about the situation (their terrorists) in ibil and want to destroy Syria air force. For sure they will find the way to blame Syria of a chemical attack, this is for sure. The question is….will RUssia be able to protect Syria from Israel and USA air attack ?

Able or not matters little if you never even try.

These chemical weapons false flag attacks are the work of the same criminally insane Jew world order psychopaths who attacked the US on 911, covered it up, and suppressed a proper investigation to prevent the perpetrators from being brought to justice. So that the crime could be used to further their Jew world order hegemony drive.

isnt there a drone or a satellite or a cell that can observe the area? They should not have revealed the information. Look for houses or neighbourhoods with lots of kids or clustered families

While Russia dont deploy S-300/400 in Damascus and Deir Ezzor…USA and Israel will continue attacking SAA and disminish their capacity to fight vs terrorism in Syria!…look at Turkey..Turks deployed SAM system( Hawk) and Koral electronic warfare in North Aleppo near Manjib to avoid US attacks vs Turkish backed forces…otherwise surely USAF would have already attacked!

(…look at Turkey..Turks deployed SAM system( Hawk) and Koral electronic warfare in North Aleppo near Manjib to avoid US attacks vs Turkish backed forces…otherwise surely USAF would have already attacked!…)

Russia, Iran and SAA should do the same now. Enough is enough!

And what Putin and Lavrov will, ….bark like a dog

Nope…..just DESTROY the American proxy armies of Islamic Jihadi terrorists as they did with ISIS within Syria

And the same bad actors in western MSM will blame Assad again demanding the west mobilize to crush him and his allies in tearful grandstanding on the UN floor.

There are no bigger liars than the Americans and Jews

…so this time you’re (Russians) not going to say a word – just kill all them trying to bomb SAA?

Its no coincidence that Macron, has out of the blue said he will attack Syria “if” there is a chamical attack. There will be a chemical attack carried out by the US, France/UK among others & Israel, unless the Russians and Syrians get to the stockpile first.