On August 23, five service members of the Syrian Arab Army (SAA) were reportedly killed when militants targeted their post near the town of Hizareen in southern Idlib.

The al-Fateh al-Mubeen Operations Rooms claimed responsibility for the attack that was carried out with an anti-tank guided missile. The operations room, which include Turkish-backed groups and a number of al-Qaeda factions, is led by Hay’at Tahrir al-Sham. The attack is a blatant violation of the March 5 agreement between Russia and Turkey. A ceasefire was implemented in Greater Idlib under the agreement.

The SAA and its allies usually respond to such violations in Greater Idlib with artillery strikes or airstrikes in a few days, if not hours.

Turkey has thousands of troops in Greater Idlib. However, it is doing nothing whatsoever to stop the repeated violations by the militants. In fact, Ankara is providing the militants, including those linked to the al-Fateh al-Mubeen Operations Rooms, with military support.

These Turk-led terrorists are the reason the SAA can’t deploy to elimite the Zioterrorists’ other useful ISIS/US invader scum idiots in other parts of Syria. Did the ISIS/al-Qaeda missiles fly overhead the Russia-Turk joyride sightseeing tour before killing the Syrian soldiers?

The uncensored propaganda of the terrorist mercenaries shows what the real intentions of the Zionist-led Western governments are, in fact Marine Le Pen was investigated for having put a video of the so-called jihadists online, while the terrorists can do it freely without any of these evil Western regimes do something about it, Orwell would have a lot to learn from these damned fake democracies that censor any correct or incorrect version of the countries victims of terrorism. 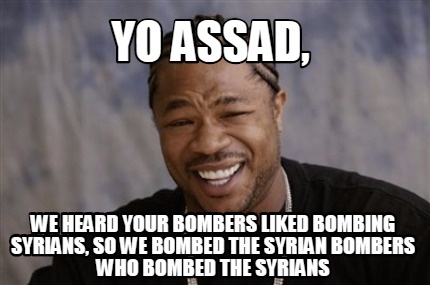 SAA and Iran better up their combat readiness as they are facing not just terrorists but Turkish, American(air), and Israel(air) forces in Idlib.

RIP.
You will be avanged.

he is already resting on PİECES..He is dead like t-rex…

Your wahabimossad toyboys will follow soon.
Dont worry.
Along with their handlers ;)

Idlib is getting smaller and smaller Shlomo.
Brace yourself…
Glory to Syria and the SAA.
Wahabimossad and CIAisis will cry and rage :)

ı wouldnt say that glory but its your way handling the situation..assad the animal will pay the ultimate cost…

Dont cry for your rapist cannibal headchoppers…
They are making good use of them as fertilizer.
Higher ranking members are being sent home in pieces in body bags on dry ice ;)

bullseye…but your choice is absolutely wrong….

for not supporting the the animal assad who is master at pulverizing children..ı dont buy it but you can you guys have fetish

not much than you Andrey…

More*
Sure you do…

Only a few crumbs.
They have to eat too :)

All these attacks because of that stupid ceasefire when the SAA were on a roll.

Unfortunately they die for Russians interests and assad’s regime doomed

Somebody commented earlier here ISIS has no missiles. Now they have.
What’s next?