The Syrian Arab Army (SAA) resumed its advance in the northwestern Hama countryside on May 11 after overrunning several defense lines of terrorist groups in the region.

According to several pro-government sources, the SAA captured the towns of Arimah, Maydan Ghazal, Bab al-Taqa and Shariaa. The Muraselon news outlet claimed that the army entered the southwestern countryside of Idlib and captured several positions there. However, these claims have not been confirmed yet.

This new advance was facilitated by doznes of Russian and Syrian airstrikes on terrorist positions, vehicles and gatherings in norther, northwestern Hama and southern Idlib.

In an attempt to recapture Arimah and the surrounding areas, Hay’at Tahrir al-Sham (HTS) [al-Qaeda’s former branch in Syria] launched a counter-attack. However, the SAA is reportedly still holding onto its new positions there.

The upcoming few hours may witness more advance by the SAA and its allies, as the remaining terrorist positions in northwestern Hama appears to be collapsing.

Terrorists moral at the moment 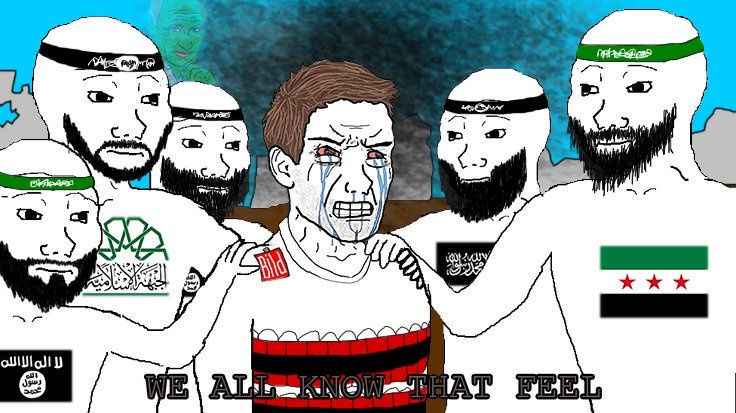 the glorious SAA on the offensive again….!take no prisoners!

The green buses strategy is working, these terrorists have very different ideologies and leadership, they wont get along. Im sure some Syrian mukabarat were sent in those green buses to stir this sort of chaos and divide them further.

Lol yea I remember the green buses, feels like so long ago

Now its time for rebels to understand that with them no option left. Therefore, they should drop weapons and help in rebuilding Syria.

As soon as possible SAA and allies should liberate Idlib.

Well the problem isn’t the “rebels” as most of the true rebels have already reconciled with the SAA during the northern HOMS and southern HAMA operation. All the other jihadis have been transfered to Idlib and the ones in Idlib sure as hell are not peaceful by any means nor do they want democracy but rather a islamic state. The only way to defeat these kind of people is to level them to isolate them and level them with the ground. That is why it’s vital that people can quickly evacuate before the SAA launches new operations in the area.

I have seen them before, but I cannot remember where; where are their helmets from ?, do not say Syria.

abuqahwa
Reply to  You can call me Al

That could be it… thanks.

I thought at first Russian so I searched away and got nowhere….

WANTED: Submariners who like adventure and deep water…….. see your Indian Recruiter Today for the thrill of a life time.

Hopefully the advance using deconfliction agreements and clearing operations will continue now that they’ve resumed. Until Idlib is fully recovered to the Turkish border. And then the process of continuing to resolve the remaining SDF and Al-Tanf issues can be addressed from a stronger position.

Did you notice in the second video around the 1.50 mark the bomb(s) creates a massive smoke ring! I thought that was delightful.