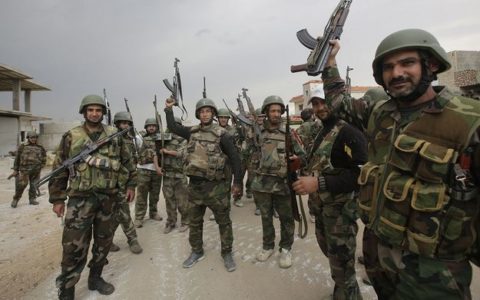 Militant groups have continued violating the ceasefire regime in the Idlib de-escalation zone [it includes Idlib province, northern Hama, northern Latakia and western Aleppo, the Russian Centre for Reconciliation said in a statement on August 21.

Pro-government sources in northern Latakia also claimed that the Syrian Arab Army has recently repelled another attack in the area killing at least five militants. While some sources even described this incident as an “offensive”, this is an overestimation. Sporadic clashes take place along the entire contact line between the militant-held and government-held areas in the Idlib de-escalation zone on a cosntant basis.

we know thats the excuse, can you begin the attack pls??

Kill the Idlibistani orcs…. all of them.

u people here are really a bunch of morons and donkeys….I remember…. as soon as Turkey ( a NATO MEMBER ) invaded Syria, with the OK from RUSSIA, I told u what the game plan was, and the danger that concearns US ALL.All I got back was childish pipe dreams and alot of swearing…….. U folks dont seem to understand……each (including Jabat al nusra,, the by far biggest group) terrorist group is allied with turkey, any attack by SAA will start open warfare with a NATO member with ALL the consequences………..for US ALL

Iran, SAA, Hezbollah have been very cautious all along not to let this happen since day 1…..dont get me wrong,,,they know whats happening…they know about the AGENDA…and the last thing those proud countries want is open warefare with them satanic jew slaves, but they are prepared to go all the way if no other choice…….and soon , very soon u will all see what I mean when SAA with its allied countries attack Idlib…..this war will soon change into a conflict involving open warfare between first SAA and Turkey, followed by Nato vs SAA , Israel/nato vs hezbollah in Lebanon, Iran openly involved vs Nato and finally russia……that was the satanic jewish plan from day 1……and they(satanic jews) are standing with their backs against a wall….they will do everything possible to make this happen NOW…..why??? they are loosing their most important asset they got today in the next couple of weeks/months……Donald Trump…..the rope is tightning, and they have to get started pretty soon

Yes, Idlib area is one of the most complicated area to fight due to NATO (Turkey) presence there with their supported terrorists. The main questions are ….. What is Russia going to do (besides the electronic war fare) to protect and support ground troops ?, Is Russia willing to fight against Turkey to recover the Syria land taken by Turkey ? Is Russia willing to shot down USA-NATO planes ? ….Israel is just right now watching the show created by it.

This is the peaceful region that the Washington Post accused the SAA and their allies of needlessly attacking?

Of course, and terrorists will continue doing so until Russia-Syria-Hezbolah-Iran be able to get rid of them.

It is my hope that Russia exterminates every last one of them, Its seems like they are the only ones willing and capable.