Members of the Free Syrian Army, Jaish al-Islam and Jabhat Fatah al-Sham (formerly Jabhat al-Nusra, the Syrian Al-Qaeda branch) are considering to surrender the town of Khan Shih to the Syrian army.

The town of Khan Shih is located in the Western Ghouta region, near the Syrian captial Damascus. After the Syrian army seized the Air Defense Battalion hill between Deir Khabiyan and the 137th Regiment on October 28, the militant-controlled area in Western Ghouta was splitted into two separate pockets: the Khan Shih pocket and the Zakiyah pocket. This destroyed the militants’ logistics in the region and allowed the Syrian army to start a military operation to liberate militant-controlled areas .

Today morning, the government delegation has arrived to Khan Shih to discuss with militants the terms and conditions of their surrender. The negotiations are ongoing amid the continued army offensive in Khan Shih’s countryside.

When Khan Shih is liberated, the militant-controlled town of Zakiyah and nearby settlements will also fall soon.

With recent gains in Eastern Ghouta (liberation of Tell Kurdi and others) the Syrian government forces have become very close to the full liberation of Damascus countryside from Western-backed militant groups. 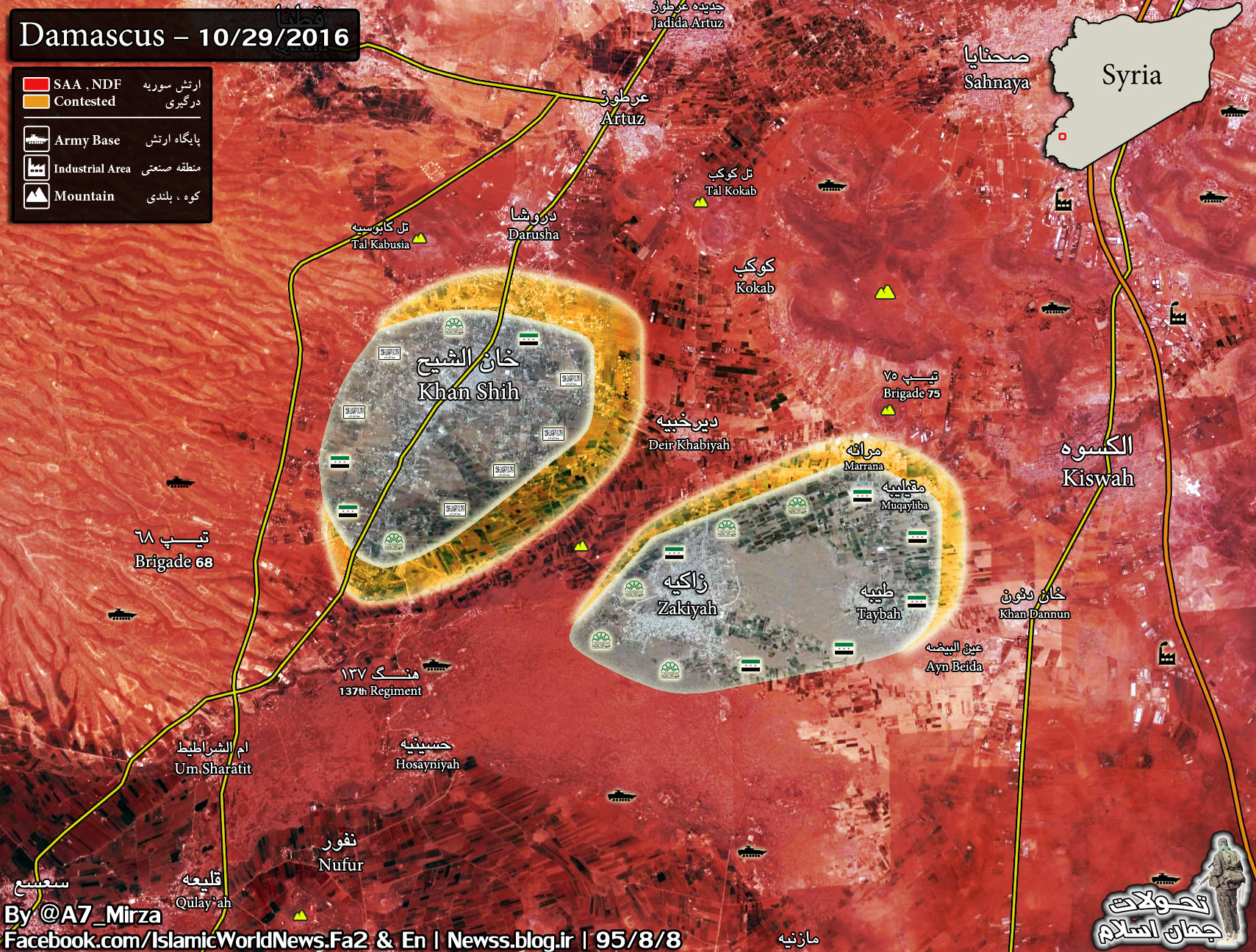 This is West Ghouta.

Yes, you are right. Thank you for the attention.

liberating pockets will also free up men and materials to be used elsewhere.

Great, now SAA and focus on Muqayliba and Zakiyah, since Taybah already agreed to peace deal of some sort, smart guys, they can later compare themselves to the flat plain of what was once Muqayliba in a month or so and understand just how excellent this decision was.

Send them all to Idlib… that way, they can occupy themselves with fcking some fresh goats until the SAA finishes with Aleppo and gets around to liberating the remaining terrorist-held areas. Then we get to kill them :-)

am from sahnaya north of muqayliba

Wow really? It must be pretty dangerous to live so close to an active combat zone, hows the life there? Ever considered writing an article yourself?

Do You want to understand why the Russians are so engaged in Syria and why the gulf oil-gas-dictators are feeding the war against Syria, Iraq & Yemen?

Follow the WATER ROUTES, You will find oil and money there, but also war, diseases and death!

Weather modification is an effect of TROPOSPHERIC WATER MANAGEMENGT !

It is simply not enough if You only look at only your small part of the sky and get annoyed about the pollution. When we talk about weather and climate, at least all the Climate Cell have to be observed.

Climate is mainly about WATER and SUNLIGHT. Playing with the sunlight impacts on the water balance of the Climate Cell. Look at the WATER ROUTES! Question why do they need to do that!

What we watch every day as filthy toxic DESUBLIMATION and condensation trails are nothing but the full implementation of the Industry for Tropospheric Water Management!

Get the whole picture, not just small snippets of Your sky!