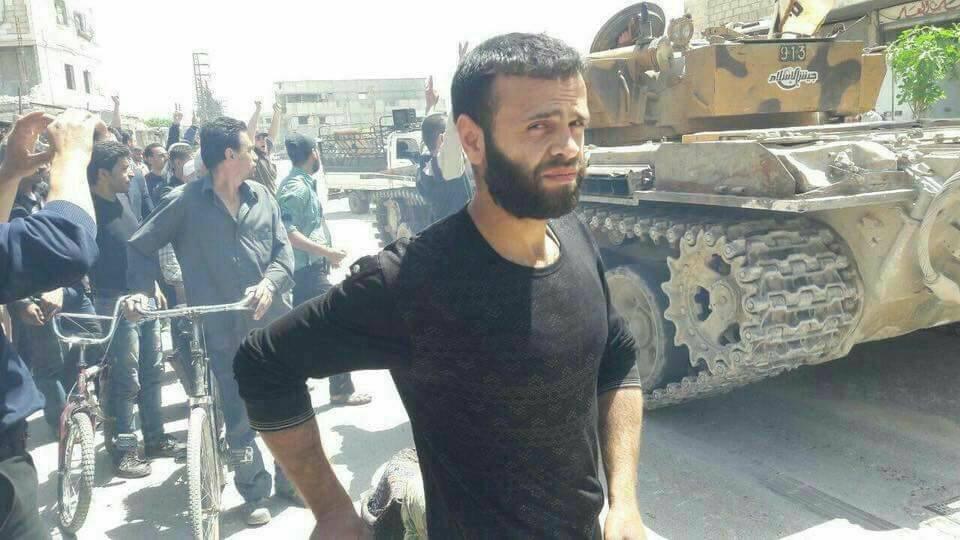 Clashes between Jaish al-Islam and the joint forces of Hay’at Tahrir al-Sham (HTS) and the Al-Rahman Corps continued for the second day  in the Eastern Ghouta region.

Yesterday, militants of Jaish al-Islam attacked headquarters of the Al-Rahman Corps and the HTS in the areas of Arabin, Kfrbtna, Al-Ashari, Madira and Haza.

According to pro-opposition media, a suicide bomber of the Al-Rahman Corps attacked a gathering of Jaish al-Islam militants in Eastern Ghouta in the morning on April 29.

Rebel Forces in Eastern Ghouta fired on protesters today, during the demonstration against infighting. #Syriapic.twitter.com/RIYY52VmVm

Jaish al-Islam sent tanks and armored vehicles to the clashes area and demanded HTS and the Al-Rahman Corps to surrender before launching the second attack. According to opposition sources, 30 members of Jaish Al-Islam, 40 of HTS and 20 of Al-Rahman Corps have been killed in this clashes so far.

The clashes broke out after the advance of the Syrian Arab Army (SAA) in the Al-Qaboun district in eastern Damascus.

Wa’el Alwan, a spokesman for the Al-Rahman Corps, accused Jaish al-Islam in participating in the siege of Al-Qaboun, where members of Al-Rahman corps , Ahrar al-Sham and the HTS were encircled by government forces.

Jaish al-Islam did not participate in the HTS-led attack in eastern Damascus last month. However, it was not able or didn’t want to prevent it. Later warplanes destroyed a number of Jaish Al-Islam ammunition depots in the area near the Turkish-Syrian border in Idlib in response for the group’s inability to maintain the ceasefire agreement in the area.

I think this is a result of SAA cutting many tunnels and arresting terrorist in the last few weeks. They realised that Qaboun will fall and they are next, SAA probably has intel on many of their tunnels in Ghouta area, storage warehouses, number of militants etc. They are effed!

Qaboun is 50 percent liberated . Once it is fully we are going Aleppo scenario . Ghouta thing can be ended by November .

That will be biggest victory for SAA since eastern Allepo

Yes . BTW SAA is 500 meters from cutting of Qaboun in 2 parts

Pinching out jihadist pockets with overwhelming force (even at the expense of Palmyra) is exactly what I though was the smartest course for SAA.

Well, the greater their territory, the more chance of someone having his own “war-band” … once the borders tighten up and in time when all have to fight in coordinated manner, people tend to argue, who is the bigger boss white the better plan. Now, thinking toppling Assad would magically make them sit in civilized manner and “define” their regions of influence in an new rule … while, the longer the war, the less capable people to argument whiteout guns.

This is opportunity for SAA to continue advances, while the initiative is on the SAA side

I don’t see anything moderate except that at one time the US diplomats said so until Kerry accidentally told the truth. There may be moderate rebels but these are not them.

Your sarcasm detector seems to be broken.

The more I read such articles, the more I conclude that this war will continue for a long time. Both sides are very cruel. Syrians are slaughtering Syrians from other religions and from their own.

Still lots of people left alive in Syria. How long will it take at the current rate until there are none? Let’s see. Syria has lost about 5 million over 6 years, leaving around 15 million, so at that rate Syria will be empty in about 17 years and will achieve the peace of the graveyard.

Most of the fighters are likely to be Syrian. But the involvement of foreign forces only complicates and prolonges this cruel war. There are no saints in this war.

Some are saving the country and some are destroying.

This is a sentence that both sides can say. The question is, how do you end this war ?

It seems that JAI have planned this . Here is map of East Ghouta and factions controlling it https://pbs.twimg.com/media/C-lRbBHXUAAF3Ve.jpg

I take it the JAI controlled area is light gray? They also hold the East Qalamoun pocket under a long standing cease fire agreement with Damascus. Is this correct?

Alloush people are the green . East Qalamoun is different . I am not sure . But our weapons given to the jihadists were found in Aleppo – Grad and etc . There could be something useful there . I doubt Turkey will attack the Kurds now except if Erdogan is very stupid .

Who attack from Jobar, it wasng JAI it was HTS

I hope this rancor and hatred spreads across western Syria so these groups can do the SAA a big favor by reducing their ranks and arsenals fighting each other.