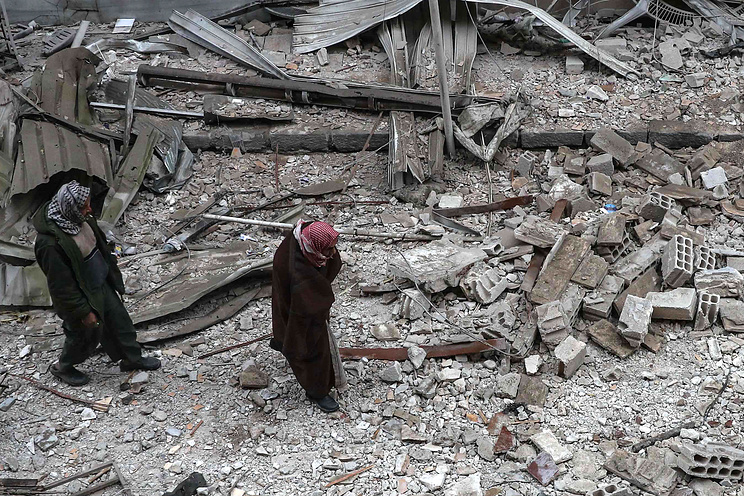 At 12:00 local time a humanitarian pause entered into force in the militant-held part of the Eastern Ghouta region, near Damascus on February 27.

However, according to Russian General Viktor Pankov, a chief of the group controlling the de-escalation zone in the area, civilians cannot leave Eastern Ghouta amid mortar shellings of the humanitarian corridor near Vafidin.

“At 9 am on February 27, a humanitarian corridor was opened for the release of civilians from the zone of de-escalation. Currently, militants launched intense shelling and not a single civilian has come out,” Pankov told media.

On February 26, the Russian Defense Ministry said that a daily humanitarian pause from 09:00 to 14:00 (local time) will start in the East Ghouta region near Damascus on February 27.

Now what is the USA/NATO and puppets UN Security Council saying.Because their terrorist are obstructing peaceful movement’s of their terrorist family and ordinary civilians.

You know it, they will lie and spin it against Syria and the Russians „Assad is shelling the corridor, and has again hit 16 hospitals in the pocket, Russia is a lier and commits warcrimes“.

” and has again hit 16 hospitals in the pocket ”

You forgot the 100 nurseries, the 150 homes for orphaned cats and dogs, plus the 20 Oxfam homes for girls and boys in need of adult ‘care in the bedroom ‘.

The Hosptals are putting up a tremendous fight,,they keep rebuilding themselves after getting bombed by the Syrians,,,miracles do happen.

I am told that the ‘ Hospitals ‘ are of an Israeli design that specialises in human organ harvesting . They often pop up in conflict zones :)

Their planning obviously another blame game.

As always the US Coalition of Terror will be silent about facts that do not accord with their Machiavellian ideology.

This is a repeat of Aleppo. It is a weird game to prevent the US and it’s allies from having any type of legitimate reason for intervening with force. Syria and Russians setup the escape corridors and the jihadist rebels bomb them to prevent any civilians from using them. This and the continued launching of mortars into Damascus with the resultant civilian injuries is all Syria needs to continue bombing and killing the terrorists. Everyone agrees in the concept of self-defense of a nation-state.

Absolutely correct. It’s a complicated dance to defuse the OUTRAGE that the Western MSM is trying to whip up just enough to stop the US and its NATO puppets from intervening.

Does make one wonder what the Russians are up to. Why Russia and Syria even bother talking to the US and coalition let alone the UN is difficult to fathom. What should be done is give the UN, US and EU an option; get out of Syria, Balkans and lay off NK or Russia will nuke them. Simple choice, WW3 or peace.

You seem to think Russia has the same mentality as anglo-zio empire.

The Russians are playing the long game. They don’t care that much about the concerns of the US as the US only understands force and counter force (think SU-57 planes to counter any proposed no-fly zone by the US). I see a lot of what Russia is doing is to show Chancellor Merkel (who specifically asked President Putin to protect the civilians) that Russia is a competent partner willing to take their concerns into consideration (something the US doesn’t do). You have to remember that Germany is going to allow the construction of the Nord Stream 2 pipeline which means Germany is choosing Russia over the US as regards energy, a major decision. This is happening all over the world, as the US is forcing nation-states to choose them over China/Russia and significant countries are making an anti-US choice as it’s simply in their best national interests and China/Russia are offering a viable alternative. This is the continuation of the shift from a uni-polar to multi-polar world. It should be over by the next five years.

There are so much fake news propaganda against Syria and Russia on MSM that boggle the mind. US and UK want to protect their terrorist organizations in Syria with all respect. US and UK morons have brought Palestine, Syria and Yemen to the current devastation stage.

Yes, what the US has done in trying to remove President Assad resulting in such suffering and destruction is criminal and for what? The state of Israel must learn to peacefully live with its neighbors. This is insanity.

This is the statement of Jewish community that the Israel whole state is illegal and would be dismantled like ISIS state. Israel are not Jews. Israel consider themselves Zionist instead of Jews. Zionists are brutal and have no religion.

Syria and Russia should not hasitate in taking out all terrorist hideouts from Syria alongwith their training centers and bases that US, UK and France have oppened and bring law and order as soon as possible to the whole Syria. Please don’t let US, UK and France to take land from Syrian nation. Ignore west MSM and UN. Be brave. God protect you all from evil US, UK and France.

This is a pity sham on neighbour Muslim states that from different countries nations migrated to Palestine, took Palestinian land and created Israel and they couldn’t stopped them. Even few of them recognized illegal migrant state.

I’m sorry but they are no militants, the gross are stupid followers payd like cheap mercenary while their leaders grab the big bribery money, they all just excecute US orders ! in the meantime they oblige , with hands on the by US and Co delivered weapons a majority to remain silent and use them as shooted ducks !

Russia is probably the one doing the shellings and blaming the rebels. Do they really think anyone is going to buy this report. Russia truly lost all creditable in Syria

Do you really think that someone will buy what you say? You that support the same terrorists (Al queda = HTS) that killed thousands of your compatriots in NY?

The entire Terrorist card or false flag. Is outdated. This people are muslim and have been that for centuries and I don’t see them changing that fact and anyone willing to fight them just because of that is on the wrong. Russia is in a pointless fight with these rebels

BTW I don’t support Israel , I just dislike you and your bot friends.

This is the dumbest reply in a while – so Russia votes infavour of the UN ceasfire resolution, sets up humanitarian corridors with a daily set hours ceasefire & you ignore the obvious conclusion thats its the militants who are shelling the civilians because they needs them as human shields. Great logic

all the sources coming out of Russia is basically BS.. they also denied the now famous wagner group incident..

Insert the “US” instead of Russia and you are so correct and wouldn’t be far off the stupidity that permeates today.

Mountains of Shite spewed forth ad nauseum by Zionist Troll. As I have written on many other occasions all that spewing of shite has left the Mountains hollow who will soon implode when the SAA root out these Yankee and Izzy paid vermin…

The biggest mouth terrorists are Nikki Hately,Boris the UK clown,and the french mouth piece..They are crying for an excuse to turn Syria into another Libya,Yemen,Iraq etc.