Russian and Syrian warplanes carried out on November 8 a series of intense airstrikes on militants’ positions in the northwestern governorate of Idlib.

The intense airstrikes targeted the towns of Kafr Nabl, Aldar Alkaberah, Tell Mardikh and Hizareen in southern Idlib as well as the city of Jisr al-Shughur and the village of al-Z’ainiyah in northwest Idlib.

According to the UK-based Syrian Observatory for Human Rights (SOHR), at least two militants were killed as a result of the Syrian, Russian airstrikes.

A day earlier, a series of Russian airstrikes on Idlib claimed the lives of at least three militants of an unknown faction.

These airstrikes by the Russian Aerospace Forces and the Syrian Arab Air Force (SyAAF) are likely a response to the repeated provocations by the remaining militants in Idlib.

Run rats run runn.. and never stop..
There’s no holes in the ground to save you…
Scumbags
Scum of the world

2 dead???? u got to be kidding and calling this “more casualties”……at this rate Idlib will be freed in the year 2073!!!!…. this ridiculousness just proves that all of These so called “intense airstrikes” are just Propaganda for the donks….there are 20,000+ jiadi terrorists in Idlib!!!! it is a Farce what Putin is doing/ordering!!!

death to america death to Israel curse on the jews ..go houthis

why have they always got a camera pointing at the target several seconds before the bomb hits it? why is it always the same voice commentating. why do they keep saying alahu akbar

Because on several plases RuAf inform them where they will hit in advance. Maybe three positions no more.
Never mind for why they shout what they have been shouting for years, they are Wahhabis, and therefore not Muslims at all.

Camera pointing straight at the target. Must be a children’s eye hospital.

I’m afraid when the Idlib operation finally starts, the SAA won’t have the same momentum like after the Daraa operation last year. When they would have launched that operation directly after Daraa, the battle would have been way easier, because Turkey tried to defend Idlib and its terrorists and united many of the groups into the “NFL” and allowed the terrorist to set up defenses and regroup. After the Abu al-Duhur operation HTS was very weakend, the SAA could have liberated all of Idlib. Erdogan should be punished for that.

Daraa was the hardest part, they just couldn’t did both. This goes slowly, but steadly. Just wait and see.

Who said they wanted to do Daraa and Idlib simultanously? The Daraa operation lasted from June to August. The Idlib operation should have started in September. At the beginning of September, Russia started using its cruise missiles and rained hell on the terrorists in Idlib. The SAA had a huge momentum from the Daraa operation, but then Turkey intervened and caused the mess the SAA has now.

Looks like BBQ’ed jihad is back on the menu again boys. 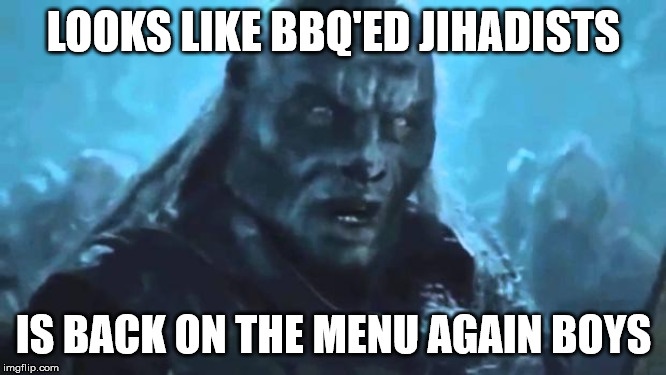 Keep this saved – after you read it all.