Former Donald Trump’s national security adviser, Michael Flynn, has agreed to testify about alleged attempts of Moscow to influence the elections in the US in exchange for a protection from the criminal prosecution. 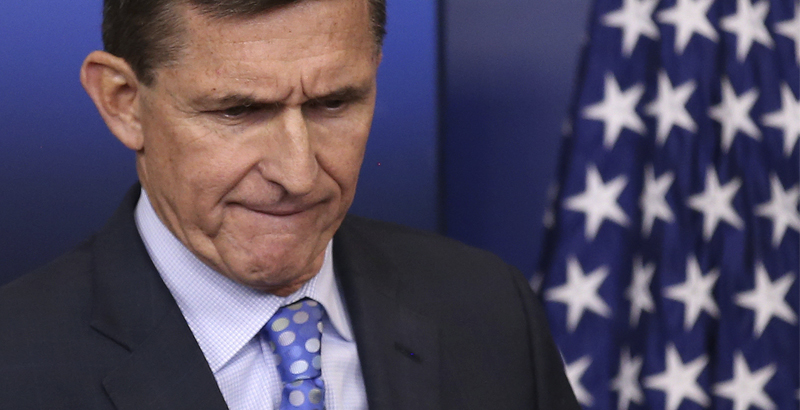 Former Donald Trump’s national security adviser, Michael Flynn, who resigned after a scandal over secret negotiations with Russia, is ready to tell under oath everything that he knows about alleged attempts of Moscow to influence the elections in the US. In exchange for the testimony, Flynn demands a protection from the criminal prosecution.

“General Flynn certainly has a story to tell, and he very much wants to tell it, should the circumstances permit,” Robert Kelner, a lawyer of the former adviser, said. However, he also added that in return Flynn needs protection against “unfair prosecution.”

“No reasonable person, who has the benefit of advice from counsel, would submit to questioning in such a highly politicised, witch hunt environment without assurances against unfair prosecution,” the Telegraph newspaper quoted the lawyer’s statement.

US President Donald Trump has commented on the reports on Flynn’s readiness to testify and advised him to seek immunity from the criminal prosecution.

“Mike Flynn should ask for immunity in that this is a witch hunt (excuse for big election loss), by media & Dems, of historic proportion,” Trump wrote on his Twitter.

Mike Flynn should ask for immunity in that this is a witch hunt (excuse for big election loss), by media & Dems, of historic proportion!

Meanwhile, as the Reuters news agency reported, senior Democrat in the US House of Representatives Permanent Select Committee on Intelligence, Congressman Adam Schiff, said that he was outraged by the demand of the President’s ex-adviser.

Schiff called this Flynn’s requirement “a grave and momentous step,” and promised to discuss any such demands with the US Department of Justice and the US Senate Select Committee on Intelligence.

On Thursday, the US Senate started hearings on the influence of Russian hackers on the election campaign, as the result of which Trump became the US President. Deputy Chairman of the US Senate Select Committee on Intelligence, Mark Warner, accused the Russian authorities of trying to interfere in the course of the presidential election.

The Senate’s investigation should allow finding out whether the alleged Russian cyber activity and other possible actions of Moscow were directed against the US and its allies, as well as what leaks of classified information could occur.

Flynn resigned after press speculated that the General misinformed US Vice President Mike Pence and other administration officials about his communication with Russian ambassador Sergey Kislyak. There also were questions about Flynn’s lobbying activities in favor of Turkey, for which his firm received $500,000.

Adam Schiff is from the Schiff-family. Jacob Schiff , founder of Kuhn&Loeb , was the first financer for the buildup of the japanese Navy to meet the russian Navy in the battle of the straits of Tsushima 1905. He is one of the most important Russia-haters in history. He was also the buddy of Rockefeller for organizing the trip from Trotzki to St,Petersburg 1917. Seems to be that Adam Schiff is a true descendant of that genes and ideas.

The US today is in a very dark place where Zionist Libtards have been thwarted in their attempt further dominate the world bu using US Military might. This is all very similar to the Zionist Marxist Leninist takeover of Russia by another parasitic gang of thieves and who had once emigrated to the US.

The Schiffs of this world have always worshipped power and money and care little how many die in the process.

We may yet witness a civil war in the USA. :)

Remember that liberals are not the only threat, as neo-conism is just as bad.

I hope Trump will be killed. By a sniper. I hope in a civil war :D