Militants besieged in the city of Daraa are currently preparing to surrender under the pressure of the Syrian Arab Army (SAA) and its allies, according to pro-government sources.

On July 6, a large reconciliation deal was allegedly reached between the Damascus government and local militants with an assistance of the Russian Reconciliation Center for Syria.

However, this is unlikely that they will be able to defend their positions successfully in case of a real advance of the SAA. Thus, they will be forced to implement the deal soon. This is very positive.
Nobody want’s to have to fight in dense S Daraa.

Syrias enemies do. But there doesnt seem to be anyone fighting for them here.

Many ongoing talks as they might be more surrenders and reconciliation as talk is Tafas is ceding to the SAA if so only leaves Khaled Walid Army (ISIS) or Israeli Shin bet and Shayetet 13.

Looks like a domino effect. Many FSA groups will agree to SAA terms. now that HTS is weak. But the ISIS area and FSA north of there may be willing to put up a fight. SAA should push them against the Israel occupied Golan border.
Then what does the map tell you. :DDD

Well done SAA and their allies.

some FSA commanders traitors surrendered expenseive equipment, tanks and anti tank weapons and fled to Jordan, the got the money from Iranian banks, i hope that Mossad agents will kill such traitors, no mercy for these shity FSA traitors and his wives, good hand for Mossad agents for kill traitors

You are having an attack of impotent rage in a place where the answer you get it’s laughs.

Means you got to go do your dirtyy work yourself..

At least the SAA will have the bonus of being resupplied with all these new weapons surrendered by the militants. Some good equipment too.

This along with Fatty Boris going out the door is a great day for the Syrian Government.
THE ASSAD CURSE IS ALIVE AND WELL! 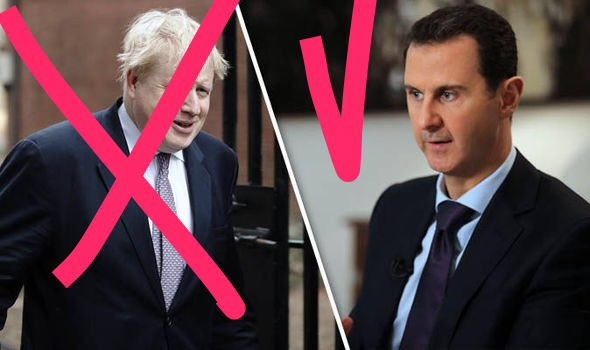 What President Bashar al-Assad and Syria (and their allies) have done these last few years, standing their ground and defeating the combined forces of the West and its Islamist allies, is the most thrilling and encouraging political event in my lifetime…and I’m 64.

Living in the U.S. is truly being in the Belly of the Beast. And watching the war criminals (Obama, Clinton, Power, et al.) and their complicit media constantly lie and threaten Syria has been the most disgusting thing I’ve ever seen.

Do not forget the Bushes and their 9/11 false flag.

Everything will be alright. On July 16 in Helsinki, Putin and Trump will agree on the spheres of influence.

Including modern capitalist Russia. The leadership of any major power is always a lash in the blood.

It’s good that ordinary citizens like you do not support it.

The behavior of the United States as a state in the international arena is primarily due to the fact that the country is fed by the self military industrial complex – without wars- Usa economy can not work , and foreign policy is dictated not only by lobbyists, but also by internal political strife in the country.

In the United States, a strong public split, this was shown by the election of Trump.

There is no confrontation Usa- Russia – because ideology now same- both capitalist countries, there are only interests, and we will balance the United States in huge appetites and everyone will continue to live and develop.

The dumb idiot Boris himself is gone.

All British government will go incl. Therese May, very soon…they are dishonest and untruthful. Especially with Novichok event. We will know the truth, how it was. According to British government, the was used Novichok nerve agent against Scripal duet, but there were no dead bodies, untill last week. Now, the two junkies died, supposedly by Novichok contamination. They dig around the garbage at Scripal house…another tale from Brithish mainstreem media. Now, they have a story about the dead bodies…

Ship the Orcs to Siberia! Get those old gulags back in use!

The zionists in hell aviv are hopping mad,,,their greater israhell plan is going up in smoke,lol

Question: Why exactly are the jihadis folding so quickly? I’m curious.

We know their American masters told them they’re on their own, but beyond that?

Tony B.
Reply to  palebluedot

What we don’t know is what Russia has told both the U.S. and Israhell.
There is still all of eastern Syria to retake.

palebluedot
Reply to  Tony B.

I’m really hoping for a reconciliation between the Kurds and the government.

Then we’re still looking at the jihadis in Idlib, and moving Turkey out.

Once ISIS is defeated in Syria the SDF hand everything over to Syria and will be worried of US fighting them Tev-Dem has no power or authority to make deals.

Their supply routes from Jordan have been cut, no bullets, no fighting.

It’s a beautiful thing to watch. Abdullah II of Jordan had done his part in selling out his Arab neighbor to the West and the jihadis. Now Putin has convinced him that it’s time to get off his hands and knees, and encouraged him to be a man.

Deraa, like Douma , had a lot of time to build tunnels. May take time – time enough to fake another chemical attack. Paris, London, and DC just needs to coordinate their calendars and prepare the same script. The militants can make a video as easily as putting on a hat, a white hat.

Locals are ratting them out so easy on chemicals right now no way to escape from there Idlib is the next big attack. So far in Northern Latakia several dozen HTS members are dead after confronting SAA , Jisr al sughour is the next and near Aleppo.

The Rebels are experiencing internal issues, some of them are appalled at the surender terms and will simply ignore it.

Divide and conquer.
HTS no longer has much support here.
So SAA will compress Daraa from the south, and then an agreement.