MiG-31 fighter jets armed with Kinzhal nuclear-capable air-launched hypersonic missiles have conducted over 380 patrols over the Black Sea and the Caspian Sea, Russian Defense Minister said in a statement on February 20.

According to the Russian military, a flying squadron armed with Kinzhal missiles has been stationed in the Southern Military District since December 1, 2017. MiG-31s armed with these missiles have been carrying out patrols since April 2018.

In 2018, MiG-31s conducted practical launches of Kinzhal missiles at target grounds in various conditions, from the range of over 1,000km. All targets were hit.

In 2018, MiG-31 armed with Kinzhal missiles also participated in a joint drill with Tu22M3 bombers. The drills were designed to practice actions against sea and ground targets.

Shoigu added that the infrastructure for the deployment of the Avangard hypersonic glide vehicle system is being created in the region of Orenburg. In December 2019, the missile regiment armed with the Avangard will be placed on combat duty there.

Interesting location. The russians cover the side facing iran and syria and all in between where they place their missiles not european side that means everything there is already covered and sealed.

yeah well, it also covers Black Sea and possible approaches of carriers just in case the US decides to exit the treaty that forbids entry to the Bosphorous for large ships.

USS Donald Cook – 1 hour and 24 minutes into this video, shows what happened when he met Bastion, on route to Crimea.

Give us a break with 2 hours and half of a documentary about everything, tell the story about Bastion and Cook and why was Cook going to Crimea

Cook was going to Crimea, leading a NATO fleet, to kick Russia out of their warm water base. The section on USS Donald Cook, in the brillinat video was around 1 hour and 24 minutes, which I pointed out,l if you did not wish to view the whole of the video.

Does this article answer your question?

“On February 13, 2014, when tires and Berkut troops were burning on Maidan, a U.S. Navy squadron led by an aircraft carrier “George Bush”, carrying 90 aircraft and helicopters on board, escorted by 16 warships and three nuclear submarines left Norfolk for the Aegean sea. Ten days later, when President Yanukovych was deposed of power in Kiev, the squadron went through the Bosphorus into the Black sea.”

Thank you for the good laugh, kind of sad for some Russian people are so naive they can believe an American aircraft carrier sailed in Black Sea, going to attack Sevastopol but if this bullshit keeps you for being hungry good for you.

ROFL laughing with your reply.

Remember the Crimea War and who was behind it all, including funding?

Now who has been behind trying to evict Russia from Crimea, in order to have control over the ‘Black Sea’ from Crimea to Constantinople? Now how would that work out. with regards shutting off access to Russia, from access to the Med?

Ok so you believe an US aircraft carrier sailed on the Black Sea and it was ready to attack or enter in Sevastopol. Yay or nay?

USS Donald Cook is a destroyer and yep, the idiots thought it would be easy to take control of Sevestapol.

The USS Theodore Roosevelt, is the aircraft carrier, which met the Russian submarine, just off the Russian base, in Khaliningrad, over in the Baltic Sea.

So, days later, I am still ROFL laughing, when you do not know the difference between an aircraft carrier and destroyer, or what happened back in the Black Sea, April 2014. Which was highly amusing in itself. 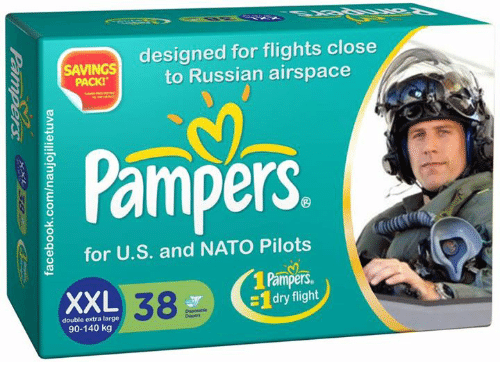 you can’t even read

“On February 13, 2014, when tires and Berkut troops were burning on Maidan, a U.S. Navy squadron led by an aircraft carrier “George Bush”, carrying 90 aircraft and helicopters on board, escorted by 16 warships and three nuclear submarines left Norfolk for the Aegean sea. Ten days later, when President Yanukovych was deposed of power in Kiev, the squadron went through the Bosphorus into the Black sea.”

I deleted it, owing to the fact I did not memorise the 2 hour plus documentary and you put no time link to your claim. I did not have the time to go back and watch the whole video, which I have viewed and seriously enjoyed. I placed the time link 1 hour and 24 minutes, which showed what happened to the USS Donald Cook. The aircraft carrier might have led the fleet, when they stuck their noses into the problems in Ukraine, caused by the So ros funded, regime change script, with the aircraft carrier docked outside the Black Sea, with the smaller ships given access to the Black Sea. Now why were NATO conducting yet more exercises on Russia’s borders, when Russia were enjoying the winter olympics. I seriously doubt that you bothered to watch the whole video.

You pasted me that link dude, you didn’t have time to read a 2 mins article and you had 2 hours and half to spend on a “documentary”. I said ok let’s give it a go, let you comment on the article you sent me first then move on the longer part, it looks like you are in love with your “documentary”, you don’t even care about the article you gave me to read.

USS Donald Cook – April 2014. Keep laughing, 1 hour and 24 minutes into this video. What happened when they met ‘Bastion’, just before the Russian military jets, popping down to say hello?

Jesus
Reply to  AM Hants

Thanks for the documentary.

So love it, together with sharing it.

“approaches of carriers”?!
Are you talking about aircraft carriers?!?
Why on Earth would they do such stupid thing?!
Air carrier in the Black sea would be like duck in barrel.

In the shallow Black Sea even NATO destroyers are in grave danger (when they show the flag there) from many Russian Kilo subs, Black sea fleet and Russian naval aviation from Crimea ( Bastion coastal anti-ship batteries not even to mention Kh-32 ant-ship cruise missile! )

“Why on Earth would they do such stupid thing”

Because they let jews tell them what is right and what is wrong in this world, so they might be thinking it’s right to commit suicide.

There is NOTHING for “Kizhal” to sink or target in “Caspian Sea” or surroundings!
In “Caspian Sea” it never was and it never will be anything big enough to sink!!
The biggest there are the Russian ships and even them are too small for “Kizhal”(if they ever decide to sink their own ships) !

So “patrols” are only “stand by” for East Mediterranean sea on very short notice!
Again “patrols” over “Caspian Sea” only serve to attack NATO ships in Mediterranean sea if need be (with Iranian agreement to fly over Iran and hit the NATO aggressor ships from Syria)

“Kizhal” range is 2000 km + Tu22M3 bombers range is 4000 km average without refueling (and they can refuel if need be).
So those ships (including air carrier) can be sink from very far away!
That way they avoid problem to ask flying over ANY NATO country (Turkey, Greece, Bulgaria not even mentioning nonsense of firing missile over Turkey to sink NATO ships!! )!

AM Hants
Reply to  jako

From Black Sea( over Crimea and under cover of S-400).. they can hit Ramstein air base in Germany…from Caspian sea( near Iran coast) they can Hit US base in Qatar and Jordan..

Why would they target Ramstein-Germany from Black Sea when it is closer from (Kaliningrad) Baltic sea?
In case of NATO attack on Russia …Naval bases in Middle East are not primary targets.(they can hit them with Kalibre missiles from Caspian sea anyways so I doubt that they would waste Kinzhal’s for that)
I think that primary targets are above all ABM system in Romania, Poland,ABM radar in Czech Republic (Turkey?) and all major NATO airports and military, naval bases in Europe + air carriers in Mediterranean and Northern sea
And for destroyers, frigates in Black sea they would use KH-32 which is more than enough.

Of course..but I have only written an example of the capabilities…for example MIg 31 flying over Chukotka can hit Alaska ( Anchorage and ABM, Radar system in all Alaska and parts of Canadá..in less than 10 minutes..

I wonder whether these missiles ( KINZHAL) can target moving targets at all, like ships. My understanding (and I could be wrong) is that is airborne derivative of Iskander missiles which is employed exclusively against static targets. If that is the case, then Kinzhal is not the answer for ships that can be miles aways from the moment the missile is fired. Until confirmed otherwise, I think Russia primary air borne anti ship missiles is still the recently commissioned (2016) Kh-32 with a max range of 1,000km, with Kinzahl to be used to destroy enemy radars, anti aircraft batteries, fuel and ammunition depots etc.

Wrong.
“Kinzhal” official main purpose is to be “anti-ship” missile.
That’s how it was presented from the start by Russian’s!
As for Iskander … that was only guessing from some Western annalists that “Kinzhal” is air-born Iskander (judged by the shape and evading characteristics of the missile) with no proves.

Recently Russians have announced that “Kinzhal” can target fix targets as well.
So being (nuke tipped also) it can be considered as (air-born) tactical nuclear weapon as well (just like Iskander with MUCH bigger range)

Wikipedi calls it “Russian nuclear-capable air-launched ballistic missile” which is DEAD WRONG because to call some missile “ballistic missile” it takes CHARACTERISTIC BALLISTIC TRAJECTORY that missile must perform from its name comes.
Kinzhal does not have such trajectory! (see pic. below)
https://en.wikipedia.org/wiki/Projectile_motion#/media/File:Mplwp_ballistic_trajectories_velocities.svg

Let us remember that Russia sank a Georgian war ship in motion during their conflict some time ago. What I do not know is whether or not Russia used Kinzhal. So, Russia has full capability to destroy any war ship with any type of motion.