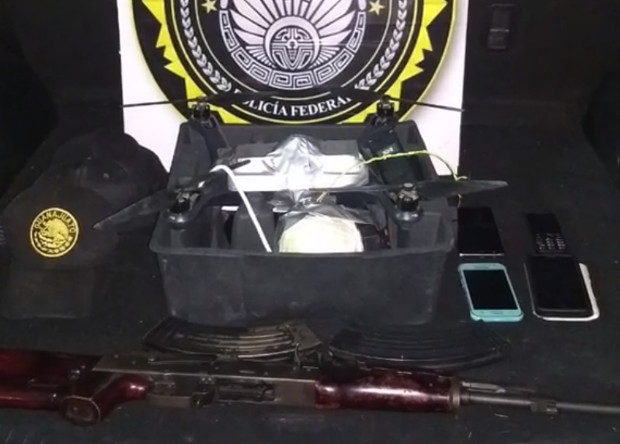 Mexican federal police found a drone armed with an improvised explosive device, while detaining four cartel members on October 20. The arrest took place in Valtierrilla, Guanajuato in Central Mexico. The 3DR Solo commercial hobbyist drone with an explosive device taped to it was found in the stolen car the men had been driving. An AK-47 assault rifle was also found in the car.

The use of drones by Mexican cartels is nothing new. Mexican officials have said since at least 2010 that traffickers are making use of drones for smuggling purposes. In January 2015, a drone loaded with meth crashed in Tijuana. In August this year, border-patrol agents in San Diego stopped their first confirmed case of smuggling by drone, yet this is the first registered case of cartels using drones as weapons.

The attached improvised bomb was what is known locally as a papabomba, or “potato bomb.” Papabombas, which first showed up in Colombia, are tightly packed spherical bombs composed of potassium chlorate, sulfur, and aluminum, with nuts and bolts added to create improvised shrapnel.

Commercial hobbyist drones become more readily available across the world, which makes them a versatile tool for terrorist and criminal activities. The 3DR Solo drone costs about $200-250. It can stay in the air for 20 minutes and carry items weighing half a pound. Its top speed is 55 mph, and its flying distance is about half a mile.

Back in January of this year, ISIS were reported to use weaponized drones as bomb carriers. Consumer camera drones were modified to release grenades.

Does this mean that Trumps Wall will also require anti aircraft capabilities as well ? :) This is all perfect Karma for the US that has used drugs and their profits to engage in regime change operations.

is a war that nobody wants to, it’s just an imposition against the people, the mexican goverments never represent us,just the gringos’ interests

You know. Democracy depends on people. Some people can’t have democracy. Otherwise, they will start killing each others and use drones to transport drugs.

it’s not about democracy, this f*ck*ng conflict is to destroy certains regions which have resources (Tamaulipas has a reserve of gas shale)

Why are you against the wall ? Being isolated from USA is the best thing that can happen. If I was mexican I will build the wall but also stop travels between USA and Mexico.

Just like Trump ban Syrians, Iraqis, Iranians and Yemenis. My question is why these countries don’t ban Americans.

So, I think there is no colonized people but only colonisable people.