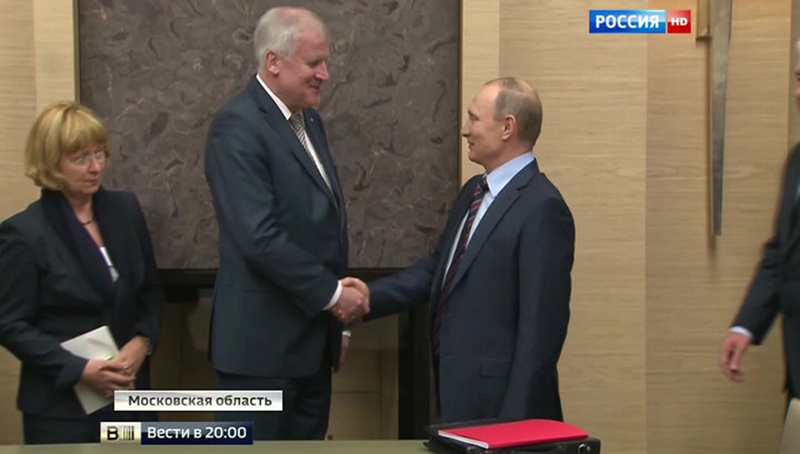 Original by Pavel Zarubin published by vesti.ru; translated by J.Hawk

International relations and Syria were among the many issues discussed at a meeting between Vladimir Putin and one of Germany’s leading politicians. Bavaria’s Prime Minister Horst Seehofer, the chairman of Bavaria’s Christian Social Union party. They discussed Russian relations with Bavaria in particular and with Germany in general. The two politicians want to maintain them in this difficult period.

This meeting has already become a major news event for German and other European media. Already on the eve of the visit the trip was being discussed by all the TV channels, newspapers, and Germany’s political elites. They demanded the visit be cancelled, others called it an outrage. Russian president’s press secretary implored not to view it as a sign of some kind of a conspiracy.

“I’m glad that it was said: we are not coming as conspirators. None of my previous visits to other countries were preceded by so much falsehood and disinformation. For us, the most important thing is to expand our relations within this globalized world. Bavaria, with a population of 13 million, naturally feels every day what happens in the world, be it in Syria, Ukraine, the refugee flows, criminality. And we are confident that all of these issues can be resolved through cooperation, not conflict. And we do not want to accomplish that in spite of but together with our federal German government, and not against Russia but, to the extent it’s possible, together with Russia,” Horst Seehofer explained.

“Yesterday we had a phone conversation with the chancellor. My understanding was that she supports relations between Russia’s regions and the Federal Republic of Germany. As far as rumors are concerned, they are unavoidable. But we all bear tremendous responsibility for preserving jobs, for continuing our cultural ties, and therefore we know of your desire to do everything in the name of normalizing the relations between Russia and Europe, Russia and Germany, for which we are thankful. All of us are influenced by current poroblems,” Russia’s President Vladimir Putin emphasized.

Horst Seehofer is one of the harshest critics of Angela Merkel over Europe’s migration crisis. Bavaria is the largest, most important, federal land in Germany, and the flood of refugees into Bavaria was such that in mid-January 2016 Seehofer sent Merkel an ultimatum containing a demand to resolve the migration crisis, otherwise the Bavarian government will turn to Germany’s Federation Constitutional Court. Bavarian politicians even did things which until recently were simply unthinkable: they sent a bus of migrants directly to Merkel’s office.

Given the charged nature of the German internal political arena, many interpreted Seehofer’s trip to Moscow as some sort of a challenge to Merkel. However, Seehofer did not deviate from his plans, saying that Europe’s problems cannot be solved without Russia, that Bavaria has suffered greatly from sanctions now that its exports to Russia have collapsed. Even though Bavaria historically has maintained close ties to Russia’s regions.

“We have a special relationship with Bavaria: 1600 businesses with Bavarian participation. Electronics, machine-building, construction. What’s not there! 50% of Germany’s investments in Russia come from Bavaria. For that reason you are a special guest,” Putin told Seehofer.

“Bavaria and Russia, Bavaria and Moscow indeed maintain a special relationship. This relationship includes such legendary meetings as the one which took place at the Gasthof,” Seehofer reminded Putin. “Unforgettable impressions. If I remember correctly, you wanted to spend an hour and stayed until midnight.”

“It was simply impossible for me to leave,” Putin laughs.

The meeting took place with the participation of Bavaria’s former Prime Minister Steuber who was in office in 2006, during Putin’s visit there. It was a visit which was described by many as  having “an informal and very warm atmosphere.” It’s this atmosphere that Germany’s largest land wants to preserve in its relations with Russia.

Before sanctions, Bavaria’s trade turnover reached an unheard-of sum of 11 billion per year. It’s more than the trade volume with many countries, which is why Bavaria views the anti-Russian sanctions as a theater of the absurd, something extremely harmful to Bavaria’s agriculture and government. Seehofer will also meet with Russian governors and ministers.

You can’t be considered an elite while you are being rodgered by another nations elites. The Germans will learn this at some point in the future.