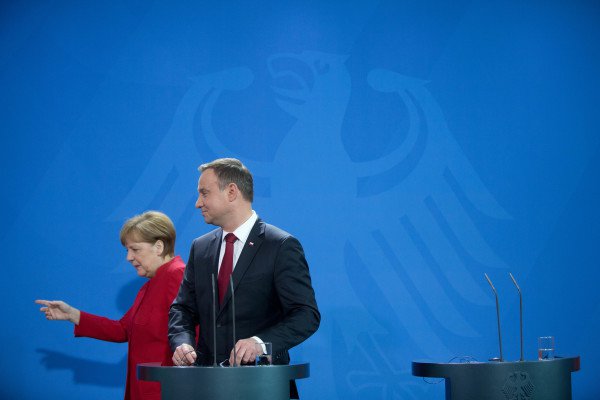 Chancellor Merkel has confirmed the predetermined decision from the G7 summit, that there is no reason for an end of the Russian sanction. In the other EU countries is very little resistance about the sanctions. Only Italy is not to give in, it wants to solve the problem but obviously bilaterally with Russia.

Angela Merkel sees no reason for the abolition of EU sanctions against Russia. Government spokesman Steffen Seibert pointed this out on Monday in Berlin. The G7 countries have recently once again emphasized that the sanctions are made in close connection with “Russian intervention in the Eastern Ukraine,” Seibert said, according to Reuters. “The lifting of sanctions is linked to the elimination of these causes. At the moment there is no reason to talk about a cancellation, “said Seibert. Currently intensive efforts of the German Federal Government and the French Government are taking place in order to move ahead in the faltering process of reconciliation in eastern Ukraine, said a Foreign Office spokesman.

In the Eastern Ukraine pro-Russian separatists still control large areas. Both Ukraine and Russia should be encouraged to provide for a permanent ceasefire and the promised local elections from the Minsk Agreement. On the margins of the EU foreign ministers meeting in Luxembourg, it was stated that the EU might extend the EU economic sanctions against Russia, which would otherwise expire by the end of July.

The EU countries have more or less resigned to their fate: It is generally expected that the extension will be for the most part waved through like six months ago. Also Italy’s resistance stays within limits compare to the previous sanction extension. It is assumed that the Italians will try to negotiate special conditions with Russia. Italian Prime Minister Renzi had met with Russian President Vladimir Putin at the economic forum in St. Petersburg. The Eastern European countries try to compensate for the economic losses by an increased NATO presence. For this reason Russia is referred to as a military threat to Eastern Europe. New NATO activities will bring additional income to the States. In this respect Poland is leading, which also has Donald Tusk as the European Council President.

Sanctions hurt the economy in the EU states hard and weaken the Europeans in the looming recessionary phase of the global economy.

Is Merkel relative to Hillary Clinton? Is Merkel showing signs of Alzheimer? Is she being blackmailed by things the NSA found out about her and in that way controlled by the US/NATO maffia?

And yet, international help keeps coming to Donbass. She will be reporting for dninews in Donetsk. Report by Katya Katina for news-front, (video is in english).

Stalin hated “Nation States” and loved globalized-socialism. Stalin would be so proud of Merkels EU. Stalin would object to everything Russia is today. Where Christians can have a say, and Russia has a national identity again.