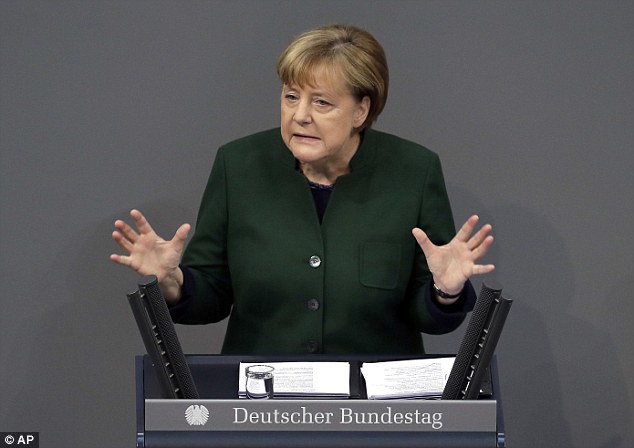 Originally appeared at Your News Wire

German Chancellor Angela Merkel has declared war on alternative media outlets that she says are responsible for subverting the government’s control over the public.

Merkel joined the chorus of other world leaders and huge multi-national media outlets who wish to rid the internet of alternative media websites, under the guise of “fighting fake news“.

Speaking in parliament, Merkel claimed that public opinion was being swayed away from establishment politics, claiming that independent news outlets posed a danger to national security.

“Something has changed — as globalisation has marched on, (political) debate is taking place in a completely new media environment. Opinions aren’t formed the way they were 25 years ago,” she said.

“Today we have fake sites, bots, trolls — things that regenerate themselves, reinforcing opinions with certain algorithms and we have to learn to deal with them.”

Merkel, 62, said the challenge for democrats was to “reach and inspire people — we must confront this phenomenon and if necessary, regulate it.”

She said she supported initiatives by her right-left coalition government to crack down on “hate speech” on social media in the face of what she said were “concerns about the stability of our familiar order”.

“Populism and political extremes are growing in Western democracies,” she warned.

Last week, Google and Facebook moved to cut off ad revenue to bogus news sites after a US election campaign in which the global misinformation industry may have influenced the outcome of the vote.

But media watchers say more is needed to stamp out a powerful phenomenon seen by some experts as a threat to democracy itself.

Merkel’s conservative Christian Democrats are the odds-on favourites to win the German national election, expected in September or October 2017.

But she is facing a strong challenge from a resurgent rightwing populist party, Alternative for Germany (AfD), which has her liberal refugee and migration policy in its crosshairs.

It is currently polling at around 12-13 percent which could complicate the complex maths of coalition building after the poll.

All of Germany’s mainstream parties have for now ruled out forming an alliance with the AfD.

It has always been an illusion that in the west there is freedom of expression. This is something that at least to me is clear, and has been throughout my nearly seven decades of life. From the earliest it was obvious that people could say anything they wanted provided it was completely ineffectual. So freedom of expression was a sort of theatre. Its only function was as a sort of virtue signaling that enabled the powers that be to claim a smug self congratulatory tolerance.

But let free expression have any effect at all and there is a very different reaction. Suddenly we don’t have free speech but instead hate speech and dangerous news.

Democratic leaders have always been as squalid as any other and now we will see just how true this statement is.

Mer·Kel 1. A German politician soon to be ex Chancellor of Germany for her slavish implementation of unwise EU policy lies. 2. A U.S. neocon parrot.

Merkel doesnt understand that by censoring she reveals the globalist order and makes “fake news” (alternative news) more interesting.It doesnt work this way in Europe.Its the internet age.Shutting it down isnt possible.

“for subverting the government’s control over the public” The purpose of goverment is to serve the people by providing transparent goverment not by subverting it.

Who is she to tell what is the truth ? Mertkel is a dictator.

Why doesn’t she get on her broom and join Cher on Jupiter.

dangerous times. have they said what these sites are? identified fake news? really? I havnt seen anything, but clearly ‘Google and Facebook moved to cut off ad revenue to bogus news sites’ already. what ones? What fake news. More like the rise of a new world order political police managed by google whilst pretending to be a philanthropic enterprise. The ghestapoho and its ilk was made illegal, so the stasi was a department within the police, same difference. Now that department is outsourced to their pals google and facebook, corporate gaurdians of psyops and control of all information. Its clear that the new world order has an agenda that people dont want. If the governments provided a world thatpeople wanted to live in there would be no need for dissent.

What is fake news? Some site need to take care of that shit and some are trying like this