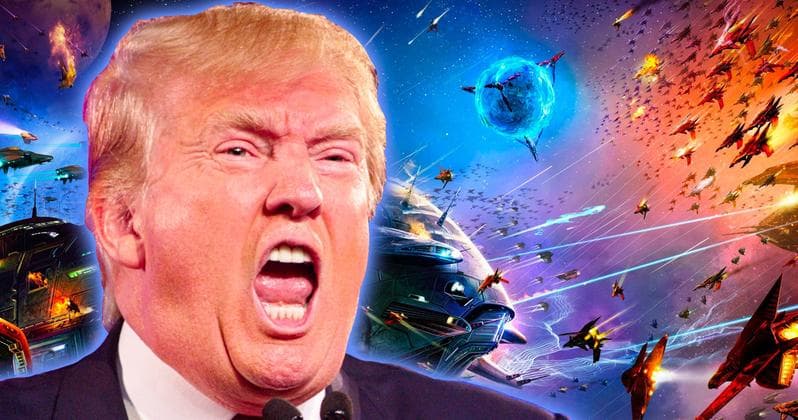 In a revelation that should have happened on April 1st, but actually happened in December, the United States space force revealed the name with which its recruits are to be referred as: Guardians.

The opportunity to name a force is a momentous responsibility. Guardians is a name with a long history in space operations, tracing back to the original command motto of Air Force Space Command in 1983, “Guardians of the High Frontier.”

Of course, this was announced and Twitter and it received some positively funny feedback.

this is so embarassing

Many recalled that the logo of the US Space Force is directly stolen from Star Trek, and that CBS/Viacom have, apparently, decided not to sue for copyright infringement.

Now, the new branch of the US Military appears to be testing its luck with Disney possibly suing it for using the name “Guardians” – as in “Guardians of the Galaxy” Marvel comics and Disney films.

So if CBS/Viacom doesn't sue you for the stolen logo, Disney will for the Guardians name. Brilliant.

It also, apparently, took an entire year’s worth of thinking to come up with a name that’s directly taken from a movie that came 6 years ago, back in 2014.

Guardians of the Galaxy features Chris Pratt in the role of “Starlord” whose humorous adventures and misadventures lead him to saving some parts of the galaxy, but not really the entire galaxy. This is also humorous, since the US Space Force hasn’t had any adventures yet, and it is questionable if it will anytime soon. Especially if incoming President Joe Biden cancels the entire thing.

There were also questions as to what part exactly the “heritage and culture” part played, in the statement.

There were also suggestions to change the logo, it could also get sued for copyright infringement, however.

When you frame it as "heritage and culture," it makes me think you meant your insignia to look like this. pic.twitter.com/ugutE9NZnq

It is questionable, since the US said freedom of expression even for Nazis is important, so maybe not, in a sign of mutual respect, the KKK might allow them to use it.

On a more serious note, if at all possible, US Vice President Mike Pence announced the name.

“Henceforth, the men and women of the United States Space Force will be known as Guardians,” U.S. Vice President Mike Pence announced today during a ceremony marking the branch’s impending first anniversary.

“Soldiers, Sailors, Airmen, Marines and Guardians will be defending our nation for generations to come,” Pence added, also invoking the terms that refer to people who serve in the U.S. Army, Navy, Air Force and Marine Corps. (Service members in the nation’s other military branch, the Coast Guard, are called “Coast Guardsmen.”)

The Space Force is officially part of the Air Force, just as the Marine Corps is part of the Department of the Navy.

Hopkins was selected in June 2009 as a member of the NASA Astronaut Group 20. He made his first spaceflight as a Flight Engineer on Soyuz TMA-10M/Expedition 37/Expedition 38, from September 2013 until March 2014.

Yes, the US Space Force’s first astronaut went to space with a Russian launch vehicle. So far, the farthest US Space Force has been from US soil is to Qatar.

The Space Force “organizes, trains, and equips space forces in order to protect U.S. and allied interests in space and to provide space capabilities to the joint force,” the new branch’s mission statement reads.

With the Trump administration on its way out, the future of the space force seems uncertain. The Associated Press put it delicately. It is possible that quite a few US taxpayer’s dollars were spent on a force that has no weapons, hasn’t been to space, and came up with a rip-off name. President-elect Joe Biden has yet to reveal his plans for the space force in the next administration.

Regardless, this is one of the more positive news in 2020, since it’s simply more funny than sad.

So it will be Qatar to bring the first camel into space, with the generous help of the Guardians of the Galaxy, it seems that in the US they have closed all the asylums and poured the madmen into Washington DC.

The name of their first ship will be thunderbird.

That show eons ago was correct. As all the staff are puppets!

You know what’s even funnier? The title of each and every IRGC members is “Guardian”.

And they accuse China of IP theft!

Some time ago Russia and China made a proposal of an international binding treaty to ban + outlaw any militarization of Space [Earths Orbit + Moon…so far]…You Can Guess…The AmeriCunts indignantly rejected the proposal. And now this proof of the ‘AmeriCunt Exceptionalism‘ Braindamages Lunacy + Delusions of Grandeur ~ They are definately a danger to the Galaxy.