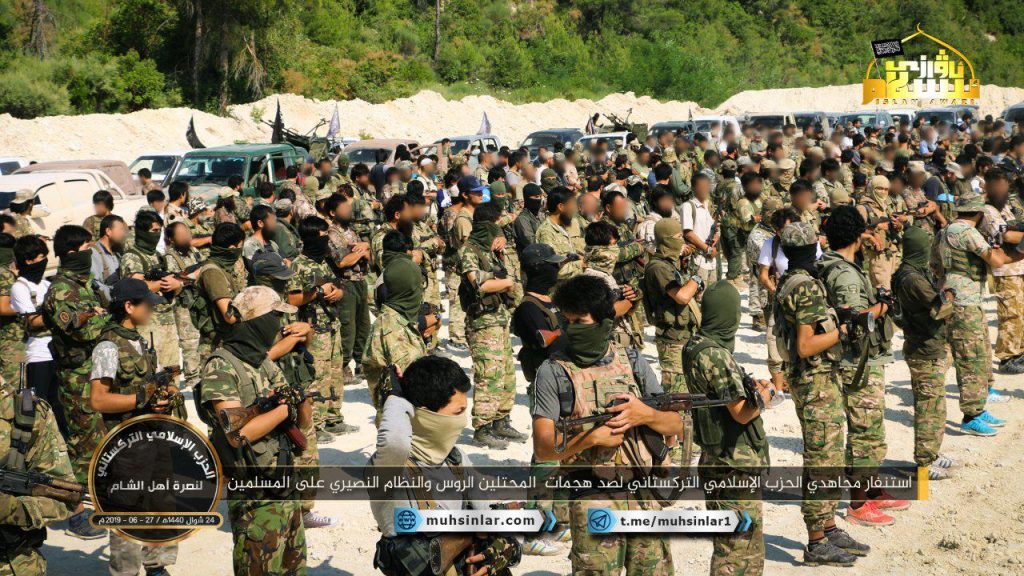 Hostilities in Idlib have resumed, and it is unclear when exactly their end would come. On August 20, the Syrian Arab Army, with support from Russia, liberated the largest urban center in southern Idlib – Khan Shaykhun. Soon, multiple mainstream media will unite their voice blaiming and shaming the ‘bloody Assad regime’ and ‘covard Russia’ for opressing ‘moderate opposition’ in the region.

Let’s take a look at these ‘moderates’ withdrawing from Khan Shaykhun and its countryise.

As an example, a “local activist” – Ahmed Husseinat, cited by Al Jazeera, said the fighters who withdrew were from Jaysh al-Izza and Turkish-backed al-Jabha al-Wataniya lil-Tahrir (the National Liberation Front, NLF) – a loose coalition of armed groups considered part of the moderate opposition.

Both of these “moderate opposition” groups are allied to Hayat Tahrir al-Sham (HTS), which is without a doubt the biggest militant presence in Idlib currently and a terrorist group. HTS was formerly the local branch of al-Qaeda, but have, of course, “changed their ways” and are now ‘moderate’. The group said that there was no withdrawal, but rather a redeployment.

MSM claims that other “moderate groups” are also present in Idlib, they operate and carry out quite a few “humanitarian operations.” 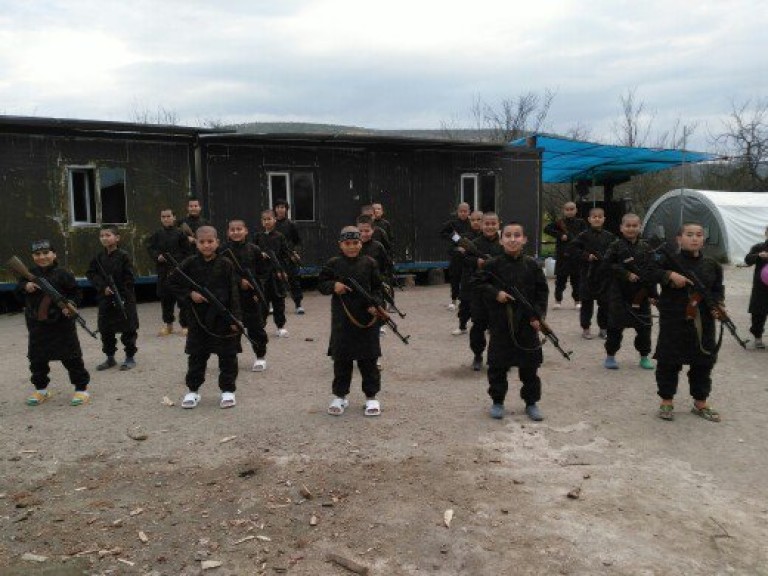 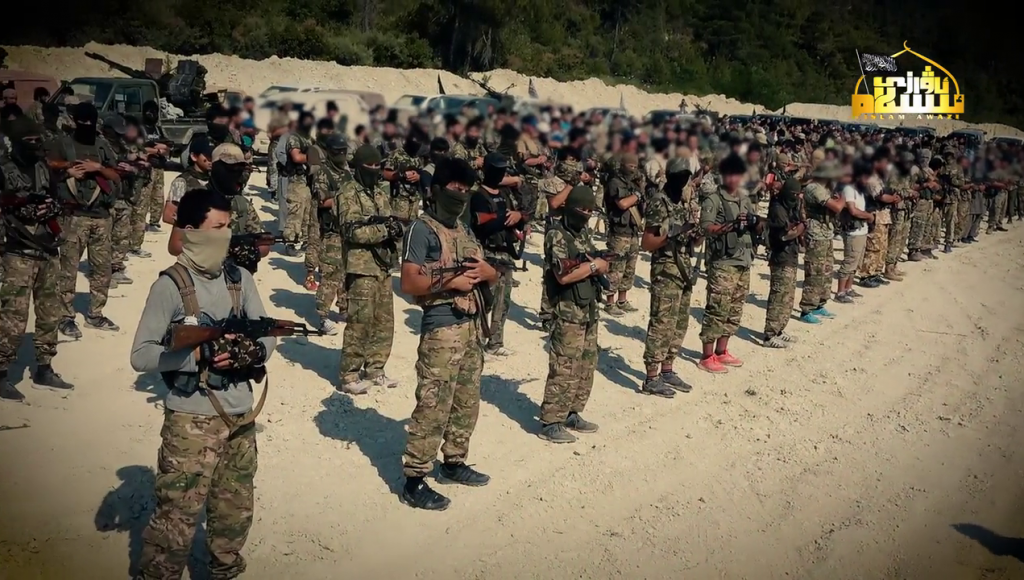 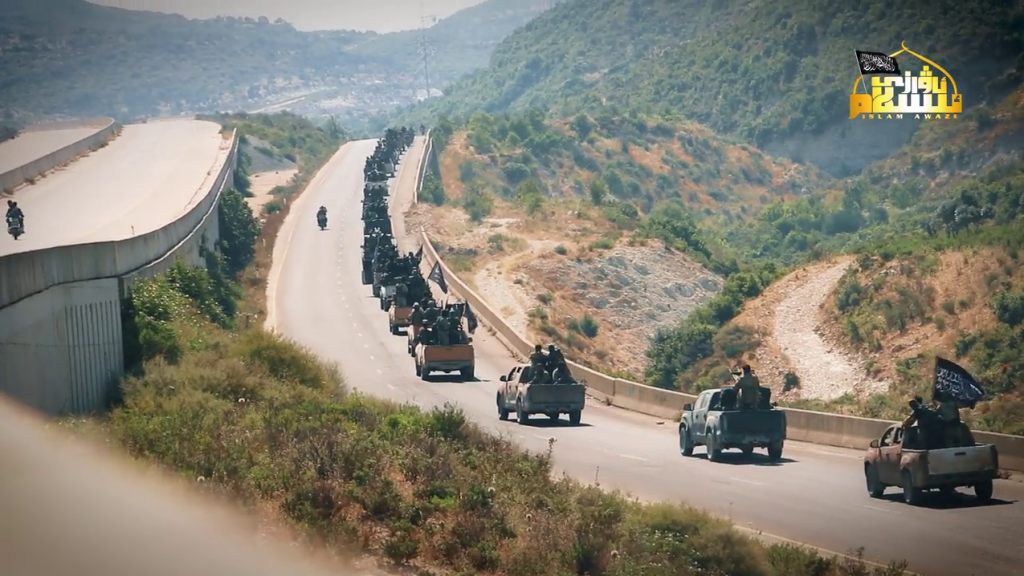 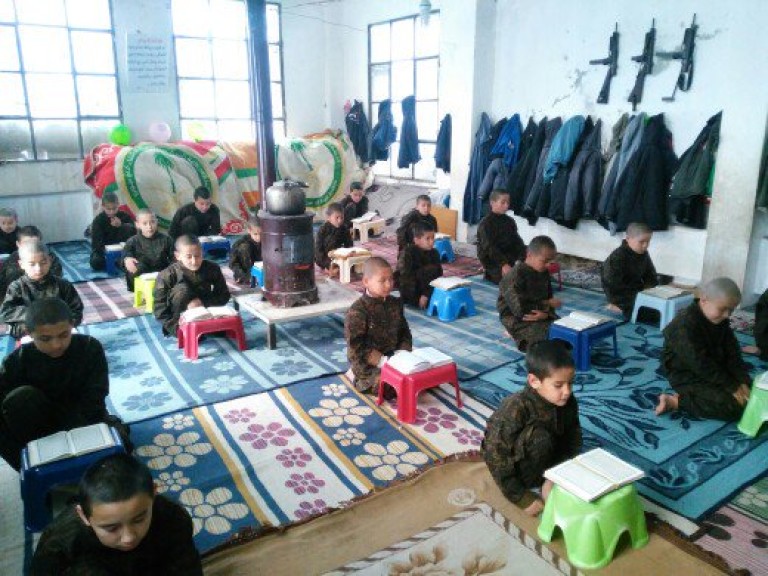 One such “moderate group” is the Turkistan Islamic Party (TIP), which “educates children.” Mostly in jihadism.

The TIP is an Islamic extremist organization founded by Uyghur jihadists in western China, considered broadly as a terrorist group. The group is allied to al-Qaeda.

Camps training children for Jihad are being run by the Turkistan Islamic Party in Syria. Uyghur child soldiers being instructed in Sharia and training with guns were depicted in numerous videos released by TIP.

The group advertised children jihadist training camps in Pakistan as early as 2013.

While the TIP has been active in Syria, the organization’s core leadership is based in Afghanistan and Pakistan and operates in those countries as well as in China. The TIP has also advertised camps for children in the Afghan-Pakistan region.

It has received relative Turkish support, and has been designated as a terrorist organization by Turkey since August 3rd, 2017.

The group gets very little mention in media, but has recently “upgraded” its media output, with a new official website and a Telegram channel.

In late June, the group published some photographs showing that it was preparing a large force for the upcoming battles in Idlib. The images were taken from the group’s Telegram channel, since the website appears to be frequently taken down (for unknown reasons, why would anybody ever target the website of a group that trains children jihadists?).

TIP primarily fights “Bashar al-Assad’s regime” and its allies, in Hama and Latakia.

In May, the TIP threatened Russia in another video that trumpeted the organization’s role in the global jihad. Some of its members wear red bandanas, signifying that they are part of the TIP’s elite special forces. Such well-trained guerrilla fighters belong to more than one group in northern Syria.

The group has operated the above-mentioned camps for children jihadists from as early as 2015 in Syria.

The first reports of the group’s training camp in Idlib came in July 2015.

In September 2016, the group released a video which showed small clips and photos from the Eid al Adha celebrations, combat footage from recent battles, and some of its killed fighters. Around halfway through the video, children are shown posing with AK-47 assault rifles, pistols, and attending Sharia classes. Many of the children are boys, but some girls are also seen with weapons in the video.

This was a small look in some of the “moderate rebel groups” that are operating in Idlib and that the “Assad regime” is oppressing, together with the “evil Russians.”

Following are photographs from the 2016 video: 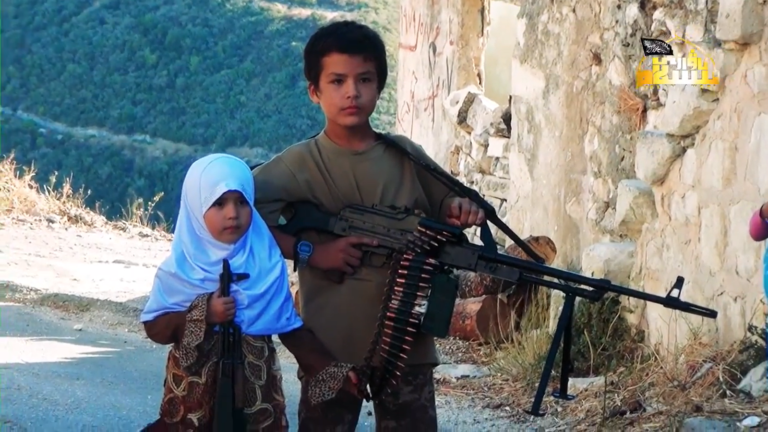 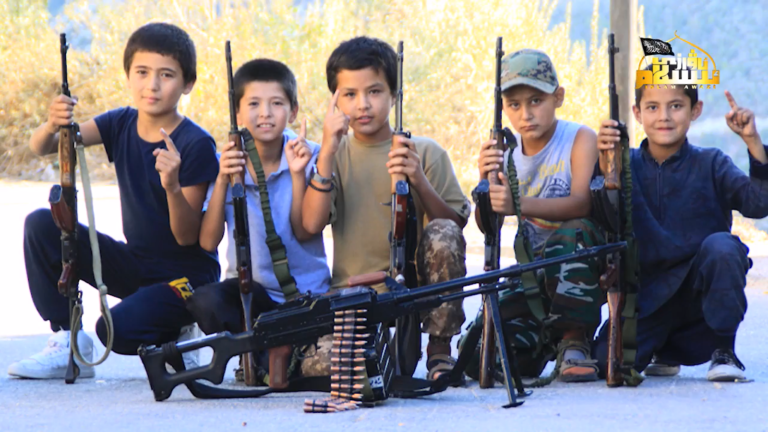 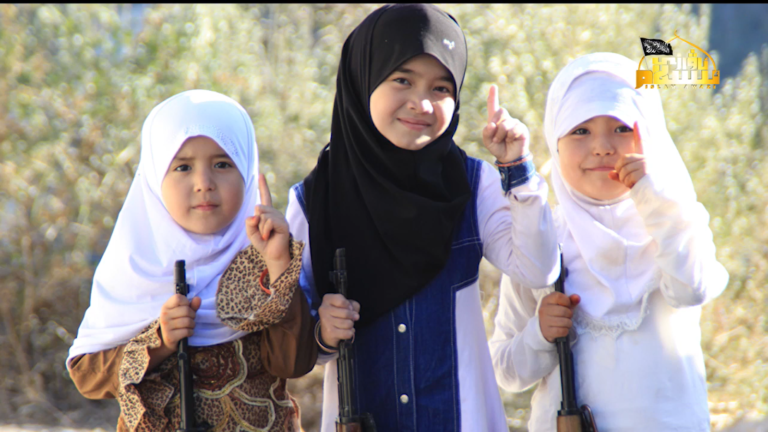 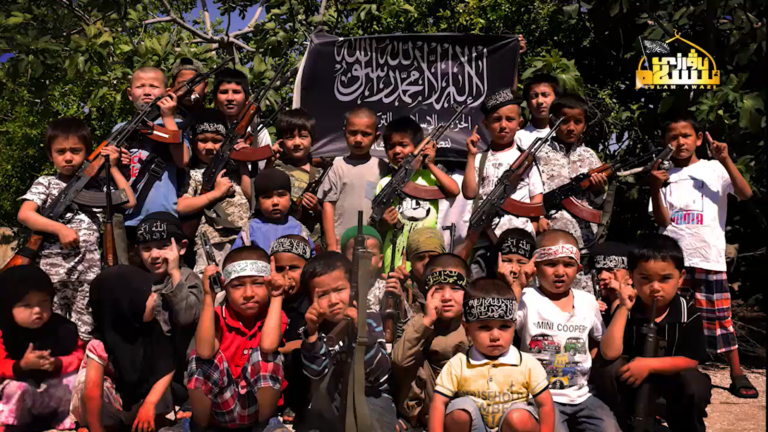 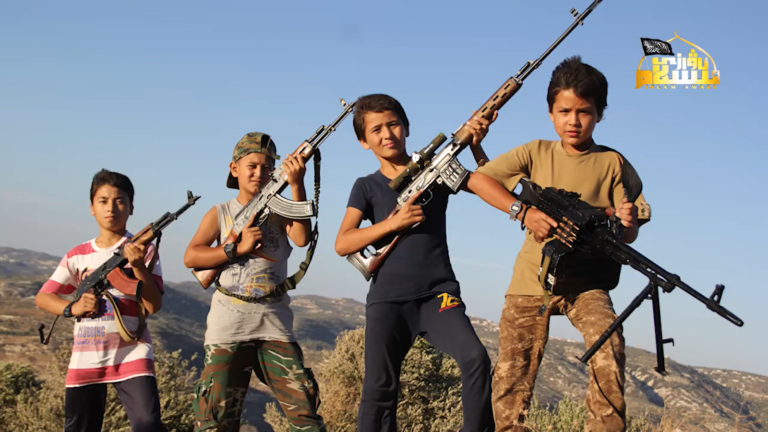 well, ive written before on this subject…and the solution nis very very simple

kill them all…..men , women and Children….and give them that what they Dream and pray for….

Lupus
Reply to  klove and light

Agree. This evil must be annihilated

I agree ,every man ,woman and child holding a gun is to be shot on sight. All children exposed to isis teachings are to be flown to Saud,Israel ,Turkey or America to be raised at their expense. They broke it ,they can fix it.

Don’t take these propaganda seriously… If adult rebel force cannot turn the course of war in their favour, then children certainly won’t be able to either…these videos and training camps are just for show by the rebel groups, to show their shareholders about future growth, but it’s just a big Ponzi scheme really

Sadly children are often very effective as child soldiers. They believe what they have been theached, they dont have the knowlegde and experience of adults to judge for themselves. They are idealistic, and therefore risk to fall victim to false ideals. Just look at the Hitlerjugend. While the older soldiers gave up, it was the child soldiers, that made suicide missions to defend Berlin. My Grandfather was one of them. And i believe him when he said, that children were the crulest of all. Its all about socialazation. We you grew up, with what ideals and values.

Just to emphazise that: My Grandfather killed himself at the age of 65. After all those years, the demons of the past haunted him, he never escaped them.

Very shocking! I am saddened to hear about your loss… Children must be protected.

Thanks. It just shows how deep indoctrination runs, and that those children later will stand next to no chance to free themselves from those demons.

Hmm, children cannot often think rationally and lacks the real world experiences to make strategic decisions, so as cannon fodder a child army might work but tactical advantages aside, what wins a war is strategic advancements over your opponent and such things are out of reach for children.

Truely right, an Army commanded by children will stand no chance. But with those children embedded into the command structure of such a Jihadists group, is a different thing sadly, like also the wars in Africa have proven.

To be clear: Not children of the age in elementary school (Jihadists though already used them in big numbers for “practicizing Jihadi sharia law” meaning for executions). But in the ages up from 12-16, children were used extentively in many wars, often being the most feared by their enemys for the fanatism. We may not be able to grasp this pehnomynom from our view, but the factors those children are exposed at, it its a different thing entirely.

In this age these kids should have pen and book. Wars are not solution of any problem. Those nations that trained their kids for ww3 will never survive for long.

They do have books though Rob. I case you did not notice? Is called Quran.

But in Quran there is no formula of Hydrogen bomb to deter thieves of Washington.

The Jihadi books are from US. The background story is here. https://pt.slideshare.net/2sadanand/afghan-schoolbook-nebraska

The British style, invade another country and brainwash all primary school children into violence against their own parents, neighbours and society.

That’s what is happening in Libtarded US schools now. White kids being taught to hate their parents etc.

This is so evil, man. This is 100% Wahhabi fingerprint in this.

how the vulnerable fall ! had they not been forced to these classes, their lives would have been 90% deferent