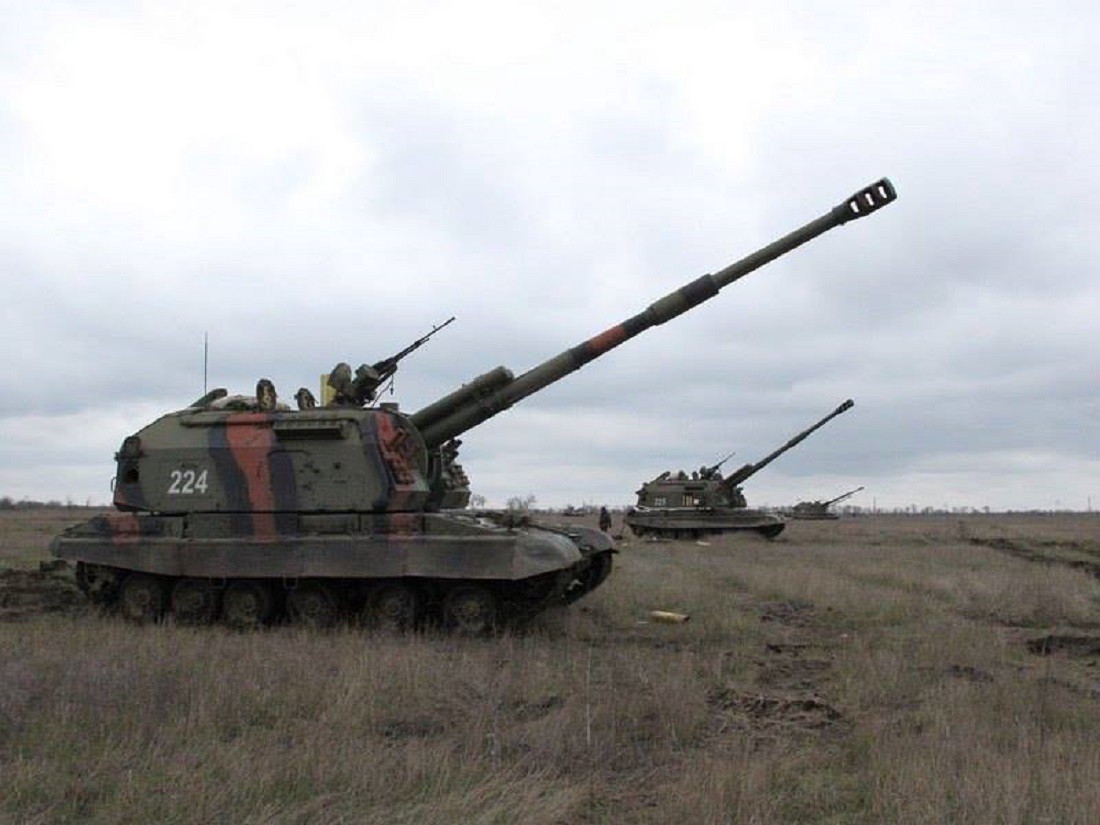 More than 700 artillery shots were fired by Ukrainian artillery on Donetsk rebel positions in Donetsk Saturday night, among the most intense bombardments of the war, according to Russian language news accounts.

According to a new release posted on the website of the Donetsk ministry of defense, Ukrainian artillery fired included 152mm and 122mm artillery, and 120mm and 82mm mortars, for a total of 750 shots. The intensity of the artillery firing from the Ukrainians has not been seen since before the autumn of 2015. The total number of shells that fell on rebel positions was almost ten times the number from the previous night, 80.

In the south near Mariupol, locations struck by Ukrainian artillery include Kominternovo and Sahanka.

A separate news release by the Donetsk ministry of defense said that 20 each 122mm artillery shells hit the Kuybyshevsky district of Doentsk city Saturday night.

The Ukrainian ministry of defense, as reported in lb.ua said that rebel artillery struck Ukrainian positions 70 times Friday night in the previous 24 hours.

Fighting on the ground in Donetsk

Donbas militants attempted several platoon level probes into Ukrainian positions at Marinka Thursday and Saturday nights, according to data supplied by the Ukrainian ministry of defense and reported in an lb.ua news report.

At 2100 hrs Thursday a rebel patrol armed with small arms and RPG rocket launchers probed into Ukrainian positions at Marinka, only to be driven back by Ukrainian counterfire. The Ukrainian side reported no casualties in the encounter. The report also said that rebel 82mm fire was reported at Marinka on Thursday evening.

At 1900 hrs on Saturday, two separate rebel patrols attempted to move into Ukrainian positions from two different directions. The rebel losses amounted to eight dead, but the Ukrainian ministry refused to account for their own losses at all, which likely mean there were some losses.

Probes by both sides at Marinka are starting to become routine, with several taking place in the past week, with high losses reported.

Ukrainian army units have fired mortars and small arms on Lugansk rebel positions, mainly focusing on the area around Kalinovo, according to data supplied by the Lugansk government information website.

It is unclear in those news releases just how much of the firing was done by mortars, but it is clear going by the most recent reports, rebel have to be worried about the location of the activity.

Kalinovo was one of the locations back in January, 2015, where rebel forces attempted to shut the lid on the Debaltsevo cauldron to little avail. That failure forced rebel commanders to adjust their plans to close off Debaltsevo, when the battle for Logvinova took place.

Logvinova was attacked earlier this month by a large Ukrainian combined arms force, attacks which struck a number of locations across a large front. The attack was much like others before and since, where Ukrainian forces attempt to move their armed units into “gray zones”, in order to initiate close quarters fighting, to force rebel forces back even further into their own defensive zones. To date only the first, at Yasinovataya, has been successful.

A separate Lugansk government news release recounted how Ukrainian units are using their firepower to fight one another in Lugansk.

Artillery units with the Ukrainian Interior Ministry troops Lugansk-1 battalion shelled positions of the Ukrainian 28th Separate Mechanized Brigade. The report claims that the shelling was intended to be reported as a rebel provocation.

They need to set up real international brigades to fight off the NATO/SAS/Ukraine aggression. They need to put out a call for 10,000 foreigners who oppose NATO to come join them, and bring the Zionist-government of Ukraine to it’s knee’s within a 6 week period. Then things can go to the negotiation table, and a lasting peace can be established that is honorable to all sides. And that keeps Zionist out of Ukrainian affairs for good. https://holodomorinfo.com/

If you feel impatient, let it be for this question: What is taking these Ukrainians so long to walk into the jaws of death?

“rebel” positions? That would imply that Donetsk and Lugansk are still part of Ukraine. I can’t read anything after that. LANGUAGE!!!!!!!!! DON’T USE THE LANGUAGE OF THE ENEMY.

I agree about the rebel label. Novorossiyan armed forces or something similar would be more appropriate. Really if there are rebels present it’s what known as the uaf. It’s they who support the government formed through an illegal coup backed by nato. I don’t think of the uaf as real rebels so much as I consider them nato bootlickers.