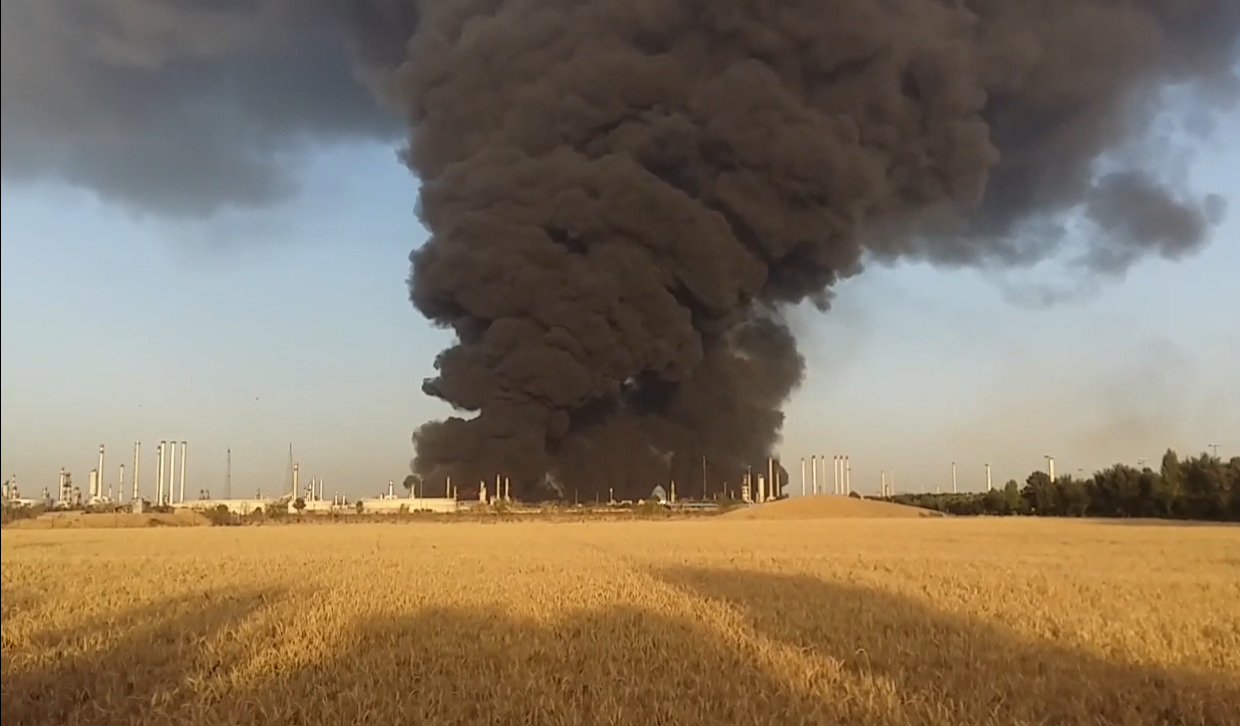 Screen grab from one of the fire videos (https://youtu.be/VTTw9v7EHE8)

On June 2, a massive fire broke out at the Tondguyan refinery which is located in the southern outskirts of the Iranian capital Tehran.

According to the Iranian media, ambulances and firefighters were quickly dispatched to the oil refinery, where all operations were ceased. So far, no casualties have been reported.

Mansour Darajati, head of Tehran’s crisis management organization, told state TV that a leak at a liquid gas pipeline at the facility had sparked the fire. Darajati added that an investigation into the fire would be launched.

Meanwhile, Shaker Khafaii, head of the Tehran Oil Refining Company, which runs the state-owned refinery, ruled out the possibility of sabotage.

Earlier today, the Iranian Navy largest vessel IRIS Kharg sank in the Gulf of Oman as a result of a mysterious fire. The details of the incident are yet to be revealed.

Over the last few months, a series of fires broke out in high-value facilities across Iran. In a number of cases, sabotage by the Israeli intelligence or other enemies of Iran was suspected. Nevertheless, Tehran has not made any official accusations yet.

The theater continues. Entertained yet ?

So you are admitting that the US is not good enough to handle the Russians or Chinese. How observant of you and well done on recognising -0it.

I presume your handle is short for Prostitute USA?

Your clown nation specialises in sucking on Jew cock and swallowing on command.

Well he is somebodies whore so well spotted.

I said it before and I say it again, Iran NEED to deal with MEK terrorists. They will never be safe if those fuking rats can work in very important sites in Iran. The nuclear site…guess what, it was a MEK terrorist that placed a bomb.

Don’t say shit like “ohhh it was Mossad, CIA, and MI6″…NO, MEK has been the main player in Iran for a long time. No Dual citizenship or anti-government dogs should be allowed anywhere near important sites in any country.

The Persians have been under constant attack In one way or another since 1979. How long they can keep resisting basically surrounded and infiltrated is anyone’s guess.

Urban Moving Systems?! Is that you, again?!

Israeli opposition led by Islamists heads agree to form gov’t, boot Netanyahu out. Yair Lapid told President Reuven Rivlin in an email: “I am honored to inform you that I have succeeded in forming a government.”

Potato Man
Reply to  Pisrael is a JOKE

It doesn’t matter who is the clown at the top just like in the US.

Hacker attacks US meat factory – gas lines just in few weeks, which cost the US more than all the things you mentioned LMFAO. Russia did I’m sure.

The ship was older than you, jet accidents happen 2-3 yankees die each year, “refinery goes up” welcome to M.E motherfuker.

Here is a story: “And still asking for more: US senator says Israel to request $1bn in additional aid”. PressTV: “Being already the largest recipient of assistance from Washington, with an annual $3.8bn in US military aid, does not stop Israel from asking for more. Now a US senator has unveiled that the Tel Aviv regime is preparing a request for an additional $1 billion to the Pentagon to replenish its missile system following the latest war on the besieged Gaza Strip.”

As we all know how poor these apes really are… the funny thing is someone said BiBi-isis asked for it to buy the other team.

If you thinks that all the fires wich is happening in Iran are not made by a foreign state you are to stupid to answer. Yes the fires are made by technology far beyond the capabilities of Iran or any country in Middle East apart from Israel. Western civilization have military technology that will blow you away. Next future wars will be won by countries with the most advanced technologies. It won’t be anymore soldiers on the ground. We will fight enemies from comfort of our living room.

Iran has the habit of ruling out sabotage even before any investigation takes place – only to confirm after weeks or months that it was indeed sabotage. From the pattern of past events, this is more likely to be sabotage than accident. Over 500 oil-trucks catching fire on the Iran-Afghan border, reprisal attacks by Iranian militias in Iraq, ship incidents at see, explosions at nuclear sites, largest naval ship sinking, and now a massive fire outbreak at Iran’s oil infrastructure. This is highly unlikely to be an accident. Saudi Arabia could be taking a part or at least supporting the Israelis as much as it could (as payback for September 2019). The biggest mistake Iran would make is support a Shiite militia in Afghanistan against the Taliban. I’m getting more and more convinced that Afghanistan would be used to overthrow the Iranian regime. It is Iran’s underbelly and the best place from which the Israelis can create a nationwide chaos in Iran without even needing America’s help. No wonder the U.S proceeded to withdraw from Afghanistan despite overwhelming objection in the MSM, Russia, China, and Iran. We must watch what happens in Afghanistan closely after the U.S completes its withdrawal. I read a few days ago that the council of Shiite scholars of Afghanistan say they are not against an Afghanistan ruled by Sharia. I interpret this as an attempt to reach out to the Taliban with assurances that they need not worry about a Shiite rebellion like in the past. If this is indeed the case, then there’s hope that Iran can survive this trap that’s being set for Iran in Afghanistan. Imagine missiles flying from Afghanistan into Iran. Missiles that Israel and Saudi Arabia will freely provide. Iran’s oil infrastructure could be destroyed in a matter of months. Its nuclear sites would be targeted and this may force the Iranian armed forces to invade Afghanistan to stop it. But we all know what the result would be – a nightmarish quagmire for the IRGC. Many Iranian soldiers would die as they lack the airpower America used to push back overwhelming Taliban attacks. They won’t be able to capture and hold even a tenth of Afghanistan from the Taliban. Yet, the missiles will keep flying into Iran.