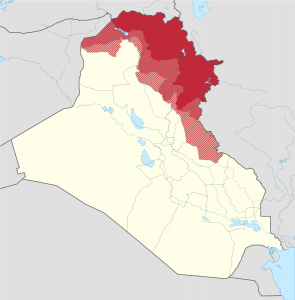 President of the Kurdish Autonomous Region of Iraq Masoud Barzani has just announced the region will hold a referendum on independence. Which might have be of fundamental importance for regional relations, the war in Syria, and the struggle against the jihadists.

This is a momentous event for the regional situation and changes the geopolitical situation in this unstable, war-torn region.

Barzani said that “the referendum is an inherent right of the Kurdish people to establish an independent state, and we will not ask anyone for permission.”

It also appears that the Kurds do not recognize the Sykes-Picot line, or the division of Kurdistan between Syria and Iraq. It implies that the referendum would also be held on the territory of northern Syria. He qualified his statements by adding that he referendum on independence would not necessarily mean an immediate declaration of independence.

This naturally raises the question of what will happen on the territories inhabited by Kurds in Turkey and Iran.

We have asked Dr. Wojciech Szewko, a specialist on Middle East affairs, concerning the declaration’s implications for regional and global politics, and the war against the Islamic State:

“This is a geopolitical shift, comparable to creating a Polish state separating Germany and Russia. It will either be quickly crushed militarily by adjacent states or lead to decades of continued warfare. Kurds also inhabit northern Syria (which they control), Iran, and more than 15 million live in Western Turkey. Proclaiming a Kurdish state could lead to a national uprising in Turkey. It could suddenly turn out that the Islamic State is no longer an important problem for Turkey [sic], Iran, or the government in Baghdad.”

Kurds are estimated to be one of the largest stateless nations at 30-40 million. They have been striving to establish an independent state of Kurdistan for centuries, against the resistance of all the countries which they inhabit in spite of promises they made in early 20th Century.

Kurdish Autonomous Region was initially formed in 1970 following an Iraqi-Kurdish agreement. In practice it was legal fiction until 1991. After the war of 2003 and establishing new Iraqi authorities, a new agreement was signed. Iraq’s 2005 Constitution permitted the existence of a Kurdish Regional Government with full internal authority and entitled to 20% of Iraq’s oil revenue. The Kurdish region recognized Iraq’s sovereignty but de-facto has been building an independent state, including establishing border crossings on its border with the rest of Iraq.

Following the jihadi proclamation of Islamic State in northern Iraq and southern Syria, the Kurds occupied the Kirkuk region which was abandoned by government forces, and which they have long claimed. Iraq’s government accused the Kurds of supporting jihadis and stopped transferring oil revenues., even though the Kurds for a long time were the only real force (in Iraq) fighting against IS. Barzani then declared his intention to hold an independence referendum, Kurds withdrew from the coalition government in Baghdad, and  president Jalal Talabani stopped discharging his duties. The possibility of holding a referendum is provided for in the agreement between the Kurds and Baghdad government.

Logic does sertainly not fail this decision, Sykes-Picot or any other colonial or post-colonial law bares no legitimacy over any people or individual.

Finally someone in the ME is thinking, BUT, knowing Barzani, those thoughts are not his.

The Kabbalists and Talmudists of Israel, US, UK and Turkey have been planning this and supporting Barzani for years…

Barzani can trash-talk Sykes Picot all he wants, he is still helping the former colonial powers (and a few others) redraw the map of the Middle East with no input from the people affected by the new configuration. Barzani is a stooge.

interesting, barzani is doing one of two things, 1) he’s been bought and paid for to promulgate the GREATER ISRAEL PLAN 2) he’s a pathetic moron which will still assist “unpaid” to help break up iraq which is what THE GREATER ISRAEL PLAN calls for..