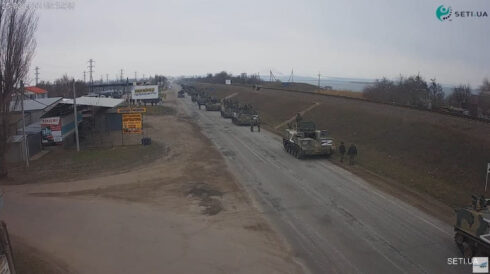 A joint military operation of the People’s Militias (PM) of the newly recognized republics and the Russian Armed Forces continues in the LDPR. Targeted strikes by the Russian Air Force destroyed facilities of the Ukrainian Armed Forces (UAF). A military unit near Nikolayevka in the Mariupol direction was also destroyed.

According to DPR head D. Pushylin, information emerged that the Ukrainian Security Service had planned to blow up two enterprises in Mariupol.

The Ukrainian MLRS in Mariupol:

The situation on 24 February was developing rapidly. The Azov division is still holding Mariupol.

Ukrainian servicemen are suffering casualties and are asking for humanitarian corridors to be opened for withdrawal. According to Eduard Baturin, the official representative of the DPR People’s Militia, the Command has fled.

DPR units and Russian troops also suffer losses. There are captives on both sides.

The Ukrainian army is preparing to defend Mariupol. AFU military set up firing positions inside the city blocks.  Ukrainian army shells hail from residential areas of the city.

Nationalist battalions block civilians from leaving the city. There are reports of shootings of city residents who try to leave the city. Fighters of the nationalist units fortify themselves in the apartments of multi-storey buildings, keeping civilians there as human shields.

This attitude towards civilians is explained by the fact that the fighters of Ukrainian nationalist formations are mostly from the western regions of the country, while the local population consists of ethnic Russians or people loyal to Russia.

Quotes from residents of Mariupol from Telegram channels: “We sit in our homes. The rumble of guns is constant, hailstones also work. Houses both private and multi-storey are blown up. Azov is all over the city, entry/exit is prohibited. We are hostages. Tanks of the AFU drive into Azovstal, stopped the blast furnace…”.

“The Nazis fired mines at a car cooperative of 30 garages in the Eastern Microdistrict in the Levoberezhny District.”

“They put machine guns in the apartments”

“On the roofs of 9-storey buildings they set up mortars…”

Units of the First Army Corps of the DPR, in cooperation with Russian forces continue their advance towards Mariupol. Overcoming engineering means would be a great difficult for advancing troops. Minefields are located both on the outskirts and on streets of the city. There have been cases where, after hitting a minefield, a unit immediately came under artillery fire and suffered casualties. 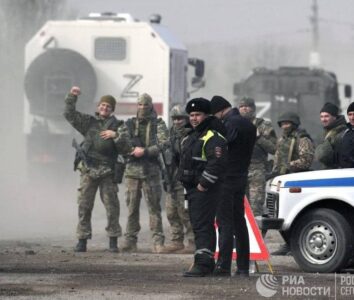 At the same time, a grouping of Russian troops is coming from Crimea toward Zaporizhzhya to connect with the “northern” grouping coming from the direction of Melovoye.

If these forces join together, the largest AFU grouping in Donbass, numbering about 100,000 people, may find itself in the “cauldron”. 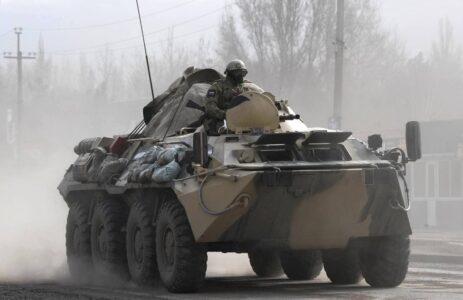 Meanwhile, in Mariupol, preparations are underway to evacuate military, and blast furnaces of the largest metallurgical production facilities are being prepared to shut down and blow up.

Mariupol acts as the southernmost node of a large-scale AFU grouping up to 50,000 men that extends from the Azov Sea, through Marinka and out toward Kramatorsk.

This grouping is encircled and cut off from the south and north by Russian forces.

The evacuation of Ukrainian security forces from Mariupol is already late and virtually irrelevant. Even if the troops withdraw immediately, they will come under attack from both Russian groups, depending on the direction of the breakthrough. They can only retreat along the roads, and they are completely under the control of Russian troops and aviation.

If the Russian army continues to be successful in encircling Ukrainian army units and nationalist battalions, Mariupol will become a cut-off and isolated industrial and military asset in the rear of Russian forces.

The Ukrainian group will be left with two options, either to withdraw through a humanitarian corridor, if one is provided, or to attempt a massive breakthrough in the most vulnerable section of the front, suffering heavy losses in manpower and body strength.

Typical Banderist scum, using civilians as human shields. I hope someone films these crimes, so they can be rubbed in the west’s faces every time they open their mouths to comment about the humanitarian situation in Ukraine.

Corrupt Shithole of Ukropisstan
Reply to  Vlad the Impaler

Azovisis will be good fertilizer.

I want some of those bastards taken alive so they can feel justice.

From Denmark
Reply to  Vlad the Impaler

That’s why I support Russia.

Bandera killed scores of Poles, Jews and Russians, and yet he’s a hero to these scumbags.

Perhaps time to use the CIA method of pinpoint drone strikes?

Cromwell
Reply to  From Denmark

Yes and now we have Poles and some jews supporting the Nazi scum,whats that about?

Vlad the Impaler
Reply to  Cromwell

Ukrainian-Israeli Jewish oligarchs set up and financed the Ukrainian neo-nazi Azov units, these Jewish oligarchs are happy to exploit both xenophobia and ultra-nationalism when it suits their political agenda, in this instance promoting hatred and division against ethnic Russians in east Ukraine. The oligarchs considered the neo-nazi element as expedient, exploitable and controllable, however, they actually started losing control of their own creations, privately funded terror militias, out on the demarcation front lines.

What can be expected from disciples of the Americant Central Non-Intelligent Agency, Mossad goons and assorted MI6 trash?

the birth of modern CIA was done through the help of a bunch of Nazis captured by US army at the end of WWII…so what would you expect?!

Its not that widely known that, post WW2 Germany paid for virtually all of the really significant infrastructure projects in modern Israel as reparations, particularly so during the construction cycle from sixties to eighties.

Vlad the Impaler
Reply to  Corrupt Shithole of Ukropisstan

Nah, they need to take prisoners so they can put them on trial and list all of their crimes for all the world to see. Whole thing should be televised. And then, when the west comments about the humanitarian situation, Russia just needs to throw the footage of the trial in their faces.

Give them a humanitarian corridor to withdraw through.

And then let the Katyushas rain ;)

HuckleberryFinn
Reply to  From Denmark

“Humanitarian corridors”?? yeah like green buses for Idlib in Syria… No thanks. Encircle them, then gradually neutralize them. They are the best, the most fanatical, the most experienced and the best armed UkrA troops, encircling this huge group is more important than taking Kiev. Destroy them and the war is won.

How about dumping the AZOV troops onto Poland. That would be a fascinating scenario to watch :)

Looks like the NAF and Russians are creating a cauldron around Mariupol,it will be the same as debeltseve,pack it in or be annihilated,that way they don’t need to engage in full scale street battles.

Azov unit neo-fascists days are numbered, no safe exit corridors for them. They are militia-terrorists who have long targeted and shelled civilian residential suburbs.