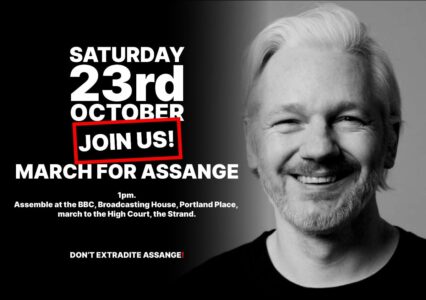 Two years ago award winning journalist Julian Assange was imprisoned in Belmarsh maximum security prison on remand. Over this period Assange has suffered great damage to his physical and mental health. According to Professor Nils Melzer UN Special Rapporteur for Torture Julian Assange is a victim of psychological torture who should be released immediately.

Instead the UK government has ignored its obligations under international law and continues to detain Assange at the behest of the United States,

Back in January of this year Julian Assange won his case against extradition to the United States. Despite this, he continues to be held in Belmarsh supermax prison as the US has taken its time to submit its appeal against this decision.

In September 2021 at the High Court in London the US Department of Justice won the right to appeal its defeat in January on 5 separate grounds. Its appeal will be heard on 27 and 28 October. 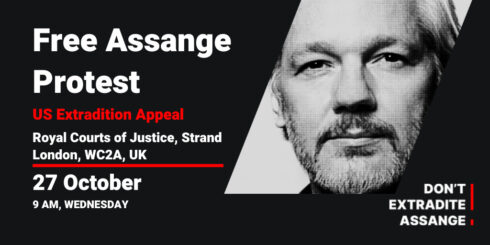 If the US loses its appeal then it will make it very difficult for the Justice Department to continue with the extradition of Assange.

However, if the United States manages to get the January decision of magistrate Vanessa Baraitser overturned then Julian Assange will be in great danger of extradition to the US where he faces charges that carry a maximum sentence of 175 years in prison.

Now more than ever it is imperative that people of good conscience, who believe that those who commit war crimes should be held to account, raise their voices in support of Julian Assange.

Please make every effort to keep this case in in the forefront of the attention of both politicians and the public by publicising the protests below. If you are able to attend please encourage others to come along with you.

On the day of the appeal, Wednesday 27th October, 9am, assemble outside the High Court, the Strand. 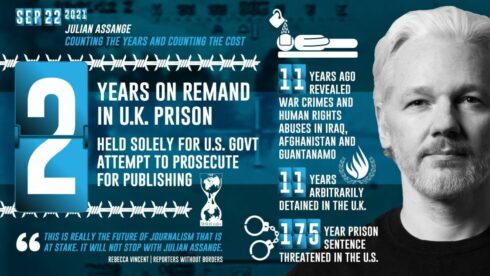 All images reproduced with permission of the Defend Assange campaign.

You are asking the wrong people to release Julie. Ask those who instructed their UK and US lackeys in the first place to destroy him, the zio terrorist jew in occupied Palestine, they call Israel

J. Assange is in prison only because 10,000 conscientious people refuse to march on the prison, bulldoze down the walls and take him out by force of arms. For a long time it has been clear that those who imprisoned him don’t respect the laws of the land. Australian government particularly has given up one of its citizens to the wolves. The whole thing is a disgrace.

Force of arms? How? When the population have been disarmed?

It would be quite sight!!! But the tragedy is not to try, this is your Bastille moment – unlawful imprisonment is the issue. It’ll be too late to act when they come for you. To act does not guarantee success, but not to act guarantees a failure. Up to you people!