Interestiing maps showing how the situation changed in the Damascus countryside during the period from 2013 to 2017 appeared online on May 10. (SOURCE) In 2013, the Damascus government was in a very bad situation. Since then, government forces have liberated the areas of Deir Miqrin, Al Tal, Qudqysa, Daraya, Western Ghouta, the Marj al Sultan Airbase and Maydaa.

Thus, the Eastern Ghouta region, the Qaboun pocket and the Yarmouk Camp remained the only areas where militants (Hayat Tahrir al-Sham, ISIS and others) resist to the government pressure.

With the expected liberation of Qaboun (militants started withdrawing from the area earlier this month), government forces will make another important step in securing the whole countryside of the Syrian capital. 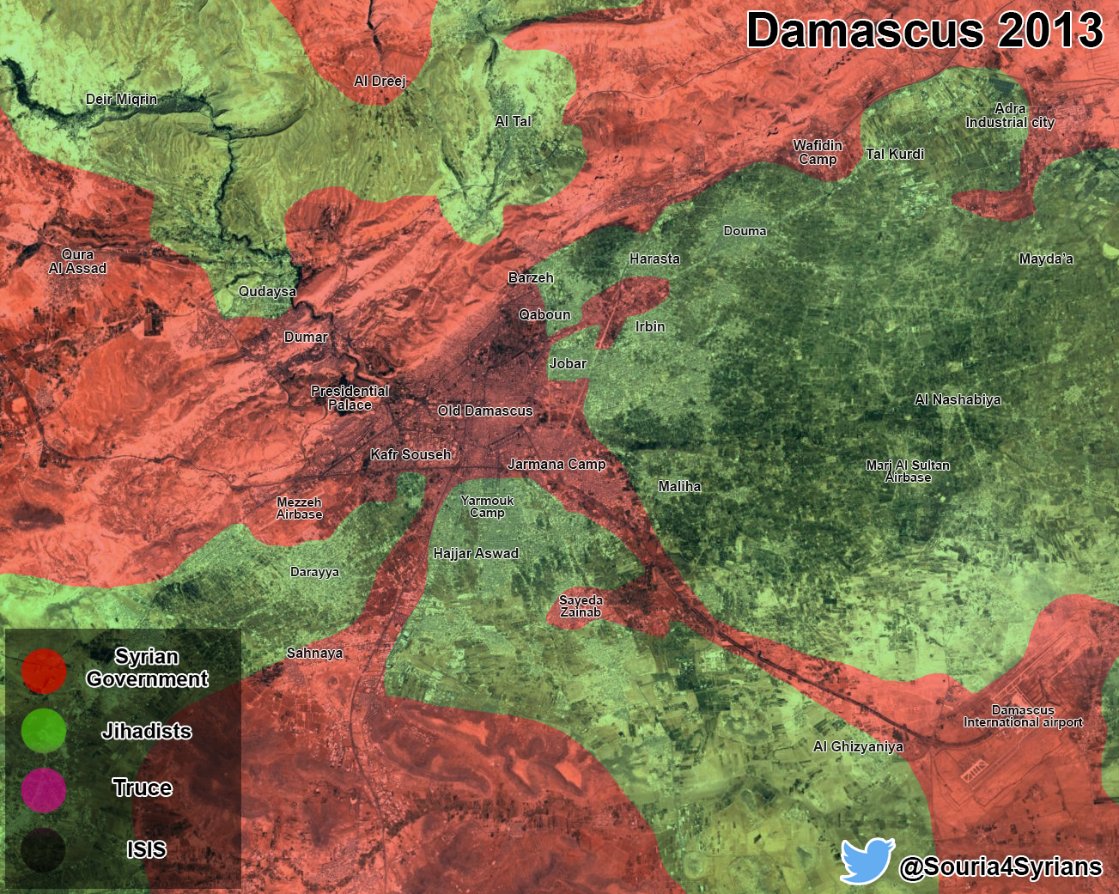 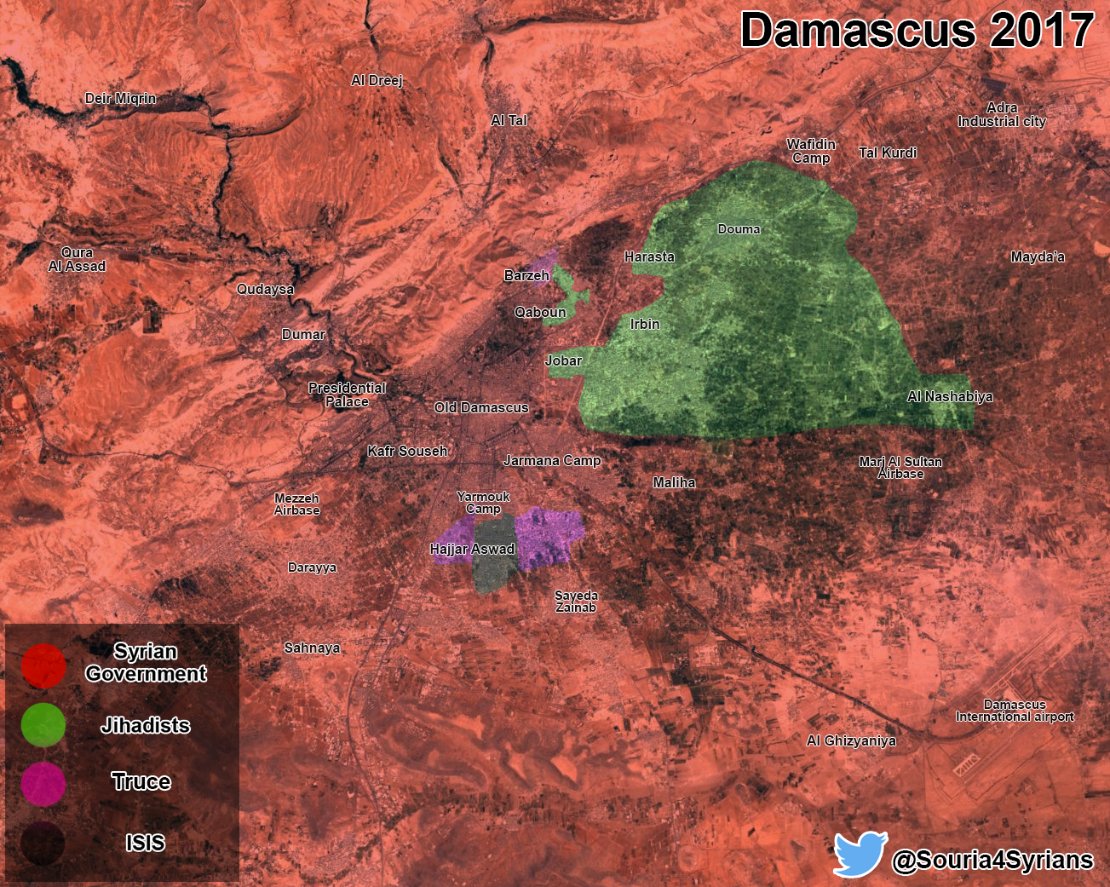 Green turns into red with the blood of the traitors. And those who were allowed to transfer to the Idlib governate will marking this area in red with their blood one day. Go on SAA and allies.

But rebels are Syrian civilians too. Syria is their homeland, and they have a right to have their own political opinion, and to protect it. I am generally on the side of the government. But: if Bashar’s government didn’t do political mistakes, there will be no such a big mutiny. So, my point is: mistakes and crimes come from the both sides – not from rebels only. I mean normal rebels, of course – not islamistic extremists like HTS.

Can you name some normal rebels you speak of? As I find they all love chopping heads and I dont know of one that is likely to be President of Syria to replace Assad. None talk of peace and they are all losing ground fast.

I don’t know exactly. May be some part of FSA, they look like civilian people. Anyway, I know, that the only Syrian cosmonaut Mohammed Faris is against Bashar (while being pro-Russian), and he even was among rebels’ leaders. I am sure this man would not deal with bandits. http://www.npr.org/sections/parallels/2016/05/31/480041357/once-a-national-hero-syrias-lone-cosmonaut-is-now-a-refugee-in-turkey

Not very impressed with the Cosmonaut where he calls Putin a big dictator and Assad a little dictator when both these men are elected by the countries they represent. Why isn’t Mohammed living in Syria where he could be setting up his own party if he thinks he has enough support. These guys dont want democracy more like the Saudi Kings which I call dictators as they have never been elected. I call that article fake news. If he bothered to find out he would know that Assad is in a stronger position now thanks to Russia’s and Iran’s help.

important is, he is rebel, but not jihadists. you lost.

Al nusra is thé big dog on the block=terrorists all thé others are insignificant, you know that very well, stop trying to deflect.

First of all, thinking that the Syrian war is a civil war is a major mistake. If one has never been to Syria before the war, you can’t argue against it. Syria was peaceful, the only secular state in the Middle East, wealthy, free health care, free education but bad infrastructure. There was zero obligation to pay taxes and only state workers did. When will people realize that this war and the many others such as Iraq and lybia are solely based on geopolitical power and petrodollar. The US has since 2003 classified al nusra (al qaeda ) as terrorists but they keep arming them? Is it really a coincidence that nearly all of the arms and weapons in the hands of the terrorists and jihadis are US made?

What the hell was so wrong with Syria that a war was needed? If the west really cared about democracy, they would turn their heads to Africa and turkey and Israel where they are ethnically cleaning up Palestinians. How about Saudi Arabia, the largest and most corrupt and dictatorship in the world? Public be headings, stoning gays, Islamic laws that are extremely hard for anyone that isn’t Sunni to live with etc… yes, Assad was “corrupt” in the sense that his government on occasions stood above the law but brutality and killings were not a factor during his reign. He was loved and cared for by the Syrian people. Many jihadis are in fact Syrians but the majority of them are from Saudi Arabia, Qatar, Jordan and the west. Over 80k in total just from the west travelled to Syria to fight. 80k! Insane! And you should read about the agenda of those who are fighting, they want sharia laws and a new Saudi Arabia 2.0 regime.

Every sane leader would do what Assad has done to defend his country, what would you do if you were president of your country and let’s say Saudi Arabia armed and exported terrorists to your country under the banner of moderate rebels in order to oust you. Would you surrender your country? It would you use the only thing these jihadis lack, the air power, even though civilian causal ties are high.

1. “Syria was peaceful, the only secular state in the Middle East, wealthy, free health care, free education but bad infrastructure” – I do believe and agree.

2.”The US has since 2003 classified al nusra (al qaeda ) as terrorists but they keep arming them?” – I do believe, agree, and I understand vile American policy.

3. “What the hell was so wrong with Syria that a war was needed?” The best question of all. My answer: the reason was the Inexperienced and cruel internal policy of Bashar: now, as I can see, Bashar’s forces are minority – if not Russian help they would not survived. And it’s something wrong with the states policy, when the majority is against you, and only foreign allies can keep you being survived…

Sorry Valery but I don’t agree.for 3 : Syria is one of the 2 last countries with Iran who are not in the way of america/Isarël politics… That’s the main reason why. About Bachar el Assad iit’s just propaganda for justifing intervention and lying to american and western peoples..Like Irak, like Lybia, like Serbia, like many others. NWO in action….

Dear Paolo,my opinion is drawn on the fact, that SAA always and everywhere has a lack of human resources, while rebels have enough manpower: it means that the major part of the local peoples support them, but not SAA…and, in its turn, that means low popularity of Bashar through the country. That’s why, after the victory over the most extremistic groups, like ISIS and HTS (Nusra front), the only realistic measure would be a compromiss between SAA, kurds and some rebel groups. Otherwise the war in Syria would continue eternally.

You are looking at it with a western eye…

Sorry Mad Max but Syria was never divided along sectarian lines. It was a country where muslims celebrated christmas and christians celebrated muslim festival. They could intermarry and socialise without interference. Health services and education are free still, where they can actually provide them. CIA of course tries to exacerbate any divisions, however mild. They had a hard time even in Iraq to get sectarian conflict going. It is set in now, but how many suicide bombings did it take? Ten thousand? We are talking about a massive effort to subvert a country. But Syrians understand that that is the plan and they are refusing to be divided. I wish them all the best.

I hope after the victory over islamists Syrians will be able to create a federation, where equal rights of all national groups and all confessions will be guaranteed. It is contrary to the islamistic point of view, while I am not sure, that it is the goal of Bashar and his alavite Shabiha too…

You are right at one: UNFORTUNATELY religion is more valid than politics there in the ME. That’s why the rights of ALL confessions must be guaranteed in the future Syrian state, which would better to be secular and federative.

Bachar el Assad is not a saint, that’s true. He’s like U and me, a human being and a opposition has always existed in Syria. The problem is the foreigners actors since (and before to) 2011… Since Oct 2015, Syria is helped by Russia, but before Syria was attacked by foreigners (NATO, S-A, Qatar, E-U…) who use pacifist opposition as tool

Rebels have been founde by USA-NATO_Israel, without their help, rebels do not exist at all. There is not a civil war in Syria, there is a complot by USA-NATO -Israel to destroy Syria using terrorists and stupid syrian rebels who believe in the garbage sold by USA-OTAN-Israel. The normal rebels become normal terrorists who have not been able to understand that the main point of this war is the destruction of Syria (their own country). USA-NATO-Israel have been very sucscessful in achiving this goal since Syria right now is almost complitely destroyed. The idea was to use the same method in Iran and Rusia, but it looks like this will not be possible. To destroy Iran, they need to look for another method and they will find it since they want (need) to destroy Iran.

I hope they are all burned, dead and destroyed before they even think about a way to do that to Iran and Russia.

These “rebels” are jihadist scum, many from outside Syria, that only deserves necklacing and public impalement.

Also, majority of arab Sunni, no way there will not be any problems.

But what is your proposal? To scratch all sunni? Please, don’t you forget that sunni are majority among Syrian population.

American media promotes this war as a “civil war” , and they are backing the “moderate rebels” for “humanitarian ” reasons . (“He bombs his own people”). Truth is 80 % of these rebels are from Saudi and Tunis , the balance are from elsewhere . These rebels are all converts to Wahhabi Islam , an ideology exported by the Kingdom of Saudi Arabia . Or US , UK , French , German , Israeli special forces or operatives .

@Valerie: I am in respect with the SYRIAN rebels, not the foreigners assisting them, although to start a civil war was not their best idea to get political power. These rebels have balls, not like the refugees fleeing to Europe to suck at Merkel’ s hanging tits. But the most respect have deserved ALL fighters of SAA, their allies AND the refugees staying nearby Syria and wait for the return to build up Syria again.

You missunderstood. Sure, the FSA insurgents are traitors, but they are fighting for something (false) and risk their lifes. Many young Syrians took the easiest way: the way to Europe and many will stay there doing nothing than typing bullshit in their smartphones….

Lmao, I know a guy who moved to Denmark from Syria when the war started, I asked why he didnt stay to fight for his country and that its just a foreign plot to destroy Syria, he told me I didnt know what I was talking about. Maybe he knows something bad about assad that i dont know, but I think he was just a coward/pussy unfortunately. If I were him I would not have ran away.

I know well that you won’ t ran away.

After 5 years of fighting there is still a green spot in Damascus,…., this is not good and looks pretty bad. The reason for this is that Russia-Syria-Iran have a lot of air-ground power to just disappear this green spot, and they have not been able to do this.

This works if There arent alot of civilians around. One must bé careful to not bomb mercilessly ones own civilians. I Say let Them rot in thé hell they created for themselves

I say that too lol

Yea but you gotta admit its much better than 2013. Besides, pockets like these can’t last forever. I think eventually they will run out of food/supplies and surrender or die, or just be overrun by SAA, whichever happens first.