Several maps were also released outlining the positions and activities of the peacekeepers.

Russian peacekeepers have already taken control of the Lachin corridor, temporary posts have been set up, according to the Russian General Staff.

The total number of observation posts that will be established will be 16.

The tasks of the Russian observation posts in Karabakh, according to the Russian General Staff, are the following:

The maps that were released are as follows.

The situation in Nagorno-Karabakh on November 11th is as shown on this map: The peacekeeping duties are being carried out by the 15th separate motorized rifle brigade “Alexandria” as noted by the coat of arms on the left side of the map.

The map above, as color coded shows the following:

The Russian peacekeepers in Karabakh have armored personnel carriers and armored vehicles “Tiger” and “Typhoon”, the General Staff said.

The second map shows the following: It shows the placement of the observation posts along the contact line.

The red triangles show the positions of the temporary posts.

The dotted line shows the borders of the Lachin corridor.

The third map that was released: It shows the total area in which peacekeeping operations will take place.

The red dotted line shows where peacekeeping patrols will be carried out by Russian military police.

The red triangles show the positions of the observation posts that will be placed.

The fourth map shows the following: It shows the separation into two zones of responsibility – North and South. With the observation posts as red triangles.

The operation is quite thorough and appears to be well-thought through. As reported earlier, there was also a photograph of Russian soldiers setting up an observation posts, likely temporary.

putin the betrayer of armenia

Is it betrayal when you betray someone who betrayed you?

How did Russia betrayed Armenia? The only obligation Russia had as ally is to protect Armenia in case of invasion. And Armenia was not invaded. NK is Azerbaijanian territory by all means. Even Armenia didn’t recognized NK.

Paolinks says that Pashinyan was the real traitor before the conflict. To not help to traitor is not treason. Formally no one attacked Armenia, so there were no reasons to defend it. Artsah/Karabah wasn’t recognized by Yerevan, so there were no obligations towards Stepanakert.

I don’t see how Russia betrayed. They didn’t interfere in the war until Armenia asked for it. And when they did, suddenly, all turkish operations were force to halt. Azerbaijan was forced to sign a peace agreement in a moment when it seem to achieve military victory and was suppose to take ALL the NK territory (we don’t know if they would do it, desperate people tend to be very dangerous and winter is already falling in the Armenian mountains, but let’s assume). Turkey is not allowed to send any ground forces in the region.
I see how Armenia was saved by a tukish-arab invasion, Armenians are removing western Pashinyan from power by themselves and Russia is consolidating its influence at the border with Azerbaijan.
Of course things would be completely different if Armenia would recognize and absorb Artsakh. But they didn’t do it, unfortunately.

armenia ask for help for a month, instead he let the turks use yid drones to kill armenians and steal land from them fuck putina

no, they didn’t
Armenians asked for help (some did, some didn’t), but the Armenia’s government asked for help at the end of last week, meaning few days ago!

as usual, gypsy greek = turk down votes ALL my comments
feel welcome!

Same with me.) Let’s heal him with his own pills.

Russia saved rest part of Artsah (it’s core) and local armenians from ethnic cleansing. One more time again. If not this interference, Mountain Karabah could lose its armeinian population totally in next few weeks.

putina would like that but then russian people will lynch him

Does seem like it was planned even before the war began. Karabakh has been sold, but not by people. It was sold by countries. Pashinyan was just a pawn, and now the hand that used that pawn has instructed its media to throw him away.
Its a win-win-win-lose situation. The only complete loser is Armenian people that will face the consequences of this game. Now they need to think how they got here, who is friend, who is foe. And how to move on.

The Russians played a bad hand well. Though enormous damage was done to their arms industry as Russian air defense systems were used for zioblock target practice as they were flown over and destroyed with impunity. And with the exception of manpads, were completely ineffective in countering what should have been minor threats blown out of the air with ease.

Anyone in possession of or thinking about buying Russian equipment that is so utterly incapable of performing to specification. Has got to be questioning Russian weapons purchases and political, military and security alliances.

I hope you don’t really believe azeri-turkish war propaganda. Also, you have to make distinction between Armenia’s and Artsakh armies capabilities.

The anti aircraft systems were reportedy destroyed in both locations. Some of it’s propaganda. But the fact is the drones were never stopped. S-300s and the rest can’t stop large 100mph drones?

There aren’t any sites showing anything much different that I’ve seen.

There are. https://lostarmour.info/karabakh/#statistic
Propagandist “Wikipedia” says about 10 “Tors” and such big numbers of obsolete AA systems that never existed in Karabah. “Tor” is 9A331MK, ctrl+f and enter 331 to see how much “Tors” were destroyed. Just 1 proven fact of not active machine, which ended its days being parked in a garage.

I’m on my phone and the site doesn’t work well. But it lists losses. Not inventory. Which was the point of the comment that you replied to.

Excuse me, indeed, it’s inventory. It’s inventory of Armenian forces, not Artsah (armenian republic of Karabah). Yerevan didn’t sent a lot of troops, so it’s doesn’t matter how much numbers they have. I don’t like “Wikipedia” at all, that’s why i didn’t pay enough attention to read that it’s all about arsenal of Yerevan. Arsenal of Stepanakert is much more modest and outdated. By the way, i see how old armaments labeled by modern russian flag, though it’s old equipment with modernization. Armenian S-300 is also very old, it’s the first version, S-300PT/PS with 90 km range. AZ have S-300PMU-2 with 200 km range.

Russia has an air defense treaty with Armenia. Which indicates that this equipment should be up to snuff to deal with drones. And there are reports that entire batteries of S-300s were wiped out in both Artsahk and Armenia. Along with other air defense systems. Any rational military analyst has to be questioning the disastrous performance of Russian equipment and the value of Russian defense treaties for national security.

Granted, everyone recognizes the extenuating circumstances in this case. But these weren’t some rusty discards bought for near scrap. These were front line units that should have faired much better than they did.

Looks like a hoax. I know about this info from second week of war. As always, no evidences. Don’t forget, it’s part of turkish/azerb-n propaganda and can’t be trusted, same as armenian propaganda. “Reuter’s” is obviously anti-russian outlet, they will be happy to share any crap touching Russia (as they think), even if there is no connection at all in reality.

It’s on the Lost Armor site along with ecm and radar destruction.

Goris, it’s Armenia, southern part. AZ didn’t attack Armenia as i know. Other photos shows not active launcher (containers down), but no photos with results of the airstrike, no video. 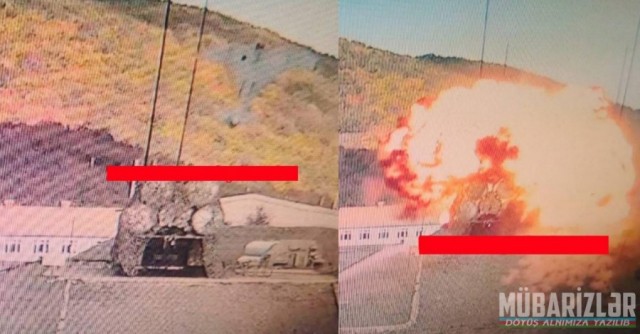 Where are these images from?

From multiple sources, use search on image. They say that it’s the moment of the attack on armenian S-300, but for me it looks like photoshop. That’s why i don’t trust to the claim about S-300, no straight evidences. But i could believe in destruction of radar, if it really was armenian and not old photo from another country. The most sophisticated system lost by armenians is wheeled “Tor-M2KM”. They used it alone with no cover and lost it when it was parked in a garage. There is quality video, not this cartoons about “Panzer” from Syria made by turks.

Did i say before that all info from this site is 100% correct and can’t be doubted? I said it’s much better than “Wikipedia”, because there are no hundreds of tanks or tens of SAMs, even if to count all suspicious cases like this one. People here tries to check every case, doing it unbiased (on my opinion), but can’t do it with full guarantee. “Wikipedia” is written by biased dilettantes as i think. The choice is up to you.

Questioning the validity of a source is weaker than disproving it with superior evidence. I don’t speak or read Russian. Though lost armor is bilingual. But most of the source material isn’t in English.

I’ve seen instances where Wikipedia is off. But it’s rare. I don’t agree with their 911 article. I don’t think that I’ve seen anyone here who questions it ever disprove it. Though you’re welcome to try.

That only if Putin and Erdogan didn’t have a secret deal so the Armenian AA to stop working.

Anything is possible. But the facts speak for themselves.

The facts even say that the Su-30 in possession of Armenia where never used.

And the fact that Turkey has bought S-400, means that your first post is utter garbage.

There are a lot of reports of Russian air defense systems being destroyed in both Artsahk and Armenia.

Destroyed by what, Richard? That Russian AA system is multilayered. S-300/400 is the top layer. After that is Tor and Pantsir. UAVs and smart flying bombs are for Pantsir and sometimes for Tor.

If they’re taking out S-300s on down. They need to be hit. If S-300s can’t drop a drone before getting hit by it. What good are they? People are dying because Russian anti aircraft systems can’t take down 100 mph drones.

Yeah and we know how trustworthy they are. According to AZ, they have destroyed 50-60 S-300 batteries. But more serious sources say that Armenia has/had no more than six!!

There shouldn’t be any. And it’s not just S-300s. These are 100mph drones that Russian anti aircraft systems are supposed to be able to drop easily.

But how many? You cannot shoot down 300 drones with a single S-300 battery.

This is why Russia has developed EM weapons.

Also, why the hell the Su-30s have not been used at all? Because they are ineffective? Really?

Oh please… you’re talking about old Soviet gear being operated by a second rate military. No competent, modern military need fear some shitty drones, which still went down in the dozens.

You don’t know what inventory the Artsahk forces had. But several systems were reportedy destroyed, up to S-300s. Which shouldn’t have any trouble taking down drones.

You also don’t know what Armenian systems where in play. Which also includes reports of S-300s detroyed in Armenia during attack or attacks on Armenian bases.

Anyone responsible for national defense who has or is considering buying this equipment is questioning why it faired so poorly in it’s first combat debut.

Especially when Russia has an air defense treaty with Armenia. Which indicates that this equipment should easily be up to snuff to deal with 100mph drones the size of a Cessna 150.

One more scheme. There will be new roads from Lachin route to Stepanakert and from Nahichevan’ to AZ.

Part of the road from Armenia to Stepanakert. The plan is to build it in 3 years or faster.

Could you provide a damn english map ,not this unreadable Cyrillic script

I’m not creating these maps, so not.

So is that corridor going to remain part of Armenia? Or is it just a Russian occupation zone in Azerbaijan?