Recently, the US-backed Syrian Democratic Forces (SDF) declared that they had established full control of the Syrian-Iraqi border, on the eastern bank of the Euphrates River after defeating ISIS militants there.

However, despite these claims, the security situation in the area remains tense. ISIS cells are still capable of operating in the border area and, according to local sources, further attacks by the terrorist group could be expected soon. Now, will they or won’t they? Is Trump the messiah 2.0 or are we still rambling on to a world war?

it dont matter who is president where……….the agenda is the only thing that counts for them…..
a one world government with jerusalem as its capital under jewish satanic leadership

Yearhh probatly. If we didnt invent christianity as well as Islam we were the United Jews.

There is a world economy but thats a world economy and no agensy. You constantly repeat thet EU, India, China, japan and many others is not in it. But we are. The BNP/GDP of EU alone is just as big as USA as one of many examples.

But of course its easy and cheep only to blame americans, even You are in ancient Mujammed economics 1400 years old – and even insist. None of You hardly cant even produce simple plastic buckets even You ahve oil for almost free.

If it was for You to decide oil only was for lamps.

This really means that Isis has just changed uniforms.WTF were the Kurds doing for the last year or so,R%R ?.No amount of zionist BS.will prevent the Syrian Forces from retaking it’s territory from terrorists, no matter what name they call themselves.

Must be convenient to lump everyone under the same flag based on your agenda. Recently the SDF has been a bit preoccupied with Turkey’s military operations against them (Olive Branch sound familiar?). Let’s not forget who’s made the most inroads against ISIS throughout the majority of the Syrian civil war allowing the SAA to mount the comeback against rebels that they’re on now…yet you say they’ve joined ISIS just because they want an Autonomous slice of the pie that they’ve been fighting for and have lived in for generations…ok dude.

Why should less than 10% of the population be granted special rights of autonomy? Kurds are a minority who betrayed Syria to allign with foreign invaders.

Same reason exactly Turks have no reason to call the ahots in Cyprus.

No wonder kurds prefare to be less with You.

What kinda Drugs did you Use?

Wrong,the Kurds are traitors, and working with zionist scumbags who want to divide Syria. Why did the Kurds allow the destruction of Raqqa? Because it’s not part of Syria where they lived,,But they want to control land that’s not lived in by Kurds and never did.When Syrian Forces fighting elsewhere, bring their full attention to eastern occupied Syria then we will see how brave and tough the cowardly Kurds really are,,because the zionists will throw them under the nearest bus when the Shit hits the fan.BTW,fuck zionists, and israhell.

Hallo. Your name is minus.

Hey…Dozo the Clown how are you?

Allowing more than 20 yankee bases, we only see yankees, we don’t see, till now, the SAA comeback, But the SAA are going to comeback, the yankees will go home, and if some syrian kurds, those who think that have a yankee umbrella, rest in Syria or will go abroad, it’s their own problem. Autonomy, local power, yes, a fake federation or confederation, no. Those who will insist prepare to emmigrate, as the takfiris.

Not one problem with the Kurds fighting ISIS, the whole nation has been fighting them. The SAA also had to deal with Al Qaeda and its off shoots, that were armed and financed by the USA, branded as “moderate rebels”, but not moderate, and not rebels. 80% Saudi and Tunisian Wahhabi jihadists. Not a civil war, an American war.
One Syrian nation, with one army. The Kurds would be wise to join the SAA.

Heaps of TurkoKurds in ISIS and In “moderate rebels”. Main leader of ISIS from day one was a Kurd comfortably housed and nursed by Yanquis in Norway til called him to Jordan to form ISIS.

Yes, they visited some bears at Svalbard. Thats why isis is so cool.

This is what you get when ISIS meets a Polar Bear… 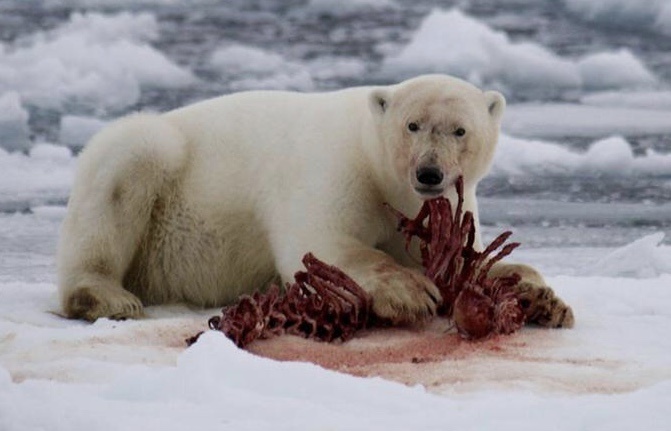 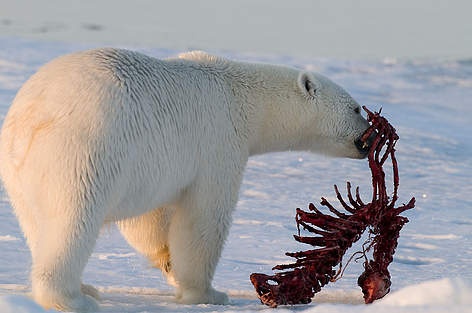 If anything the SAA should join YPG.

Not even Your granchildren havin candy in beoth hands believe any of Your non sense.

“having candy in beoth hands”, would you translate that again, so that it makes sense.

Ah, ……… that is not what happened. You have your take and that is fine. However, the bulk of IS fighters where in Iraq and places in Syria where the Kurds did not operate. It is also well publicized that a significant amount of fighters under the SDF banner, were tribal forces that had been previously aligned with IS. I am going to strongly disagree with you on the SDF making inroads. They have had a hell of a time in eastern Syria trying to clean them out. I wish well to you Esenpai.

12 sheep all have bad memory or evil thoughts. No one else listen much to it apart from themselves.

A pity there is no Nobel price for slow learning. They all would be rich.

Syria is a landscape, and they already lives there.

Denmark is just a piece of Land…why did you Folks Ban the Burka today? It is time to accept Sharia…

50% of our Muslim emmigrants still has no jobs and feed themselves after 10 years. Those cost us more then 5 billionj dollars a year. Why should we give away that much money.

If You take others from all over the world it 80 to 100% after 10 Years. They change and adapt, integrate and mainly almost assimilate.

Whatever the female more or less closed stands for known as a free choise or the opposite, its in a system, which make women to second class citicens. And we see the difference very well all over in Islam, Muslims countries.

Its not fine for us women in a muslim context are in a moderat muslim, when we see the many things, which is not equal rights at all. That clothe much more also symbols the muslim man dont learn to behave and from the start is learned to be above vomen. Muslim men dont learn to behave, so its not even a matter among those women andGod above. Its very much used as protection against men.

And Yes, we see it here as a dayli attitude from great parts of men, and women has a divorse rate much higher then men because they expect vomen to be the same as once upon a time ago.

And if anything, we prefare Your girls and vomen from men. The dont say that our many vomen teachers are stupid, hores and unclean. Instead they do, what all learning them things do. But many even after good education cant adcvance as leaders, because they dont learn to decide well themselves. That they are raised to.

But at least they are in the lower well paid part supporting themselves. And by that its obvios we have 1000s of men, which has not followed our free education and no muslim as well as – old danish – women would like to have.

And we see the pressure mainly by the families at the females. Those has to regain in a muslim context in a country they never has been in and come back here made as low as it gets or gets married as even lower, where the parents once came from.

And the men stays stupid. Many of those has deroutes changing into need for calming pills, drugs, khat alcohol and like that. We see many as homeless even they could get a very small home for nothing. The forced and divorced vomen are totally overrepresented in homes for vomens protection.

Before they escape to there, they are forced by threats, all kind of violence and some Imam has told them, THEY shold behave.

So You have so many women in Islam here, which families has told them to stay away for ever and traumatized forever. But we also see many of those moved to another town or village becomes what they started for in education and later on getting husbounds from anywhere else far from their childhood.

Many of them seemes to become very sekular muslims changing into same clothe as us and then have to have their freedom by camouflage from non sekalar muslims – but too often also because they are afraid for hard revenge and muslim dis-honor.

Above that most incommers were men. Why add those problems by mre men. If they are so strong, they should stay were they come from and change copying at least our good parts.

Our good parts are as written, that we by our system actually are productive to make very much plus by school, education, skills, hard work and paid by after after qualifications – not some carrot below or being extra nice to old family members.

But why should we give our extra result to some no changeable muslims in an system which certainly dont understand us.

I see it here every day at these pages and orthers I follow. Most of You have no idea about, what we are. No idea.

You dont understand what PYD/Marxist want at all even great parts makes a lot of sense being a part of the rest of the world. And they are locals during 4000 years.
…………………………..

When You talk about americans like that, You are wrong too in most things. You not even undertstand that 80% of our companies are runned by stockings and everybody owns them. You can be an owner Yourself and buy small corners of them at the stockmarket. That doesnt make You to an american, a japanese or Kuwaitian.

None want Syrian dirty sulphur asphalt oil. Its very well for Syrians themselves and give a little by sale to other poor ones. Thats it. But You are telling each other that babling non sense here again and again like learning verses in a Choran school. Even I dont like Islam, its at least a kind of truth comming from above or not.

And You have many of those Glostblockers – All says – we are this and that. If that was true all men in Syria and a few YPJs should go home and drink tea and there was no more war.

If America & IsraHell didn’t send their MI6-WAHHABI-ISIS-FSA-al-ZENKI-HTS-al-QAEDA-MUSLIMBROTHERHOOD-TAKFIRI-HEADCHOPPERS… there wouldn’t have been a War in Syria…
Your story becomes Strange & Uncomprehensible using Google Translate…. Try to Translate it in a Proper Way & Send it Again please… thanks

Man the the SDF is good… of course when Pompeo calls up ISIS and tells them, “Boys let’s call it a day” that really helps.

Is there any evidence of any fight ? Please, post it !! Maybe ISIS just joined SDF, and that is all.

Do You really believe that Yourself. fanatic muslims joining Marxists ? Who told You.