According to pro-Turkish sources, the Turkish Armed Forces and the Free Syrian Army have captured 72 different areas from Kurdish YPG forces in the Syrian area of Afrin since the start of Operation Olive Branch on January 20. Meanwhile, the YPG is conducting negotiations with the Damascus government, which could allow the Syrian Army to deploy its units to Afrin to defend the Kurdish-held area. MORE DETAILS Russia has ties with both Turkey and Kurds …. and Syrians too.

So it is better for Russia to keep out .

Having a brewski at Khmeimin? The Turks are doing exactly what Russia wants them to do.

“According to pro-Turkish sources…”
after this you can stop reading.
;-)
Read some fairy tales instead, hhey contains much more truth…

Assad must not help YPG. YPG wants so-called “rojava” and cut half of Syria. Let Turkey clean out YPG and Syria allies with Turkey to find a solution.

So true, the YPG-SDF-PKK all same shit different packing, now want to have both sides, they have the US, and now they want SAA/Russia to be with them. They are like monkeys they don’t want to let go off from the one branch until they grab the other branch on the tree.

If Turks ‘clean out’ Afrin, they would run into American forces, a messy deal in the end. So let Assad make peace with the Kurds, it’s the easiest way for him to get back Northern Syria and the Eastern Euphrates Valley.

Back stabbing Turkish Kurdish heroes went though all of that to get isil out of ower hair and streets [terror attacks] and only the grave yard awaits horrid insanity,Home sweet home for the Kurdish. .

This would be a test for Turkish and Kurds in the following way: Syria will tell Kurds that they must move to Kobani or Tel Abyad kurd areas, and allow Syria troops to occupy totally Afrai area. At the same time, Russia must tell Turkish that they move out totally from Afrain area. Of course, none of them will accept this, because both of them are looking for steal something from Syria.

Everything happening here is bad for syria.

The ypg forces does indeed include many PKK fighters from turkey and SDF kurdis fighters from iraq. The kurds want full independence from syria, and eventual expulsion of native arabs. Full autonomy is a legal fiction for secession.

The FSA fighting with turkey arm forces (TAF) does indeed include alqaida veterans and saudi drafted salafist who want oppressive theocracy with religious police and will execute other sects and religions. Turkey wishes to carve out a syrian colony for itself.

Neither side gives a damn about afrins who want to remain part of syria, there are hundreds of thousands of Syrian Arabs there would would suffer under either FSA or SDF control. Neither one respects syria’s right to defend itself.

Your right…it’s very complicated..there is no right just a choice between bad and less bad. 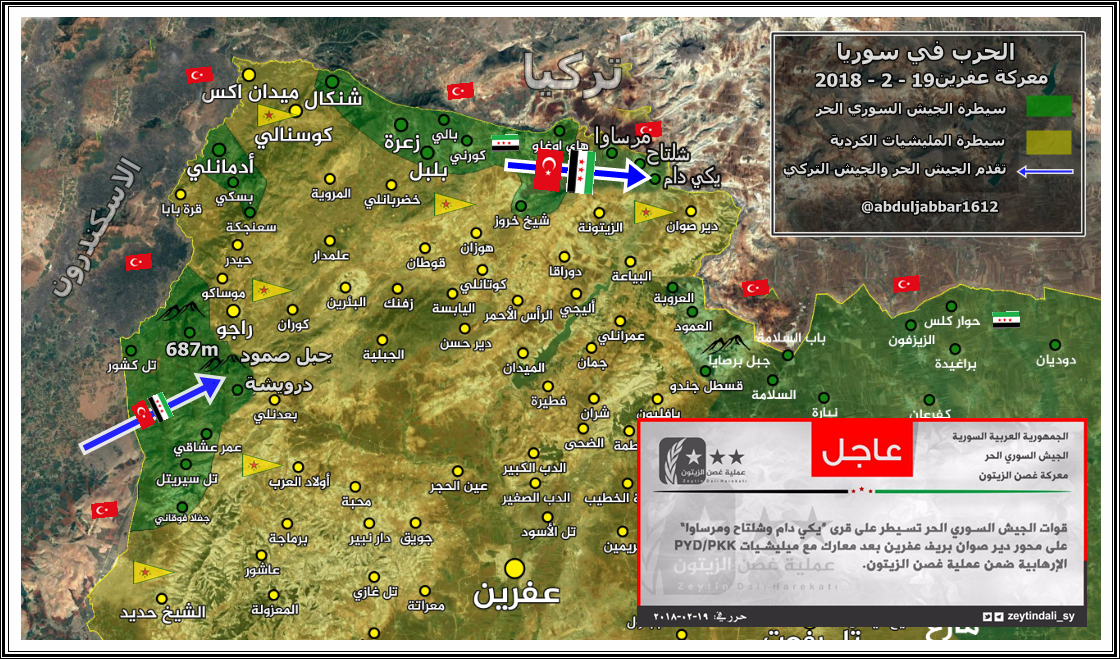 Most probably the Syrian government, as is its fundamntal right as the sole legitimate authority in Syria, is demanding that joint deployment should not only cover Afrin but all other areas under SDF control, especially the Eastern Euphrates basin areas. This however will be problematic since the US dominates those areas and the Kurds are just fodder and puppets in US hands. I don’t want to be in the position of the Kurds. They know that the US will dispose of them like garbage after using them to achieve its geopolitical hegemonistic goals, yet they have to make a choice; Either joining the Syrian government forces in the anti-US/Zionist colonialist imperialist alliance, or remain stuck were they are and be destroyed by the US and the Turks.

So the best solution for the Kurds is to agree to join Syria without US aid anymore or be destroyed as a race in Syria if they go against Assad .

They should know that US has no basis to be in Syria and they stand alone against the might of Russia, Iran, PMU, Turkey , Hezbollah , entire Syrian nation …. how the heck can US be able to stay in Syria is beyond even morons.

Congratulation Syria, defend your country from the invaders hidden agenda.