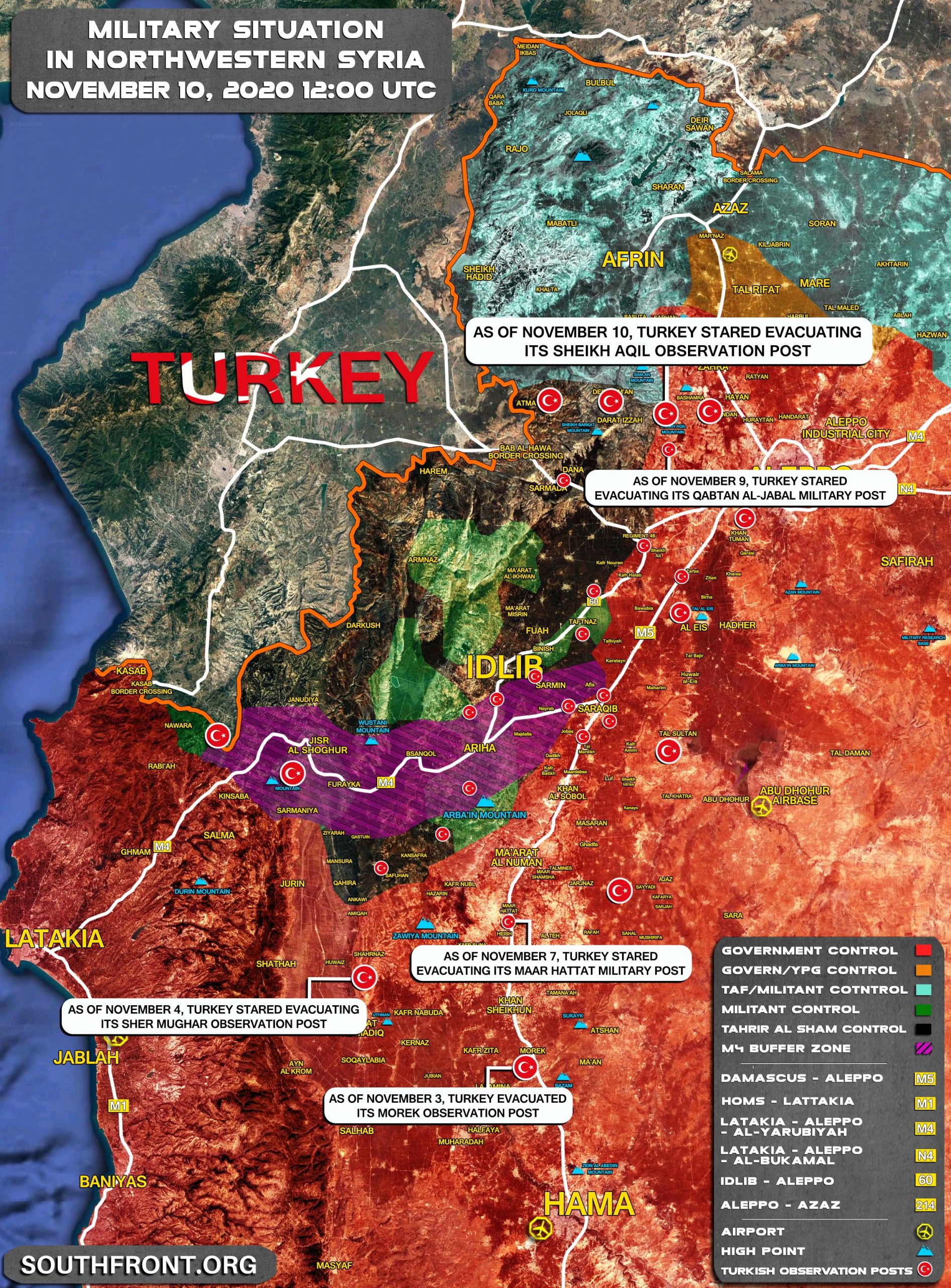 Since the start of November, the Turksih military has started reducing the number of its military positions and observation posts in Syria’s Greater Idlib:

As a Turk, I don’t support the military presence in Idlib. As long as pyd is removed I am fine with Assad.

Finally one Turk making sense, the PYD or SDF are treacherous to Syrians.

After all, they are funded by cia. No surprise.

you know Fsa are found by Erdogan

The muslim jihadi Gypsy sultan has opened toooo many fronts for his gypsy muslim monkey”army” to sustain!!!!

It is not about too many fronts. In the normal conditions Turkish economy has capability to support those fronts. But he screwed the economy.

The thing is, Idlib is not a front at all, it is a swamp of headchoppers and nobody knows what to do with them. Without the protection of Turkish army, saa will obviously attack them. I am quite sure they won’t stand their ground and try to flee Turkey and then, Europe… everyone knows the rest of the story… suicide bombers in the metropolis.

Or were they the whole time?

Pretty much whole time. Kurdish organizations know that they don’t have a power to declare themselves independent, even in torn apart Syria and Iraq. They relied on US and Israel from the beginning.

Turkey needs to stop meddling in Syria as its Wahhabi terrorists have no chance.

Here is what is happening.

You will soon see Turkey pull out of Idlib as part of this deal as they can now save face with the defeat of Zio Soros Armenia.

The Soros Armenian leaders will now be purged and sent back to the JSSA.

Turkey Syria Russia Iran, Iraq and China will now all jointly attack the kurds and kick the USSA out of Syria and Iraq.

China is to invest massively in Turkey like Iran to save their economy and country as well as Syria and Iraq. a Middle East martial plan. Another huge defeat for the racist supremacist global Jewish Satanic slave empire dictatorship.

Azer got all they wanted. They will rule over all of NK with a bit of autonomy for a small part of the NK region.

Now Azer and Armenia will be bound to the EEU, Russia, China, Iran etc., through the silk road trade routes and economy. These economies will soon be many times larger the those of the collapsing racist supremacist global Jewish Satanic slave empire dictatorship combined the JSSA and the JU.

All Armenians should be thankful for Russia stepping in to save Yerevan and all those fleeing Armenian civilians and panicked soldiers retreating from NK!!

Pashinyan and the rest of the anti-Russian Soros coup leaders would not send 1 Armenian regular soldier to try to help them escape from NK to Yerevan.

Since the start of November, the Turksih military has started reducing the number of its military positions and observation posts in Syria’s Greater Idlib:

As of November 3, Turkey evacuated its Morek observation post.

Azer will make a lot of money with China, Russia, Iran and Turkey as allies, many times the amount of money they can make with Israel, so good bye Israel.

Its all about the Chines Yuan and making lots of them as the Zio dollar collapses.

No Zio dollar means no Israel and the end of the racist supremacist global Jewish Satanic slave empire dictatorship.

Erdogan and his admin doesn’t need unnecessary military observation posts deep inside Gov’t territory they will instead build others in their held territories in Idlib.

Turkey will never vacate northern Syria as it would overflow refugees into their borders and this is top priority in there main national security. Turkey will never accept to be force feed additional 5 million population this would derail their economy and there security and the countries harmony. Which is why they were willing to risk a major war there to begin with and they stand firm on their national interest and countries well being above everything else

Stfu pakistani asshole.Hope you get fucked in balochistan asshole

Tell your mummy to wash your dirty mouth with janola fukwit. At least his comment was thoughtful and interesting to read , unlike your gutter trash. I have a ducks back so throw as much water as you like.

They’re probably just moving them around, not withdrawing them entirely.

Turkey’s removing all it’s OB posts in Syrian Government held territory, so is that a good sign or not, on face value it is, it gives the impression Turkey’s not going to try and dispute the new dividing boundaries or dispute Assad’s new territorial gains, but on thinking about it I also realized they’d do the same thing too if they knew hostilities were about to erupt again, they wouldn’t want small pockets of their soldiers isolated behind enemy lines if a fight broke out. And now with Erdogan’s impressive and decisive defeat of Armenian forces in Azerbaijan, I can’t help but think scenario two is just as likely to be the reason Turkey’s vacating it’s OB posts as scenario one is, so I’m not sure why they’re vacating them anymore, hopefully it’s the number one scenario and not number two. Just imagine Erdogan deploying the same tactics and effort in Syria.