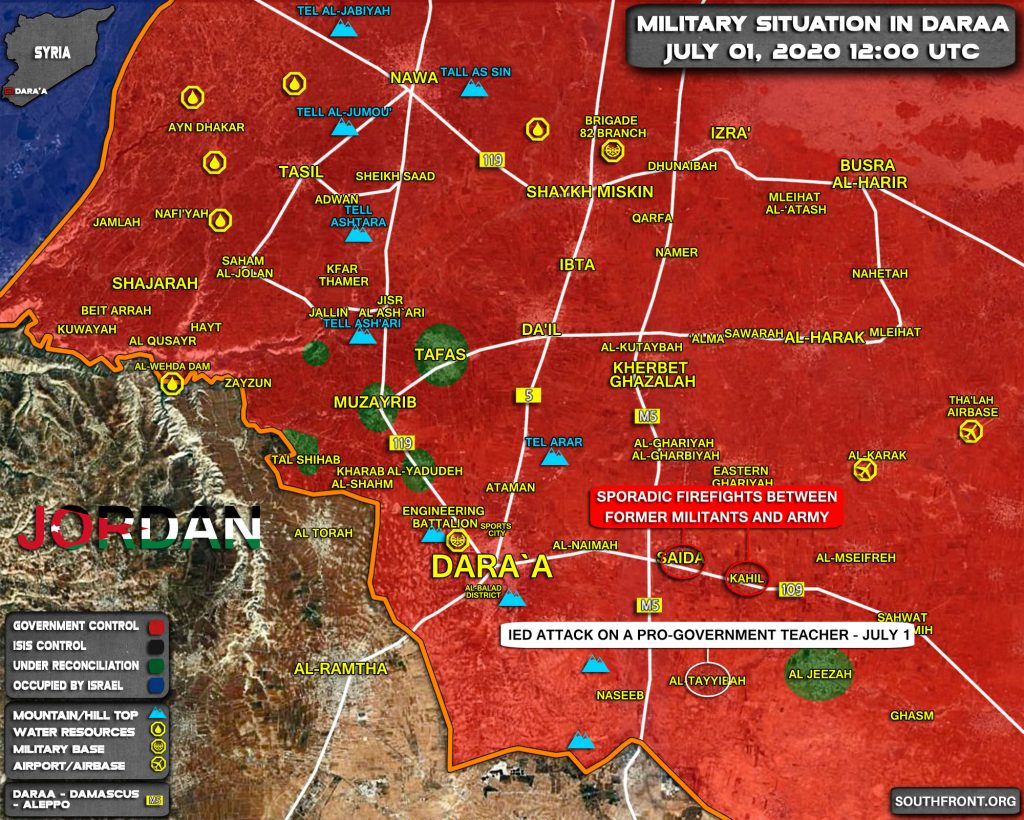 The security situation remains complicated in the province of Daraa. Tensions there are a result of the conflict between the army and some of the former militants, who had reconciled with the Damascus government and formally joined the 5th Assault Corps. As a result, at least 5 soldiers were recently killed in the countryside of the provincial capital and the army withdrew from the village of Kahil Jizah. Local fighters seized all the checkpoints surrounding the village and removed pro-government banners from the area.

The situation in Daraa province showcases the existing difficulties in the ongoing reconciliation process in southern Syria. Some former members of militant groups still remain committed to their radical ideology and hard-core anti-government views. At the same time, they continue to demand protection and resources for their areas in the framework of the reconciliation. Actions like those in Kahil Jizah undermine the peace process and set conditions for a new round of violence.

Big Mistake to open the border to Jordan! Trouble started again after they opend the border!

The trouble only started a few months ago but the Jordanian borders been open for nearly 2 years.

“The situation in Daraa province showcases the existing difficulties in the ongoing reconciliation process in southern Syria. Some former members of militant groups still remain committed to their radical ideology and hard-core anti-government views.”

When you tell your soldiers they have to go and stop their families, relatives and friends protesting against the Iranian presence in their neighbourhoods, and they also have to use force to do it, no one should be surprised if the soldiers refused to accept those orders. But who gave the orders is what’s really important, was it the Russians who supply train and pay these soldiers, or was it Assad on Iran’s urgings.

Russia vetted these guys very thoroughly, they wouldn’t have been invited to join the SAA if Russia thought they were religious zealots. The criteria Russia had/has for enlisting to the the 4th and 5th army corps is the opposite, they tried to exclude religious nut jobs, the nutjobs could/can only join the NDF militias. Assad conscripted more than 25,000 ex FSA fighters into the SAA straight after he won the Darra/Quneitra campaign without vetting them, and they’re all nutjob religious zealots, so if some of the Russian backed SAA soldiers are defecting now, why aren’t the 25,000 reliligious nutjobs Assad has in the SAA also defecting. Religious extremism has nothing to do with this breakdown of the peace process, it’s religious intolerance and oppression behind everything now, that’s the real cause of the breakdown, but who’s oppressing who.