The Syrian Arab Army (SAA) and its allies have liberated several points, including Arimah, Maydan Ghazal, Bab al-Taqa and Shariaa, from militants in northwestern Hama. MORE ON THE TOPIC Going for the the heights to flank Al Ghab Plains.
Good progress by SAA, just past the Idlib border also. :)

Appears to be a lot of farm land N of Al Shari’ah on the plains.
This will be good to keep the SAA offensive rolling. :)

thats the first thing i saw, SAA is up on the Jabal, from there they can use there artillery advantage and.blow away al nusra.

it’s been very easy so far for saa. can be trap they should be careful. turk r there to observe the situation not to fight as agreed with Russia and Iran.

nothing in war is easy. The SAA army is rested is well armed and has the airforce to soften what they are attacking as well artillery, beside the fact the terrorists they attack are already defeated several times and know what awaits them now. Not much spirit for fighting left as they have no where to go but 6 feet under.

ur mum is fake

The goat was asking for it.

Taf-ing knows this because his mother taught him to speak her language.

I bet you hope so but you’re up for a rude awakening.

And not before time – imperative that SAA advance north along Jabal Zawiyah watershed and take and hold Jisr al-Shughour and Khan Sheikhoun otherwise HTS/NLF will remain, along with their Turkish sponsors – just hope Operation Idlib Dawn isn’t limited to immediate exclusion zone , i.e. no move beyond 30 Northing and ends leaving unified enemy (HTS/TIP/NLF/TSK -they are ALL the enemy here!) intact. 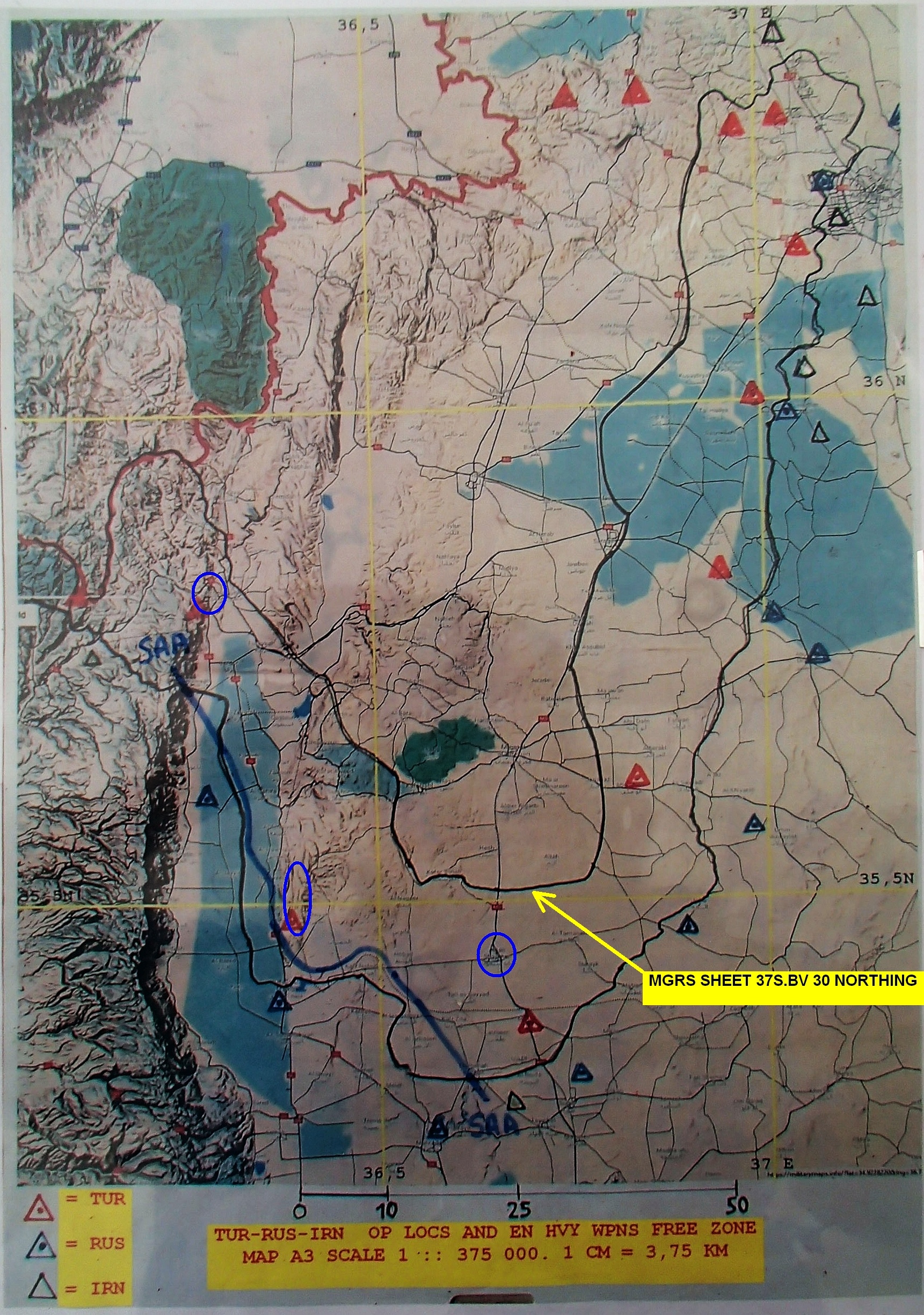 IThe objective of the Op is to liberate the whole city of Idlib city, it may take time time, but he SAA is the one dictating the tempo (we might see some pauses in advances here and there, some political settlements with the Turks, some reconciliations etc). Lots of those terrorists at some point will surrender and accept deals, but the foreigners have nowhere to go not even the turks won’t let them cross their border, then they’ll prob fight to their miserable insignificant death !

Disagree – Idlib CITY is of no importance, just a dead end to nowhere, only symbolic. Turkey has invaded and occupied all of Northern Syria (Aleppo, Afrin and Idlib governates) Sure they use their own trained jihadi dogs (NLF, HTS, TIP etc..) but Turkey will NOT withdraw back across their frontier unless forced to. Who is going to attack Turkey ?? Not Russia that’s for sure.

I am affraid u are right. Still SAA made some major gains with Russian support and it looks like the operations continue despite Turks crying they should halt and withdraw

Afrin is part of the Aleppo governorate.

There’s nothing quite so heartwarming as the sizzle of Jihadis having it their way.

Half a year, plus, and they failed to reconcile.

Their agricultural contributions will be valuable.

BEIRUT, LEBANON (1:10 P.M.) – As if the Syrian Conflict couldn’t get any more complicated, a new proxy war is brewing between several foreign powers in the northern part of the country.
Speaking from Damascus on the condition of anonymity, a government source told Al-Masdar that two new alliances have emerged in northern Syria, with one led by Iran and Turkey and the other Saudi Arabia and Russia.

According to the source, Turkey and Iran have forged a pact to not only carry out a joint operation in northern Iraq, but also, potentially, in northern Syria.
Meanwhile, Russia and Saudi Arabia are attempting to work out a deal that would see the Syrian government and Kurdish-led Syrian Democratic Forces reach a peaceful settlement.
Saudi Arabia maintains close ties with several Arab tribes allied to the SDF, including the Shammar Tribe, who arguably the most powerful tribe in northern Syria.

abuqahwa
Reply to  klove and light

Yes but what about the rest of Turkish occupied northern Syria ??

No way, Turks will go home.

When our borders secured from pkk’. pyg…and the rest. then negotiable which is at the moment Syrian Army are not capable doing that along

SAA will secure the border and will take care of the pkk crazies. It’s their country, not yours, and as you have chosen NATO, they have the right to choose who they want. As you know, they don’t want you, the Turks.

Saa can do jack shit since hafiz assd turkey been worning Syria to deal with pkk. hafiz did the opposite support it pkk. harbor Öcalan terrorist against Turkey go on tell us why?

I think is best we let SAA to tell you why. I think their explanation will be sufficient enough.

Waiting no prop . you seen nothing yet

not able to do it alone and what they do up to now? you need to face facts and not be bias about them.

same argument as tel aviv
the terrorists would not be there without turkish support.

Kurds are supplied by Turkey as well, wether you like it or not.

You created this mess, now step aside while we resolve it.

Super man. but no chemical use or barrel bombing

i sure hope, that Turkey invades SDF area now…….that would put an end to U.S Proxy rule in eastern syria and an end to any Russia-Saudi talks and Agreements concearing eastern syria………..then again…Turkey has to abolish all bases in Idlib and afrin and let SAA do their work, and finally come to an Agreement for eastern syria after SDF got buried and burned.and the war would be over.Turkey should realize now, that they are sitting in the same boat as Iran……….

as far as Russia is concearned….i dont trust them one Tiny bit……… it was Russia that made the Situation more complicated with their green light given to Turkey to invade syria in the first place, and it was Russia that made the bs Agreements with ALL jihadi Groups, once SAA and hezbollah got them cornered in, ie, douma,aleppo etc.. they got an Agreement to leave with their fucking families adn future headcoppers and light arms to Idlib.period.

I have Always tried to explain here, what the greater plan of OUR masters on this planet is, a plan i might add that has been written down hundreds of times and articulated by dozens of well known People all around the world… be it Edgar allen poe, George Orwell, Edmond de rothshild, trilateral commision,council on foreign Relations,John bnirch Society,Sir cecil rhodes,Sen. Rockefeller,Ulysses S. grant,H.G.Wells,Lionel George curtis, and dozens upon dozens others………. the main parties pushing for this is the british elite Crown and the khasarian jews(95% of all so called jews are khasarian- just to make u think.. pre world war 2 it was the other way round…….. 95% semites and 5% khasars)

A one world Government with Jerusalem as its capital under satanic Evil Leadership.

Please dont Forget, that in 1922, the britsh empire ruled over 458 Million People, thats one quarter of the Worlds Population at that time, and covering 33,700,000 km2, almost a quater of earths total land area.

this is not Fantasy…this is dead serious….These Folks are practically insane Evil…….they let their own Folks at home starve in poverty (USA,BRITAIN), while they constantly for decades invade and bomb the shit out of other nations…..with their Evil Partners.. call them zionists if u will, i call them jews..period, they believe in the Talmud… ” all non jews are GOJIM, all non jewsih women are WHORES”,

nobody will be able to stop this plan, unless the biggest secret and key to the whole khasarian/Zionist/jewish/ POWERBASE is solved……the HOLOCAUST. Only due to this big lie, was it possible to get the various nations on their side ……….just imagine ISRAEL never got created………..just imagine how many millions upon millions would be still Living………

the secret lies in the word itself.

most People tend to think that they know what this word means…a word still used today in main stream politics lol, NAZI.the Evil german .. Nothing could be further from the truth…..lol..

the word NAZI is the Name of THE PARTNERSHIP that changed the world………… a partnership between Hitlers Party(Maybe i should Mention that hitler has rothshild blood..from Salomon rothshild in Vienna,Austria) the NSDAP (thats hitlers Party) and here we go…. ZIONISM…,……. hence

only the jews played a game of doublecross………..

the deal is farely simple…… Germany must make life as misrabel as possible for the jews in europe, to get them leave europe for a desert area in the middle east with no infrastructure, no Friends, no water no Nothing practically. And jews in europe at that time pre WW2 were doing great, doctors,merchants,politicians etc… so unless u make them fear for their life, and make life totally unbearavble, not 1 jew out of a Million would leave europe for a desert area in the middle east.All the nonsense, with gas Chambers, are pure fabrication, and i might add, not eisenhower, not macarther and not patten wrote down 1 word About gas Chambers or any of that silly nonsense.

As far as the partbnership between Germans and zionists/jews goes….they go back to 1917 when Germany made its first deal with them concearning the russian empire under the zsar.It is today well known, inseveral history books, that the Germans let them jews/zionists under lenion,trotzky etc.. move through Germany in a sealed of Train with 20 Million Dollars in Gold into Russia…..the deal was the jews will kill the zsar and his entire Family , stop the war against Germany.Well, exactly this is what happend..in 15.12.1917 the agremment of Brest-Litowsk….the war in the east was over.And the jews just got their first Nation…during the first 20 years of reign by them jews/Zionist over 35 Million indigenous russians were murdered. And to this day… Russia has a jewish /Zionist at the top of the russian federal bank.

If a trust someone out there….yes, the iranians, hezbollah,houthis…….the russians and syrians….nope..not a bit…….please dont Forget, that assad was more than happy to help america in 2001,2002,2003,2004,2005,2006 in torchering american Prisoners from Afghanistan and elswhere in syrian jails….i sure hope he learned his lesson who he , not can, but should trust for his Survival and that of his families…….. as far as Russia is concearned….nope… lol… i dont trust Putin a Tiny bit… and his interactions with israel concearing syria…… mindboggling.. totally mindboggling…… Putin Needs 15 years to sell Iran the S-300,9 years to sell this old bs to syria and 1 week to do the same for Saudi Arabia and UAE..opps only they are getting the S-400 (S-300 is from the 1960´s)….

Putin made Russia say yes to the Evil sanctions against the houthis(sanctions that no weapons or material for weapon development is allowed to enter jemen) while at the same time selling state of the art weaponry to Saudi Arabia and uae………..

Actions Speak Louder Than Words. People say things and make promises they have no intention of keeping on a daily basis. You can tell someone you love him or her as many times as you want, but until your behavior coincides with that, the other person will probably not believe you. … Promises mean nothing without proof.