This map provides a general look at the security situation in Northern Sinai. Egyptian security forces and the army combat ISIS-linked militants in the area. 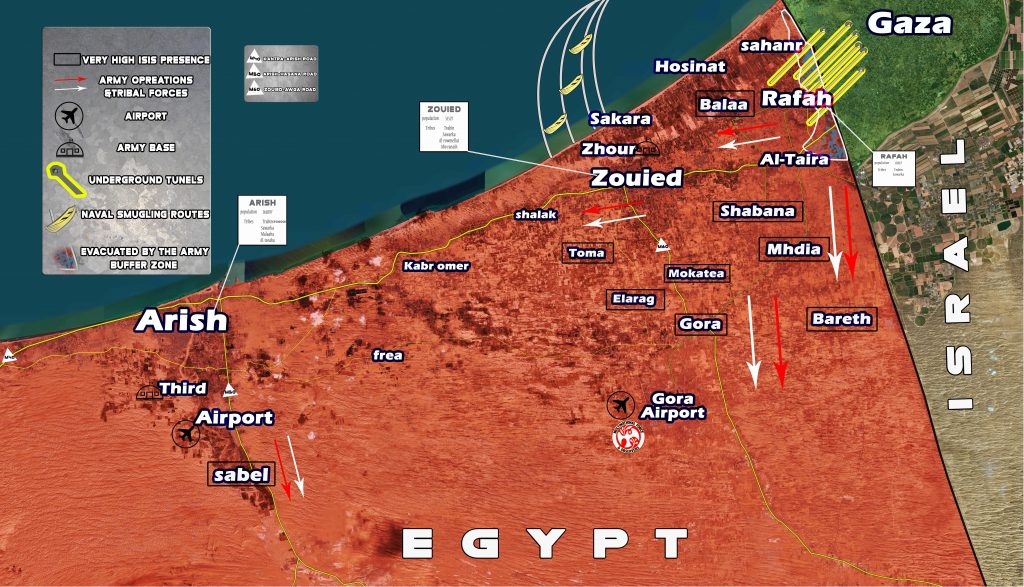 Egypt should know that- Israel and Netanyahu is supporting ISIS with arms, money and medic… Actually Israel is using ISIS to destroy Syria, Iraq and now Egypt. Open your eyes wide please…

It’s not accurate. Sunnis are helping israel to destroy their own countries. If the monkeys stop playing this game, nobody can destroy these countries.

It was US/Israel that created the Muslim Spring uprising that installed the Muslim Brotherhood in Egypt which then attacked and killed Christians and other groups as they burnt their homes and churches. Those who deny history are doomed to repeat it as the victim.

Yup, why even bother to debate anything, when we are feed the same bullshit day in day out, and again, this weird attacks on Palestinians, where they use the people smuggling routes

# an full f….. blockade for an fulll f….. decade and what happens, like NK the victim gets all the f….. blame, yeah, and then debate what, when SK have shown how rotten their new little petty American whore, but then again, Koreans are known for been whores aren’t you, just ask the Japs #

to state that this is the reason for ISIS to establish them self in Sinai, yeah, how conviniant isn’t it, 2 flies in one smack and everybody is happy, yeah, continue to watch an people die, and everything is against them, all based upon the rule of the master of the universe, the Jooos.

Egypt, well, I can smell the stench up here in the arctic zone, rotten corrupt souls, period, the same scums that fuels the ISIS war, witch we all know are scams, but highly usable to destabilize other country’s, or regions. I dont believe Egypt for an split second, I know they are scums, American cheep whores. What do you expect.

I have been into this for decades SF, dont f…. it all up with nonsense about Palestinians, an people whom I support 100%, from the bottom of my hart, and again, people dont realize how deep this goes, and why. Weird isnt it, if an Arabs writes about wiping out Israel, you all go bananas, but when an Joooo, drools about cleansing the land, you dont react, the MSM dont react, they never write this anyway, but attacks the victims of this, the Palestinians, my only line, the sole line in this days of “never ever fake news” witch that separates real men/women from the masses of ignorant degenerated shit heads, I have nothing by contempt to anyone whom refuses to see the truth. And Palestine shows the truth to us all.

Southfront simply does not care who you support a 100%. They do not care nor do they have to care. Don’t like it? Don’t watch it.

Game over. Sunnis are too stupids and too violent to understand a damn thing. Look at the map. These monkeys are being helped by israel. Just like in Syria, the “rebels” are entering and being helped from the frontiers.

Middle easterners are too corrupted and stupids. The only thing they will do is making their life worst and worst and after they will blame others whereas they are the ones that hold the gun and shoot.

You can do nothing with a corrupted people. Tha’s why most of them live in dictatorships.

Usually SF is somewhat accurate with the maps but whom ever did this one missed the early advances from Mehdia-Bareth area which is closer to Israel and they were known to have tunnels in that area so they could strike Egypt from that region. There was also a attack along the coastline with boats infiltrating that area.