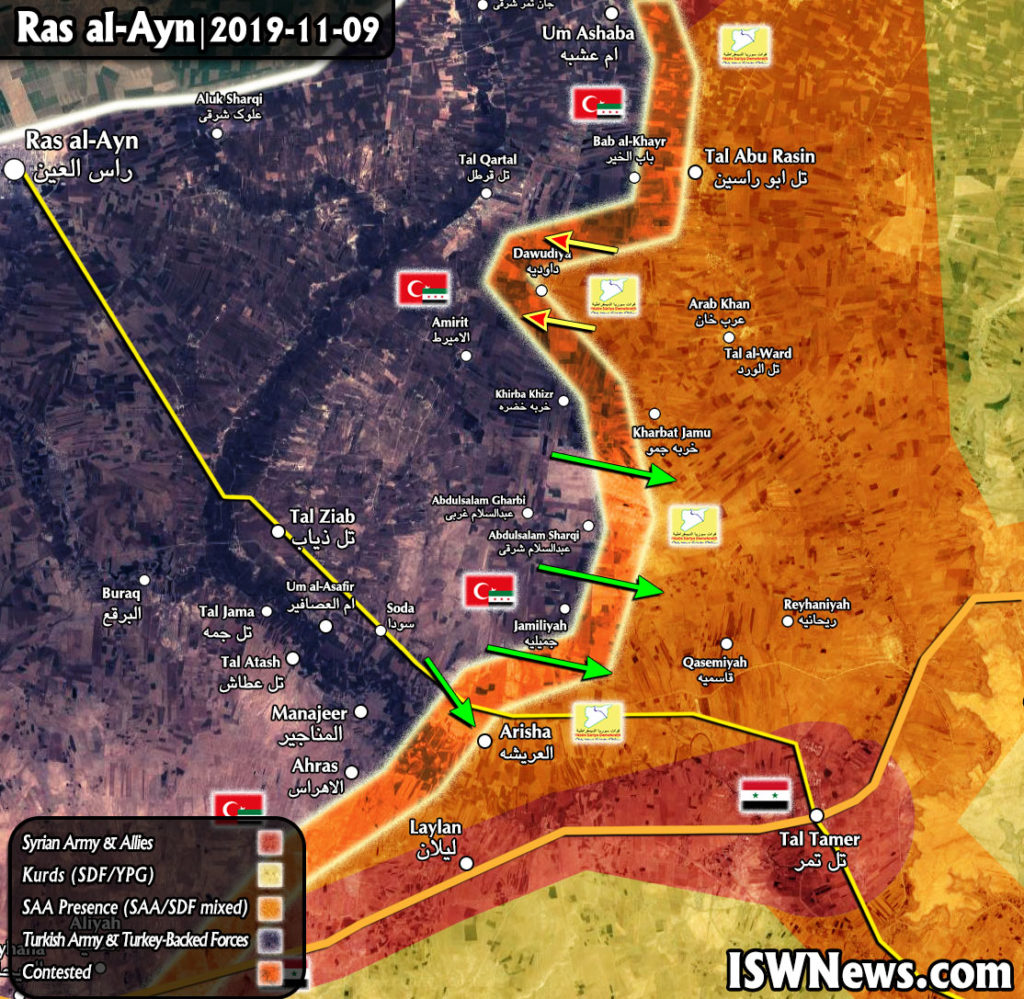 The area southeast of Ras al-Ayn remains the main point of tensions between Turkish-backed militant groups and the Kurdish-led Syrian Democratic Forces in northeastern Syria.

great Agreement by Zionist pig Putin…..working just as in Idlib…….”deescalation Zone” “ceasefires” ” broken from day 1 by Turkey and ist sunni Terror proxies…..and it is repeating again and again and again…..here at SF, just 2 days ago was a great article About the how many times one side(Turkey and proxies) VIOLATED the ceasefires and the “deescaltion Agreement” in OCTOBER only…… 600 times!!!!!!!!!

and Putin is still Blocking SAA Advance in Idlib although , as pointed out in SF article, the russian Military high command stated the 600 times Violation in the month of october only by Turkey and ist proxies!!

death to america death to Israel curse on the jews…….go houthis

Israel’s totally opposed to Erdogan and his invasion of northern Syria, so how do you reconcile the fact the Israelis don’t like Erdogan and want him to get out of Syria, but the Russians do like Erdogan tremendously and are now doing their very best to legally keep him in Syria. If Putin’s actually pandering to a Zionist agenda, why aren’t the Zionists agreeable to the Putin/Erdogan love fest, and the pilfering of more Syrian territory by Turkey. It seems the Zionists and the supposed Zionist supporter Putin are at odds over those matters, so I think Putin’s assistance to Erdogan has to be attributed to something else rather than the Zionist agenda. The Syrian civil uprising ended in June last year, that’s when the Arab League, the Israelis, the US, most of the EU, and a huge section of the Syrian opposition, all said Assad could remain in power, but Erdogan didn’t agree with that, he just kept the war going for his own selfish reasons, and because Putin’s so desperate to win him over to his own allied block of countries, Putin’s allowed him to get away with murder, over and over and over again. But I don’t believe for a second it’s due to a Zionist agenda, otherwise the Israelis and the Russians would have a common policy on the Turkish invasion of Syria, not opposing policies that want conflicting outcomes. The Israelis are guilty of a lot of things, and wanting Assad out of power and a new Syrian government was something they once wanted too, but they haven’t wanted that since June last year, now they want Assad to remain in power and they also want Erdogan out of Syria, so the new Zionist agenda is the complete opposite of what it was when the war first started, and it seems everyone other than Russia and Iran are on board with the new Zionist policy, the US, UN, EU, and the Arab league, all traditional Zionist supporters.

You neglect that Assad was, and still is, rejected by big parts of Syrian population what Erdogan ussed to support them and to invade and occupy Syria, he ussed and still usse ISlamic State as his executer. The US wanted to oust Assad because of geopolitic and miner humanitarian reasons, both ussed each other and certainly the US abussed the Kurds in their promises as always. In the end Syria needs to change and its people needs to have less corruption and more input in governement. The demands of the Kurds are no where excuberant, they do notclaim the revenue of the oilthey merely claim their part of it, al the rest is common I think the Kurds tried to make a decent deal but it was worse then joining the US again. Makes you matter how suppressing the Russian, Syrian Proposel/ directive to the Kurds was that they again perfer that of a traitor.