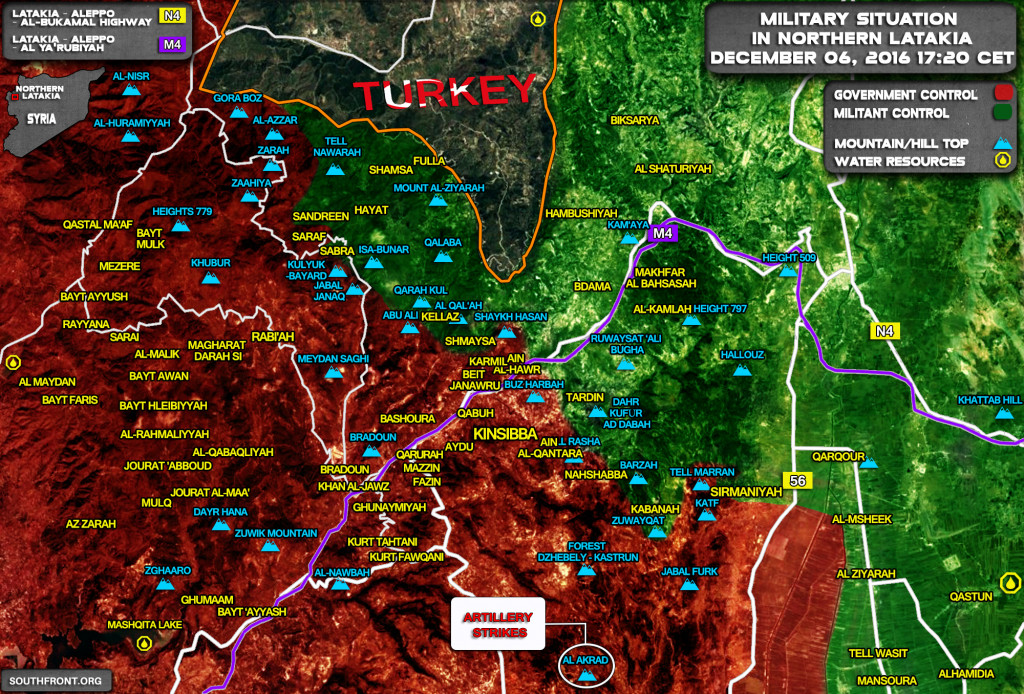 Clashes between the so-called “Free Idlib Army” and Syrian government forces took place in near the mountain of Akrad in the province of Latakia on December 6. The Free Idlib Army also shelled Syrian army positions in the area with rockets.

There are no confirmed reports about casualties of the sides.

1st Daraa. No one enemy left behind.

So… unchanged over past 6+ months. Great. They need to get a fucking move on, this whole area has been one big tease ever since the Salma, Kinsibba offensive way back last year!

It’s called strategy and containment. Push the head-choppers into low-value, rural terrain where they can do little damage. Force them to depend on and use inefficient back-roads supply lines from Turkey. Separate the enemy fighting units so they have to defend hundreds of rather isolated small villages with few roads and poor communication, giving them little opportunity to act in large, organized units. Ultimately, leave them the obvious option of retreating across the Turkish border when you have the time/forces and desire to clean out the Idlib kill box.

This was a superb strategy a year ago when Syrian forces were in shambles, Iranian reinforcements were just showing up in quantity and the Russians were trying to stabilize the situation. The lines are exactly where the Russian advisers wanted them to be for the last six months: minimum requirements for Syrian forces to hold, while tying up many of the enemy forces as possible and providing what looked like a safe area to all the other head-choppers.

Idlib was mostly al Nusra. It was a far better strategy to leave them until the end (containment) rather than crush Idlib up front, sending the fleeing rodents to scatter across the rest of Syria – like Aleppo. Instead, taking back Aleppo and Homs means many Syrian ex-FSA types (non-Nusra) negotiate to lay down their arms and stay. Foreigners and al-Nusra had no choice but to die or to crawl off to Idlib to live another day. Idlib won’t be an easy fight, but you’ll have nearly all the Syrian-allied forces involved. The hardest-core head-choppers will either escape to Turkey to be Erdogan’s problem, or will die in desperation trying to cling to their last bit of turf in Idlib.

Ar Raqqa and Deir EzZor’s day will come, and a substantial number of the Syrain forces will be involved – not just small, token expeditionary units.

So in your opinion, how many years before SAA takes back all the territory back? Looking at the chaos in Iraq that’s been going on for 13 years and counting (with no end in sight) it will be a while yet.