This map provides a general look at the military situation in Syria on September 28, 2018. 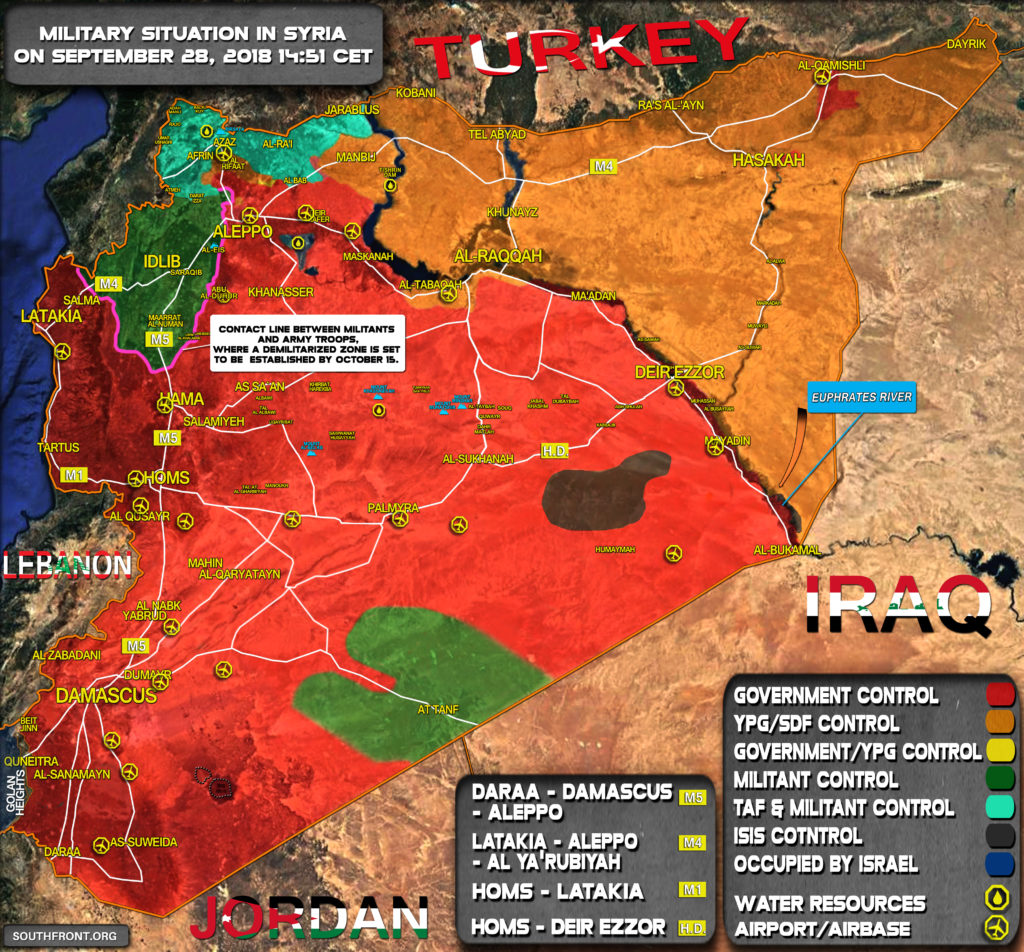 Enough now, if the civilians haven’t left by now… drop the Father or Son of all bombs.

Trump regime and his allies are chaos creators in the world. Their existence in this world is the destruction of common man.

Trump has serious problem in Washington and wants to divert the politicians focus towards issues which are not the US issues for example the US debt increasing like rocket high the US economy is on the verge of collapse but the Trump regime seems helpless in front of this important issue.

There is a risk of the war stalemating at this point. And the Jews winning a resounding victory as Syria is partitioned in compliance with the Yinon plan. And they can now move on to Iran, Turkey, Russia, Egypt and China to chop them up into little pieces also. Which is what their Jew world order hegemony plan is, riding their parasitical host war horse the US, so that goy die for Jews so that Jews don’t have to.

There is also a lot of momentum to prevent this from happening, such as the S-300 deployment. So that Jews die so that non Jews don’t. These types of circumstances are what has led to Jew persecution, expulsion, and genocide over and over again throughout history. The best solution to create a better Jew free future for humanity is to outlaw Judaism and close the synagogues and yeshivas so that they go extinct and there are no more Jews to bring tragedy to humanity.

At this point in the Syria war, the Jew world order proxies have been almost entirely rolled up, and the Syrian government coalition is up against state actors. Primarily the US, Israel and Turkey. Turkey is fence sitting with a foot in both camps. As a NATO member and blocking force against Syrian government expansion in Idlib. The Turks are offering to help clean up the mess that they were a big part of creating. And if that happens and they turn over Idlib in stages to the Syrian government as it is cleared of regime change terrorists with less death and destruction than if the Syrians had to do it themselves, that will be a good thing.

The Turks are also potentially big players in what happens in the rest of the NE of Syria. A lot will depend on continuing to expand the no fly zone over the NE, the Al-Tanf area, and over the sea and Lebanon. Which will have a big effect on moving the front lines forward on the ground. Expanding and upgrading the Syrian Air Force, so that the Russians don’t have to do this work themselves would be a good idea. A good place to start would be engaging the IAF with both SAMs and manned aircraft. Watching Jews die so that Syrians don’t is going to have a sobering effect on the US military.

As they watch US manufactured aircraft being defeated in the skys over and around Syria. Just like they were in Vietnam. Dropping a few F-16s into downtown Tel Aviv would also be a wake up call to Israelis that their 70 year reign of terror in the middle east is coming to an end.

Jew pedophile mass rape cult and criminal organization centers that need to be closed and demolished:

As a result, several groups have been made into recognized criminal organizations. … typically after a cult group has been involved with a criminal enterprise. These cults have generally been involved with activities like murder, abduction, statutory rape, or other serious crimes. Often, they hold an illegal activity to be a primary focus of their religious teachings, making adherence to the group’s beliefs a virtual guarantee of grossly illegal activity directly harming others.”

Click on the image to read about how Jews covered up their roll in 911:

This is the text:

“Immediately following the 11 September attacks, the Zionist network was methodically maneuvering behind the scenes to quash any legitimate investigation that might reveal what really happened that day. They made it their goal to control any and all angles of so called “investigation” so that they could quickly cover up any and all evidence pointing to Zionist involvement

Alvin K. Hellerstein – a judge for the U.S. District Court for the Southern District of New York and has been involved in several high-profile 9/11 related cases including consolidated master case against three airlines, ICTS International NV and Pinkerton’s airport security firms, the World Trade Center owners, and Boeing Co., the aircraft manufacturer. Hellerstein is a dedicated Zionist and Israeli nationalist who has ties to the Jewish mafia dating back to 1956. Hellerstein’s wife is a former senior officer & current treasurer of AMIT. From its website it states: “Founded in 1925, AMIT is the world’s leading supporter of religious Zionist education and social services for Israel’s children and youth, nurturing and educating Israeli children to become productive, contributing members of society.”

Michael B. Mukasey – This Orthodox Jewish judge oversaw the litigation between Larry Silverstein and insurance companies after 9/11. Silverstein was awarded billions. Mukasey prevented full inquiry into the Five Dancing Israelis incident who were arrested in connection with 9/11. He played a role in their release. He was later appointed attorney general by President Bush. He defended the patriot act, and he supports torture policies.

Michael Chertoff – In charge of the Criminal Division in the Justice Department on 9/11. Essentially responsible for the 9/11 NON-investigation. He let hundreds of Israeli spies who were arrested prior to and on 9/11 go back home to Israel. He was also a prosecuting judge in the first terrorist attack on the WTC in 1993. Chertoff purportedly holds dual citizenship with the US and Israel. His family is one of the founding families of the state of Israel and his mother was one of the first ever agents of the Mossad, Israel’s spy agency. His father and uncle are ordained rabbis and teachers of the Talmud.

Kenneth Feinberg – set up the victim’s compensation fund ($7 billion); controlled by a Zionist cabal, it managed to get 97% of the victims’ families to take money in exchange for dropping demands a legal investigation of 9/11.

Sheila Birnbaum – Another key Zionist involved in the cover-up of 9/11 is Sheila Birnbaum of Skaddan, Arps law firm. Birnbaum was appointed ‘special mediator’ of the legal suits filed by the 3% of families who decided not to be bought off. Nothing of significance has happened with these claims since.

Benjamin Chertoff – (cousin of Michael Chertoff) – Ben wrote the 9/11 hit piece in Popular Mechanics claiming to “debunk 9/11 conspiracy theories”. His use of ridiculous straw-man arguments largely discredits the piece though it is still widely quoted by defenders of ‘the official narrative’. He claims his relation to Michael Chertoff is “distant” but Chris Bollyn proves otherwise.

Stephen Cauffman – Leader of NIST investigations which in total amount to a systematic coverup of the WTC 7 collapse. The NIST position remains that fire, together with minor damage caused by ‘ejected debris’ from the collapse of the North Tower situated a block away with WTC building 8 in between, brought down WTC building 7.

Philip Zelikow (Dual Citizen US / Israel) – 9/11 Commission Gatekeeper Zelikow was appointed the executive director of the 9/11 commission – the most powerful position of the committee. This Zionist Jew is responsible for concocting the contrived fiction that was presented as the 9/11 Commission Report – official narrative. The report contains hundreds of glaring anomalies, contradictions, omissions and downright falsehoods. It even manages to omit any reference at all to the collapse of Building 7 at 5:20 pm.

Initially Henry Kissinger was appointed as executive director but surrendered the post after enormous protest. This paved the way for Zionist operative Zelikow to take the helm. Zelikow has numerous conflicts of interest that clearly inhibited his ability to tell the truth to the American people about the 9/11 terror attacks.

Zelikow was a Bush Admin insider, having been on the transition team in early 2000. In 1989-91 Zelikow worked with Condoleezza Rice on the National Security Council for the George H. W. Bush Administration. In 1995, Zelikow and Rice wrote a book together. From 1996-98 Zelikow is director of the Aspen Strategy Group which also included people such as Condoleezza Rice, Dick Cheney and Paul Wolfowitz as fellow members. After George W. Bush took office, Zelikow was named to a position on the President’s Foreign Intelligence Advisory Board [PFIAB], and worked on other Administration task forces and commissions. Zelikow position on the Commission made him its ‘Gatekeeper” enabling him to decide which topics would or would not be investigated. He was also secretly in contact with one of Bush’s close advisors – Karl Rove – throughout the gestation of the Commission Report.”

All this is very true… Christopher Bollyn has covered a lot of these findings as well in his exposes on the reality of how the Jews absolutely did 9-11….

Sadly, most of these bastards listed are now retired, or are living in their cherished hell hole called Israel…. And the 3000 victims of the Jewish atrocity, along with their families, will never find peace due to Jew control over America!

My take is that Turkey(essentially Erdogan only) is trying to repeat scenario how they stole Hatay from Syria: fill it up with turds and than call for a local election so the turds decide whether to stay in Syria or join Turkey

The DMZ agreement has very short deadlines that won’t allow for that type of thing. If they’re met, which is unlikely, 1/3rd of Idlib will be cleared of the worst regime change terrorists immediately, and all will be gone by years end and the main roads through Idlib to the rest of Syria will be open. Syrians aren’t going to tolerate an ethnic cleansing land grab under those circumstances.

If the deadlines aren’t met. The SAA will resume clearing operations and Turks aren’t going to migrate to an active war zone.

Hi RichardD, after 3 months and no action in Idlib thus far, are you willing to at least consider my proposal of future development in Idlib?