This map provides a general look at the military situation in Syria on April 5, 2018. In early April, government forces launched a security operation against ISIS cells oeprating in the desert area south of the city of Deir Ezzor. Since then, the Syrian Arab Army, the National Defense Forces and their allies have captured a large number of weapons and secured a notable area there. 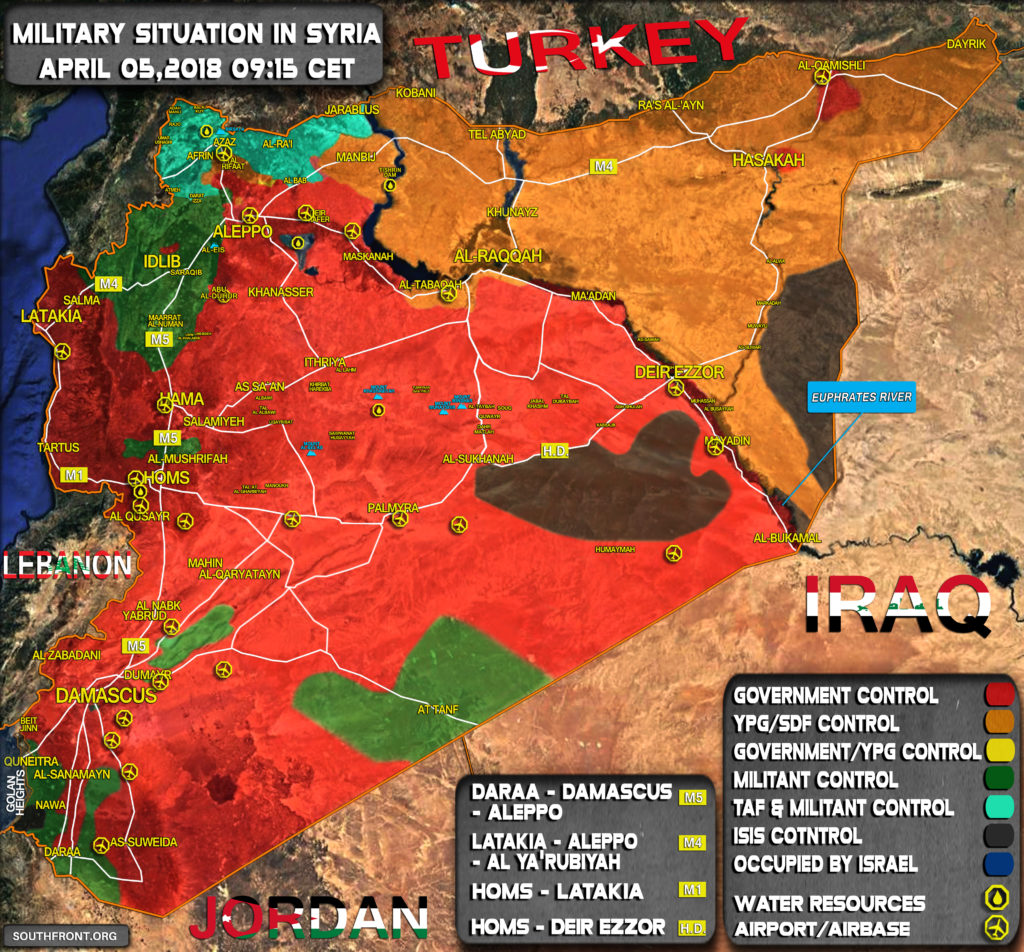 that spot of government in Idlib ; how?

The time is against Syria and it begins to form a de facto fact that Syria now is divided in 3 and only one is under the control of the legal government of Syria. The rest are controlled between them 2/3 of Syria and both of the occupying armies are hostile to Syria and are the ones who attacked her.

And their way of delaying finishing what they should finish while the iron is hot and give their attention to their occupied land, is against them. I see a similar situation established as the beginning of the problem in Cyprus. Where three warrant-or countries had the right to invade her at will sort of to speak.

What also does not make sense is sending the isis to Turkish occupied areas.

Looks good, the Syrian government coalition is doing a great job and progressing on all fronts. That desert pocket south of the highway looks like it may be in the process of having a section partitioned off closest to Dier Ezzor.

Roll on SAA, roll on to complete victory over the evil Jews and their collaborators!

goutha is always green on the map ?

Slowly but surely the country and its people are being liberated,time is on their side,and eventually the zionist terrorists will have to leave or be driven out.

Eventually yes but unfortunately the game is now and To my opinion Syria already lost her sovereign rights with what is been decided with out her. Now she has custodians. Let us see where this get them. But i am worry on the long run is not for the good of Syria what is happening now.

That depends very much of USA-Israel willing. They are the main supporter of terrorism in Syria, and they are capable to bringing it back to alive again. The partition of Syria looks very likely so far, but let us wait until Syria-Russia give the last word.

ISIS, YPG & FSA can’t be driven out or again. Where would [What would you do?] the push be? Iraq will not take ’em back & Turkey doesn’t want ’em either. The U.S already drove ISIS out of Iraq; that is where the U.S swept to. That ‘is’ ISIS’ western insurgency & retreat – close to Iraq & fall back, to the north. Classic. ISIS thinks, they are being smart but the map shows that, rebel army pockets have been pincered. That’s exactly what it looks like, when defeating a force & before termination.

They are not mixing in public, not to pick hits and suicide bomb later. That’s where the 0% muslim population order enters for countries.

The Turkish Press Agency, Anadolu Agency, has published a map of five secret military bases in Syria belonging to France (see above part of this map pinpointing with the French flag four of these bases). One of these bases is the cement factory of the transnational group, Lafarge-Holcim, which is currently under a French judicial inquiry for financing terrorist groups.

The Agency specifically states that the first RPIMa (the Parachutist Regiment of the Navy’s Infantry) is deployed on Syrian soil. Furthermore, an additional 30 French soldiers are already in Raqqa and 70 at other sites in Syria.

Under international law, France’s military presence in Syria is illegal.

This publication of this information by the Turkish Agency constitutes a warning to France which has recently announced its support for terrorists belonging to the YPG, a Kurdish organization that is pro-US.

Those are terrorist pockets. There is only one recognized government in Syria, the Syrian government. The others are not recognized.