This map provides a general look at the military situation in southern Syria. Government forces are currently working to secure the Yarmouk refugee camp area in southern Damascus and the Eastern Qalamoun region.

Militants in Eastern Qalamoun have already accepted a reconciliation agreement. So, this pocket will be soon eliminated.

Another issue is the Yarmouk refugee camp, controlled by ISIS. Clashes are now ongoing there. 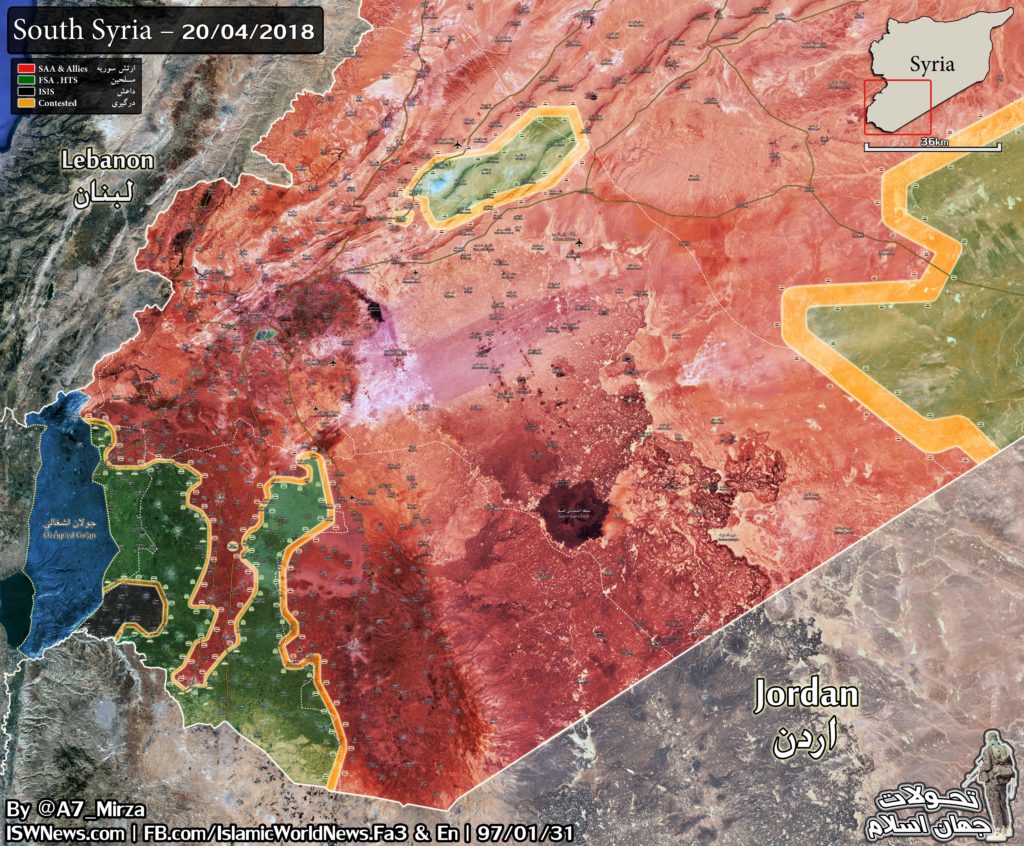 Great map ! It’ll be good to have that ISIS pocket at Yarmouk cleaned out, too close to Damascus.

Yes indeed, more red around Damascus every week. GOOD TO SEE THIS :)

The Golan Heights, taken from Syria in 1973, why is the argument of Israel for its occupation???

The Palestinian land Israel have taken by force and Golan hights Israel want in charity. Israel will survive as long as Saudis present in this world.

Saudis wahhabis are, worst pest World have evere encountered ever since.

We took it, therefore its ours. Or also might makes right. Unless somebody does it to us, then we’re going to whine about terrorism.

Is that the argument???

Your complaint is anti-semitic.

Let’s be honest it’s anti Judaic which is a religion and Jews of Israel are 90% European have never met any Semites in that part of the world.

You expected logic or a coherent argument? Sorry to disappoint you. ;-)

Israel has always needed US/UK/France to aid and abet their thefts for decades in the Middle East, they started the 6 day war by attacking nations there and had the US help in the theft by killing their own people on the USS Liberty. While trying to start a Nuclear War just shows how sick the caner has been in the US.

Bigger guns and the US connexion.

Alright, lets get it on! Go boys!

NE Syria next.gonna be great seeing what Trump will do. Then we will get our second look at whether he really wants peace. He is already GUILTY of an illegal attack.

Didnt he say during his campaign he was going to work within INT LAW?