The Syrian Arab Army, the Tiger Forces and other pro-government factions are developing their advance against militants in the district of Lajat in northeastern Daraa.

So far, government forces have employed a limited force to attack militants’ positions. However, if a large-scale advance launched, the Lajat district will be isolated and cleared from militants within a few days. MORE DETAILS 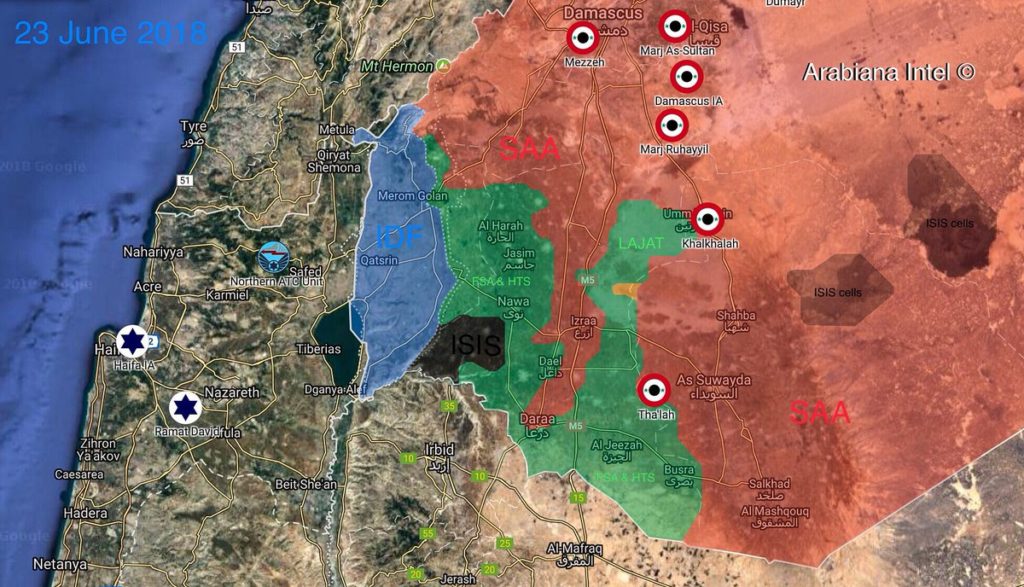 Seems Russia is giving the US a big FUCK YOU! hahaha … https://www.almasdarnews.com/article/breaking-russia-officially-enters-southwest-syria-offensive-despite-us-warnings/ … better late than never . Anyone for BBQ’ed jihadists tonight for dinner?

Yes indeed. This Russia had to do and all my prayers go out to the Russian, Syrian, Hezbollah and other forces backing Assad.

Nice feint by the Russians. Will the empire of chaos now do something stupid?

Well the agreement never did cover terrorists, so Russia is doing what it has always done, it’s killing Americas terrorist army.

Yes, taking the Golan Heights first would also cut off a supply source for the Jihadist. :D

Yeah, but we should not be carried away and learn to walk before we jump. Attacking IDF directly will give Syria nothing good at this point in time. One step, than another one. Look how steadily and methodically Syrian government is liberating its country starting from 2014 (with a little help from Russia and friends) – let them keep it that way. BTW, westerners do not actually realize how little blood was spilled by Assad in comparison with Mosul and Raqqa. Look at Aleppo and look at Raqqa now – world is noticing the difference.

Unfortunately the above comments gave me a “feel good factor”, but I am with you on this one. I would leave the Golan heights until the last terrorist is kicked out or moved out by US chopper.

And if the Native Americans had reconquered their lands from the British colonialists, we’d have a better chance of avoiding the Iraq war in 2003.

Cool story bro, thanks for letting us know.

Totally different, Israel has little power itself, it relies on the USA for muscle. The US economy is in the process of collapsing, and all that muscle might just disappear. Without the US, Israel might negotiate, or all the Israelis might just go back to where they came from.

Incredibly naive and optimistic. Even with a major recession and with limited US help, the Syrians have very little chance of launching a successful offensive war to recover territory from 50 years ago. It just isn’t going to happen. It is absolutely guaranteed that this is not part of Assad’s plan. 100% guaranteed this will not happen.

Syrians and Hezbollah can hold their own ground and inflict heavy casualties on invading ground troops of the IDF, much like any well trained guerilla insurgency, but going on the offensive to the Golan Heights is an entirely different story. I understand some of the sentiment and bravado coming from those that support the SAA and Hezbollah, but the reality is this sort of crap just isn’t going to happen in the lifetime of anyone alive today. There is absolutely no plans by the Syrian army or its allies to retake the Golan Heights in the context of the ongoing civil war.

A limited force… of Tigers. And they brought T-90s to the party.

Uh, South Front. I’d hate to open up a can of worms but you can’t keep pretending that the Golan is on Assad’s agenda. I guarantee he’ll settle for the post-1967 border not because of any ideological affiliations but because of practicality.

Can you actually read an article or register a map reference? The article specifically reports on SAA related actions against militants in Lajat – an area way out west of the Golan Heights. You’re getting kinda desperate with your SF hostility program.

I don’t think Southfront is pretending that the Golan heights are on Assad’s agenda. I think you correct, but it’s still nevertheless more accurate to label the Area as “Israeli Occupied” Golan Heights, as the Syrian claims still stand, regardless of how unrealistic it may be for Syria to recover them by military force.

Yes, and practicality says that there’s no point doing that because Israel is doomed by its own masters anyway. First reformatting of US (already ongoing) than Israels fate is known. This is why Bibi was marching along Putin within Immortal Regiment on May 9th. He was looking around visibly terrified of all those people that he actually hates. Over million of people carrying photographs of their fathers and gran fathers that fought and many died for Russia. He hopes that Russia will again save their sorry ass from oven like it happened in 1940s. I would not be so sure this time around.

Success in this area is elusive. The militants can easily retreat to jordan, and then attack again. This is going to require a large permanently deployed miltary presence. I would have preferred to see the isis pocket eliminated before this started.

The zionist puppets in Jordan need to wake up and either reverse their agenda of supporting zionists or the people will do it for them.Zionism must be eradicated if real peace is to become a realitySyria will be free in spite of traitors like them.