On Satuday, Syrian government forces captured Zuluf and the Zuluf dam area in the eastern countryside of Suweida. On Sunday, government troops continued their advane in the area aiming to take control of Kharbat Mutayta, Kharbat Nafel and Kharbat Ruhba. If this is done, a large number of small villages northeast of Suweida will rapidly fall into hands of the Syrian military.

Meanwhile, reports appeared that Russia may deploy the special operations forces in order to support the government advance in southern Syria. You could remove the ?x49697 after .jpg from the image link

Can someone explain me what’s this?
I thought the whole Lebanon/Syria border was free. 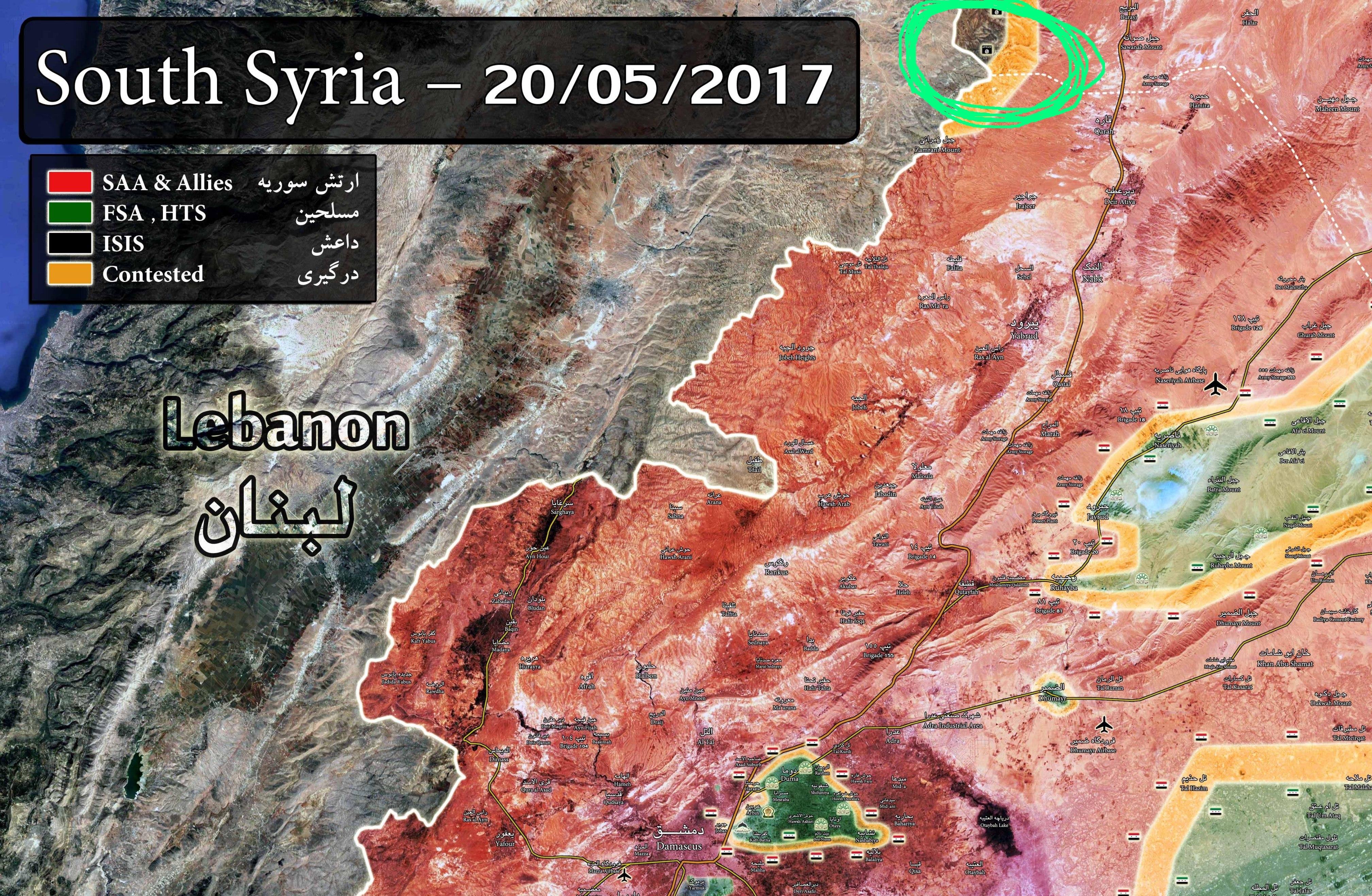 That would be an ISIS and co pocket that Hezbollah has reportedly moved forces to clear since the section west of Damascus was cleared. Not all the reports of the border successes were clear on this matter, hence this confusion.

That is inside of Lebanon proper, there is a small Daesh insurgency in the mountains

The area looks like hilly badlands, check out the volcano.
SAA can keep on driving east on the road and the red area will keep expanding.
Not much out there, but they will hold the road.
And it look’s good on the maps! :)

Ha yeah was looking at that myself “Volcano field” wondering how long ago it was active, hopefully wont be long untill the border with Jordan to iraq is secure and the SAA can begin working with the Iraqis/PMU directly and clear the border on either side up to Abu Kamal and the Euphrates valley.

The terrain from Zaza junction to at-Tanf facility is generally very flat, open, sandy desert with a regional gentle slope west to east and wadis draining into salt pans such as just east of the at-Tanf facilty . Remnant lava fields are flat with minor isolated volcanic hillocks. The only volcanic peak of significance is eastside al-Suwayda, Tal al-Jaynah.

IFFighter: The Lebanon – Syria border is free , on this map it starts at the blue spot to the north (the blue spot are the occupied Golan heights)

The US is desperate to keep Iraq and Syria seperated, knowing if the Baghdad-Damascus highway us relinked, the Iraqi PMU will show up.

What’s happening in Syria and Iraq is happening in Pakistan and Afghanistan. If one country is in turmoil, the other will have to deal with cross-border attacks and economic stagnation for it. The fate of Iraq and Syria are connected, and eveyone should know it.

True. And it’s not only a link between Syria and Iraq, but a link of the Shiite axis Hezbollah-Damascus-Baghdad-Tehran. Assad surprised me with that move to capture the border with Iraq because i thought the first objective was to break the siege on Deir Ezzor and then move to Iraq border along the Euphrates. I think that the “agreement” with Turkey and the FSA move to Deir Ezzor changed their plans.

Der Ezzor would lose it’s significance if US proxy capture both Al Tanf and Abu Kamal border crossings – and by the look of things that’s just what US was aiming to do. Mind you Abu Kamal is the real prize because it is deep within Syria and Iraq and not easily accessible to US/Israeli air strikes. Any future assistance and reinforcements would likely come through there. Having said that – US needs to take only the crossings and create a buffer, while SAA needs to control crossings, roads and important towns in between. US still has te option of using the Kurds and strike towards Der Ezzor from the North on the pretext of fighting ISIL.

Yyyeeeesssss.. The World is with you Syrians..Fuck the US backed terrorism,I,myself never going to Respect the US as a Democratic Country they are the biggest motherfucking terrorist organization on this Planet..