This map proides a general look at the military situation in the Palmyra-Deir Ezzor-Raqqah triangle. Government forces are seek to capture it and to lift the ISIS siege from the government-held city of Deir Ezzor. 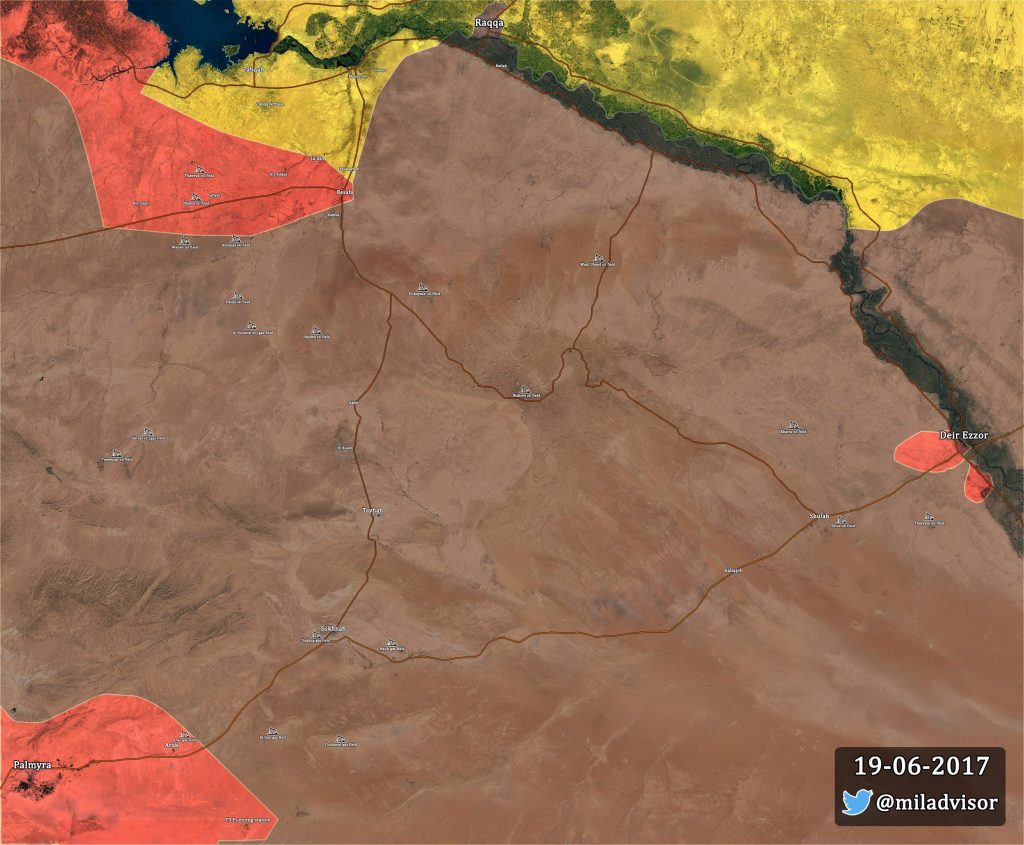 Would be good to see if SAA would keep hugging the SDF lines to stop them carving up more of Syria or take the direct route to DeZ. It is clear that the Palmyra front is much harder as ISIS had more time to set up defences…matter of time.

“SDF” already is hugged through taking the Resafa junction. Reinforcement troops just came in from Quneitra to stay and secure the rear front against kurdish ambitions. So the Tiger can go on to reach Deir Ezzor and liberate the comrades there. Suheil will meet Issam…

Yes, I get that. What I was implying to was along the Euphrates, south of Raqqa. No matter what way they approach, Dez will be liberated, SAA and PMU can have 5 fronts at once towards Dez if they like.

When SDF takes this way they a) sooner or later will meet the last ISIS contigents at the eastern side of the Euphrate river and b) they would take a much longer way than SAA/Tigers, only to meet them in Deir Ezzor city again. All depends on what the US scum has on the agenda.

dont woryy when isis is gone the SAA and PMU move against the SDF!

I understand Russia has few attack Helicopters in Syria,….limited number of strike Aircraft. Syria may be down to less than 45 attack Helicopters combination classes. Airpower can strike ISUS allong the Frontier towards Deir Ezzor,….just roam the Barrens And Lizard Plink. Eventually the contacts reveal where ISUS is weak or not operating… It affords an opportunity to leap frog the rats and catch them in Cauldron where they run and die trying. ISUS still must be getting US sat coverage and designates to know where SAA forces will Move up to next,… SAA keep rolling into these awaiting ATGM killing sprees. SAA need to change operations doctrine.

Someone had been giving Isis satellite recon information on SAA since the beginning of Isis.

If Qatar is right, that entity would be Saudi Arabia. But many entities are connected with Isis to an extant, including Qatar. However Qatar’s contention is the Saudis founded Isis.

ISIS was created by the US as a Sunni backed and funded group , bet you wondered what happened to the Baathist army of Iraq . The Sat recon comes via the US operation forces embedded in ISIS so this is being provided by the Pedantagon directly . They still have their embedded units in ISIS operating in that region getting covert drop supplies whenever the US is jamming signals in the region . The Russians need to keep those spy planes out of range and counter these drops with attacks , once they are in the ground .

Adorable little conspiracy theories you have there. Have any more of them to confirm for us the status of your true knowledge of events in Syria?

Wow !,a triggered DC troll how come you have lot less knowledge than most do think someone like you would be better informed .This stuff was made available by the US , for public viewing .

It is well known that the leading Sunni Islamists at head of ISIS where detained in Adu Ghraib prison during post Iraq war sectarian insurgency, including ‘leader’ Abu Al Bahgdadi – a pseudonym of course. The US sacked whole Baathist Iraqi military staff in 2003 – many officers deeply disgruntled and unemployed and joined in coalition with Islamists bringing their staff officer military training into nascent ISIS. These were all Iraqi’s with some links to US military intelligence in some form. The conflict in Syria saw immediate western and GCC sponsorship for motley Islamist factions – the largest of which were always sectarian and created out of rural Muslim Brotherhood – for example, Aleppo never ‘rose up’ as in western political narrative, it was invaded by rural Islamists from north provinces. Simultaneously, a large number of Islamists and mercenaries were recruited, transited, and trained in southern Turkish base camps in aftermath of Libyan war in 2012 – shipped in from Libya, Tunisia, Morocco and large quantities of looted Libyan state arsenal small arms were transited with them. These Islamists and mercenaries were under direct control room comprised of NATO and GCC military and intelligence officers in southern Turkey. Incidentally, an authoritarian state like Turkey simply does not let waves of foreign Islamists and mercenaries inside its borders, for military training and operations, without strict controls, NATO oversight and contingencies to ensure they do not destroy the host. ISIS an Iraqi Al Queada off-shoot joined in the Syrian conflict, but had little initial success in Syria against the SAA. Hence why in frustration ISIS leadership changed strategy, turned and attacked Iraq. As the ex Iraqi army officers in charge of ISIS strategy well knew exactly where to go in Iraq for military depots full of serious US bought heavy weaponry. ISIS then drove all that looted weaponry across whole of western Iraq, under US noses, and into Syria where they then commenced to have serious impact and start occupying large swathes of territory. This we know. As for conspiracy theories – they are not really needed. US renowned investigative journalist Seymour Hersh uncovered the supply rat-lines of Islamists, mercenaries, and Libyan, Croatian and other sourced weapons being poured into Syria by NATO and GCC throughout 2012 and beyond. Those supplies have not abated – CIA and Saudi intermediaries buy huge shipments from Bulgarian state arsenals every month that are shipped to KSA and flown to Turkey for distribution to militant factions in Syria. It takes a whole lot of money and munitions – every month – to fight a state national army for six years straight on multiple fronts. As for the links between the players – it is just a matter of time before a larger picture becomes clearer to those interested. Presumably ISIS leadership will dissolve and never be held accountable. But it is remarkable that ISIS achieved exactly what the formal NATO and GCC proxies singularly couldn’t, and occupied large territories inside of Syria. Even more remarkable those territories complied with the exact desired US plans, to both, partition off a whole eastern Syrian land corridor from Jordna to Turkey and to isolate Syria from any Iraqi land based support. Whilst further, creating the entire reason and political rationale for US military to even intervene in distant Syrian conflict at all – under rubric of ‘fighting ISIS’ – would you contest any of this?

Is there a deal that if the SAA reaches the Euphrates before the SDF takes Raqqa they can keep everything on the east bank? Means the SDF will withdraw from Tabqa.. Was the shoot down someone in the Pentagon not liking this deal?