Forces of the Libyan National Army (LNA) led by Field Marshal Khalifa Haftar are developing their advance on the city of Tripoli, which is controlled by the Western-backed Government of National Accord (GNA). Currently clashes  between the LNA and pro-GNA forces are ongoing in the area of Khallet Furjah.

If the LNA captures Khallet Furjah and the nearby town of Ain Zara, it will be able to lay siege of the GNA-controlled Libyan capital. Both sides understand the importance of this situation and employ various weapons, military equipment and even the small number of warplanes, which they have. Dear SF, would you be so kind as to write a short article on what you guys believe the situation is behind the scenes, regards allies, funding etc..

Very briefly – Haftar was Gaddafi’s Right hand man, later fell out over a botched military operation. He had to escape the country and in 90s ended up in Langley, Virginia. Some say he’s a CIA puppet, but it isn’t certain. My take is, he doesn’t act like one, but I reserve a small suspicion in case he turns his coat later on.

abuqahwa
Reply to  You can call me Al

Actually it’s not that complicated. After 2011 Haftar took the opportunity to return and build up a military/political power base to oppose the radical Islamic gangs then rampaging acroos Libya, courtesy of the NATO aggression. None of these disparate tribal/religious groups could ever cohere to form a credible government/administration so the UN intervened (read GB/France/USA) and imposed their man, Sarraj, to form the falsely named Government of National Accord GNA., thus forcing the legimate National Assembly to flee to Tobruk where it still is. Meantime Hafter formed the Libyan National Army and slowly battled and destroyed the Islamic radicals in Benghazi, and later Derna, thus controlling all of eastern Libya, including the oilfields of the Sirte Basin. The GNA barely control central Tripoli and is hostage to multiple militia, some just localized gangs, other with pan-Islamic ideology like the Muslim Brotherhood – this explains why Egypt backs LNA, Turkey backs GNA. The strongest formed and organized forces opposing the LNA are the Misrata formations – these operate hand-in-glove with their Western sponsors who are ready and willing to assist from their forward bases at the port. Whatever his past, Haftar is no CIA stooge now, witness the panic of the US/UN seeing their puppet losing ground.

“…After 2011 Haftar took the opportunity to return and build up a military/political power base to oppose the radical Islamic gangs then rampaging acroos Libya, courtesy of the NATO aggression…”

Agree, but the complicated part (at least to many in the west) is selective, opportunistic foreign backing. In an overly-broad sense, head-chopper militias are either Muslim Brotherhood (Turkey, Qatar) affiliated or Wahhabi/al Qaeda/ISIS (Saudi Arabia, UAE). FUKUS falsely labels either one at different times as ‘good’ or ‘bad’ depending on what FUKUS is trying to steal at the moment.

In reality, nobody – Muslim or not – really wants ANY flavor of radical jihadi head-choppers running around their country or controlling any territory. Libya is no exception – Haftar wants them eliminated. Since FUKUS is still backing the GNA, Haftar and the LNA are ‘the enemy’. The MB head-choppers are all we (the US) has left as effective opposition forces squeezed into Misrata, but the US would have just as well supported al Qaeda/ISIS head-chopper militias against Haftar. We supported both of them in 2011 to regime-change Ghadaffi. We’re evil like that. When they’re no longer useful for fighting imagined ‘enemies’, then we call them terrorists and invade to ‘liberate the people’.

More confusion for Western onlookers: France supports Haftar this time (oil) – there is a French SF unit embedded in the LNA. The UK and US are pissed that France is ‘not on their side’ = opposing Haftar/supporting GNA. In other words, the UK and US bribed the wrong side.

Yes I agree, but others do not, hence my request from SF.

Smokescreens….the Common thread will be clear once the Smoke has disappeared… Everyone opposing the AngloZioNazis is on the “Good side”….any Disagreement can & should be solved later….

Yes that is my stance as well. But then I get hit by Hafter is CIA.

Way too early to talk of laying siege to Sarraj UN puppet, as yet the main forces controlled or allied to the Misrata command have not been engaged. Until the LNA control the Second Ring road and cut the coastal highway at Tajura, the so-called GNA will hold out – Mitiga airport remains operational and reinforcements are coming from Misrata, where GB, France, USA, Italy have substantial presence. Remember Misrata port was, and still is, the prefered supply route for Western arms shipments to the various militia gangs in Tripoli. Talk of a “bloodbath”or “siege” in Tripoli is just the excuse NATO needs to wipe out LNA forces in the open. Remember the ridiculous “Bloodbath in Benghazi” gave the French the green light to destroy a Libyan Army loyalist mixed armor/mech brigade about to re-enter the city . When we see heavy earth-moving equipment digging trenches and building berms across the main lines of approach (Airport , Gharian – from Suani bin Adem,Qasr bin Ghashir northwards then things are getting serious. Meantime the lines of contact stretch from Janzur in the west to well south of Ain Zara and Tajura . At no point is the main supply route MISRATA-MITIGATA under any threat.

A LNA Mig-21 ‘bombed’ Mitiga Airport, but looks like it was just a couple of 55mm S-5 rockets as a ‘message’ – maybe retaliation for last night’s GNA strike. LNA declared a no-fly zone over western Libya for all military aircraft, but excludes civilian ops. Mitiga is now closed by some accounts, but others say it’s not. They do run military traffic out of the same airport, so maybe that’s who got the ‘message’. Western anti-Haftar hasbara reporting “while civilians waiting for flights,” but the bombing was nowhere near the civilian terminal. Also reported as “Libya’s only operational airport” but that’s not accurate – flights still land at Tripoli and plenty of other airports. Mitiga is the only officially operational international airport with scheduled traffic. Live Flight Tracker showing the skies around Mitiga empty of aircraft now and some previous arrivals/departures diverted.

Mitiga and Tripoli will be liberated from the crumbling GNA western puppet soon. Depends how many head-choppers the CIA sent in there the last week or so. FUKUS intel agencies and Muslim Brotherhood have Mistata stuffed with imported head-chopper militias for the big battle to preserve the GNA.

Yes you are right – I meant that Mitiga AB (I knew it as Wheelus AB !!) was still operational for combat air sorties, but closed to civil traffic. Tripoli International has of course been closed since 2014, just abandoned/junked AC sitting there.
Let’s hope we don’t get a repeat of Op “Odyssey Dawn”or “Harmattan “or whatever before LNA breaks thru the Second Ring Road

Hope is always nice, but I’m from the US, abuqahwa. Consider the usual behavior of my psychopathic leaders and the US deep state…

The US is here. Hope for the best, but expect plenty of abject EVIL. We’re good at that part… REALLY good.

Remember back in 2014 when US ‘Intelligence officials’ were sure those dozen or so abandoned/junk aircraft at Tripoli Intl. were going to be used by Ansar al Sahria for terror attacks? I guess IS must have ran out of airplane-fixer guys. 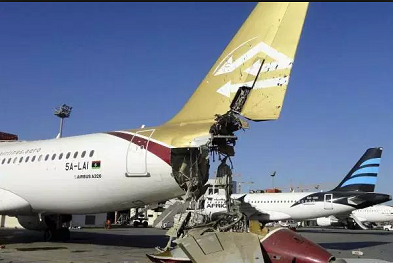 Wheelus AB? Wow… I had to look that one up!

The french had destroyed not more than 10 vehicles, some of them APCs and SPG.

That’s far from being a brigade’s worth of equipment.

You are probably right, did not have access to accurate BDAs at the time, just extracted from INTSUM dated 23MAR2011 ::

3. The brigade was now task deployed in three – a main assault

battlegroup, including the Palmaria 155 mm SPGs, preparing to move into

BENGHAZI, a holding/reserve group going firm in AJDABIYA and keeping the

MSR junction clear from insurgents still in the area, and a company-size

the insurgent defences or cut the coast road, and it is unclear whether

4. As the main battlegroup was taken under FRUKUS air attack and support

artillery pieces destroyed, the brigade was ordered to disengage from

BENGHAZI and withdraw south. Despite a full moon, a cross-country

dispersed move was impossible (no driver NVDs or Navaids!) forcing the

then destroyed at least half of the brigades effectives, including most of

the remaining Palmarias and armour. Exactly what proportion and numbers

I wonder what the green arrows are around Swani, some local counter attack?

Yes supposedly by Misrata controlled Brigade 301 and 17 Security Unit but I don’t know the details. In any case the LNA cannot bypass the three main lines of approach northwards but must at least secure/block the Gharian road at the Suani ben Adem junction

Ghadaffi to UN: Hey… are you UN muppets blind or just stupid? Can’t you see what those evil fuckers are planning? Do you think they want to turn Libya into a paradise for Western democracy? Do you really think they care about the ‘freedom’ of the Libyan people? FFS, Wake the fuck up – YOU’RE NEXT!
UN: [uncomfortable snickering…] 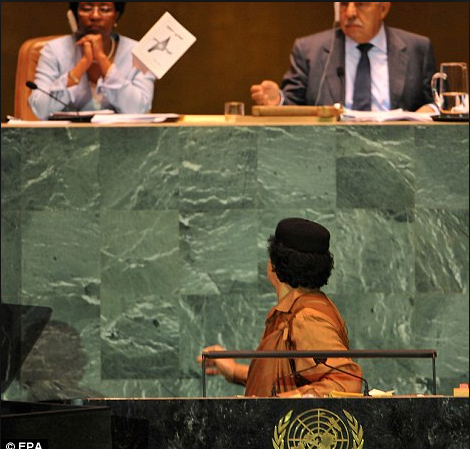 All it would take to repel this communist haftar offensive is a single US Carrier Strike Group with LOTS of Tomahawk missiles and F-18 Super Hornets :)

yeah except that wont be happening…
keep dreaming Rocket Nose

Yes, but the US can’t afford to deploy a carrier strike group.
Maybe if you begged China they might increase your credit limit?

Lol the US can definitely afford that. They have 11 supercarriers and can deploy them anywhere across the world – in other words they can wage war against 11 different countries simultaneously using 11 carrier strike groups. NO other nation can do that :)

There arent enough sailors and aircrews for all that.

You could.empty all the gay bars in the nation and it wont be enough.

Cheerleader goona cheer!
You should have stuck to basketball tonight boyyyy.

I’d school you in any sport. Basketball, wrestling, weightlifting, you name it

As if am scared by some internet dork!
If were here…thats what we are.

What I am good at is finding a little detail.and shove it your face.

Like the fact that YOU are acting like a little cheerleader bitch for the military industrial complex, while you yourself , is too coward to serve yourself.

You come here to stir up shit, like the good little bitch you are, because its you job! Its ok to have a dude cheerleaders , im ok with that, just embrace it.

Your too much of a coward to do that anyways.

hopefully the LNA do to the GNA what they did to Gadaffi when they humiliated and paraded him in the streets… those barbaric jihadi muslim brotherhood savages have no place on this Earth. Hope LNA has no mercy with them, kick them all out and destroy them