The most intense clashes took place in Zilaqiat and Zilen where Salah Eddine Al-Checheni, a high-ranked member of al-Qaeda-affiliated Jaish al-Muhajireen wal-Ansar, was killed. Jaysh al-Izza captured six SAA fighters and an artillery piece before the retreat. 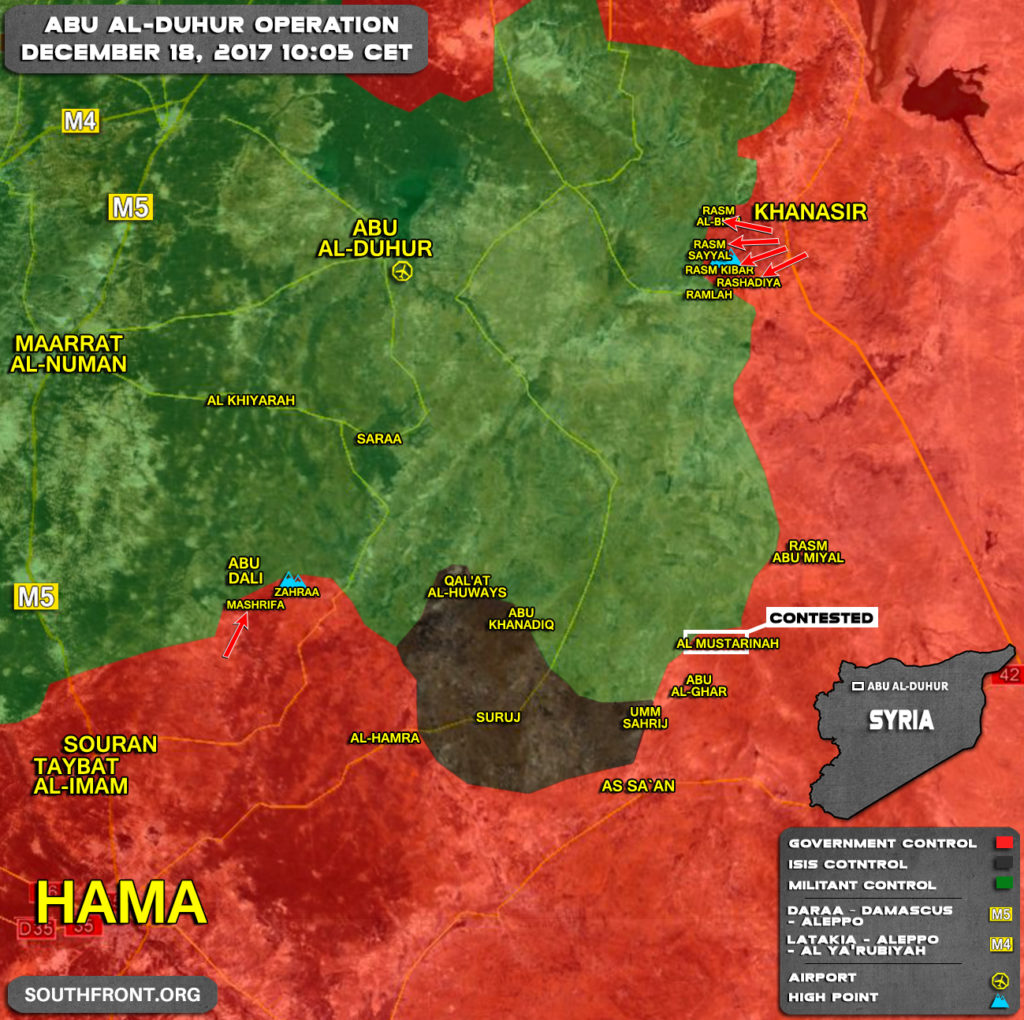 I celebrate every inch of Idlib liberated. So there is a lot of party ahead! Whooohoo!!

Well done sunnis. Look what you did to Syria. Worst part is that they absolutely don’t care about.

Majority of SAA are sunnis. But yeah the rebellion was led by sunnis. If only bashar listened to rightful demands of his people instead of opressing and murdering them….

1 – 100% of the rebels are sunnis. 2 – What rebellion ? They are trained terrorists like we see it during 5 years. 3 – What oppression or murdering ??? The same as Gadafi did ??? XD Sunnis want nothing at all. They are their own problems. In every country, it’s the same with them. They are always oppressed everywhere. When you give them democracy, they start killing each others.

Rebels are bad, but bashar is a murderer and you can’t deny it. The revolution started out peacefully and it stayed so for a while, Bashar should have taken the easy way and negotiated with the opposition instead of the atrocities he did to the protesters. BASHAR IS THE #1 RESPONSIBLE FOR WHAT IS HAPPENING IN SYRIA, followed by global powers and the Sunni/shia hostilities promoted by gulf states and saudi Arabian propoganda

Bullshit. There was no revolution even less “peacefull” revolution. Just a bunch of terrorists who started attacking governement institutions to start the war.

Where is the “opposition” and what they want ? You obviously see that there is no opposition and that they want NOTHING. Even SDF say they wannt “democracy” but expell their oponents.

You’re very misinformed, Google some info how protests around syria started, why it started, and what happened to protesters who ended up in Bashars jail The people wanted to end dictatorship and corruption but the extremists were the ones who got the weapons and money from uncle Sam and so qaeda and it’s sisters were born while the real opposition who actually cared about the country became so irrelevant nowadays.

That’s so bullshit. So, the so-called opposition is crying about dictatorship and can’t handle their terrorist buddis ??? XD. If there is no democacrcy in Syria it’s for a good reason. If those so-called “opposition” can’t handle sunnis terrorists, how can it be a democaracy in Syria ???

There was absolutely no revolution whatsoever. The only revolution was the jihadist revolution held by USA to topple Assad.

You sound like Assad in the beginning of the revolution. He said the same.

There was no revolution.

Revolutions are in Yemen and Palestine. Why Syrians people are running into Assad areas ???

Funny, they do not. Five to six million abroad, one million to Idlib and Azaz, 1.5 million to SDF held areas.

Only Assad areas having many refugees are coastal area and Damascus.

That guy
Reply to  §âm

§âm
Reply to  That guy

In real democracies people are intitled to express their political views without fear of prosecution, jail, and torture.

https://www.npr.org/sections/thetwo-way/2017/02/06/513804240/amnesty-international-reports-organized-murder-of-detainees-in-syrian-prison I don’t know if you consider amnesty international a reliable source or controlled by the magical mind-reading boogey man, but take a look at what babyface Assad does to his people

Who can object to anyone who is responsable for so many deaths when he does all that in name of personal power, ambition and money?

So why are people in so called democratic countries not allowed to speak out against israhells genocidal campaigne in occupied PALESTINE..And what about the HOLOHOAX?,why are history researchers and revisionists put in jail for questioning the many lies and scientifically proven facts that it was a HOAX?They are also called anti semites,by people who are fake ashkeNAZI jews from eastern europe,who are NOT semites..The earth has has enough blood spilt on its soil because of zionist manufactured wars for PROFIT..Whats the weather like in hell aviv?.

All arabic people need dictators,if no and coming juesej democracy,moslims will do what they do in EU,now.They need hard hand!

They’re used to being opressed, that’s how their fathers and grandfathers lived, opressed and afraid to think

Style and maners of life in arabic country are tradicional with all – and + .Juesej democracy is only cover for mutiny opposite unwanted leaders and supremacy about region,who dont like USA.When I am visit Tripoli airport,on the wall was sign Dead of america!

That guy
Reply to  §âm

No again you are incorrect. A democracy only entitles people to elect those who will represent them. The charters and constitutions of nation’s are what protect individual rights and freedoms.

Did you visit Syria?I am was there with our tractors T-72.Syria was most beautifull arabic country.Was destroy countries,who dont do bussines with USA..Irak,Syria,Libya.This is true!

Obviously this one is a Hasbara/JIDF bullshit commentator…. Assad is NOT the murderer, when the reality is the “rebels” are murdering civilians and have been aided/funded/and armed by the psychotic Jewish pricks in Israel and of course the US itself.

Like it or not there is no “good” side fighting on the ground, syria is ruined and it’s economy is dead i honstly think the regime is “good’er” than the extremists but still….i know what Alasad done to his people …he and his people should go…syrians need someone who cares about their folk and lead them into the post war era and revive it. With Assad nothing will change post-war.

Again, hasbara agent.. you are in here deceiving… The economy is not “dead” and has been revived with Assad running the show.. And these “extremists” have long been proven to be YOUR Jewish agents and agent provocateurs… These Israeli-US agents have been murdering the people, and not Assad…

Go back to your controllers..You have been exposed…

Haha wtf you talking about?? How dare you defend Assad?! Assad and his people are corrupt to the core. No economic revival will take place under his rule. I share your anti-US and Israel sentiment but I’m also not blind to the bigger picture, and i don’t accuse someone of being an illuminate agent or whatever if he say somthing that doesn’t fit in my made up “truth” bubble Southfront is a good news source but i don’t recommend getting your info from this one source only, u have expand and research as well if you want to get what i am talking about. Because just like your “boggeyman” controls western media there are other powers influenceing “your” sources as well. Open your mind, think for yourself,dont be fed with info like sheep.

Syria’s economy is not dead?

You are right. In many aspects the Northern Syrian economy is reviving in overdrive. Industry in Afrin is florishing. Industry is Raqqah rapidly being restarted. And more.

Dude where have you been for the last 7 years, it’s common sense now. Syria is and was lead by a corrupt murderous dictator. For 18 years and Assads father before him ( who was even more stronger and oppressive)

Earlier you admitted that bashar is a dictator, now you say he’s not a murderer. 100 000s people dead and alot more missing or as political prisoners are a cia lie apparently, bravo. Anyway it would have been more fruitfull to argue with a wall than the gentilemen on this comment section and i learned my lesson not to question what i am seeing here and just take info from NON-cia-niozionist-mindcontrol-fakenews-grabage-israeli sources because they’re 100% truthfull and we’rent related to propoganda of any sort (sarcasm for dummies)

“The atrocities he did to the protesters” , was really a set up by Al Qaeda , funded by the CIA , they shot protesters , not the SAA . You need to catch up on the news . Saudi Arabian Wahabbi trainned jihadists , ISIS and Al Qaeda , are financed by them and the US . They are responsible for what is happening in Syria .

Dear SF, the territory in the map looks so large, any chance of that area in context as it is rather small in reality.

Assad declared himself to be a traitor :

Lucio Cienfuegos‏ @comcen76 2 u2 uur geleden Meer Assad told reporters today that any Syrian who operates under the command of a foreign country, is a traitor

As Assad is under command of both Iran and Russia, that makes him a self declared traitor.

His Traitor comments were pretty much over the top

All this says is that as per 2011 the Assad regime will kill, overrun, or maim anyone who gets in their way making them unfit for Syria’s future The Russians would do well to head for the door and let the Assad regime areas be absorbed into one undivided Syrian made up of Federal States or provinces which is what the Russians essentially supported however Assad does not; as he tries to murder and starve his way to victory