The settlements of Um Oualad, Tafas, Saida, Um Mayazin, Taybah, Nassib and Jabib in southern Syria have accepted a reconciliation agreement with the Damascus government, according to pro-government sources.

These 8 settlements will be fully controlled by pro-government forces soon. Servicemen of the Russian Military Police will also enter the area according to some reports. MORE ABOUT 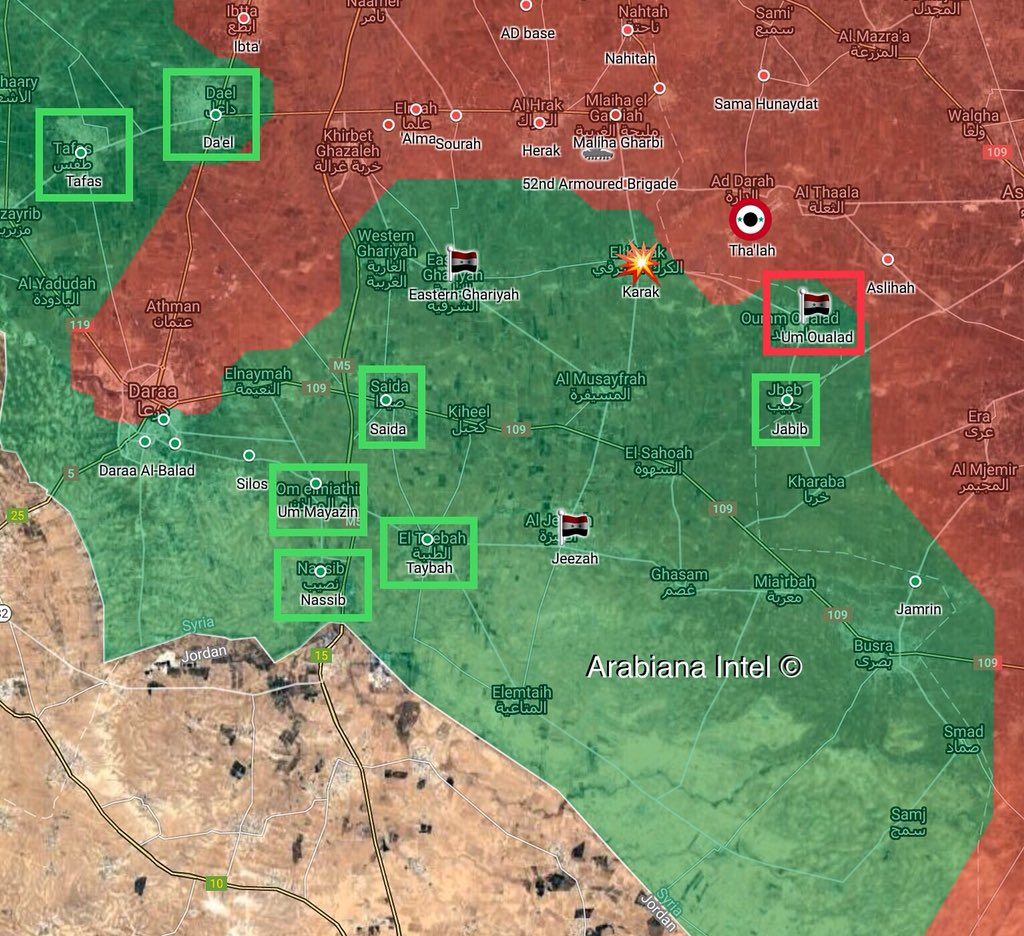 Just great ! I hope these terrorists be totally unarmed.

What the absolute blow! Interesting how the liberation of Daraa itself will be quick, when Tigers will strike from rear! :DDD

Well now Daraa al Abad is now in reconciliation and the Russian reconciliation committee was attacked in Jbayb and SyAAF has responded with heavy shelling. Apparently Nusra and Daaesh are hampering efforts of the deescalation reconciliations.

You know whats going to happen to daesh and nusra trash that attacked operatives of Russian reconciliation center but they can’t stop peace coming to Syrian land anyway. They are on borrowed time now.

Largely it is Nusra and Daesh along with foreign recruited mercenaries that commit these acts and hide behind others all are cowards.

Like i said before, all these reconcilliations sound very fishy for me. What if they are trying to sneak as many troops as possible into Syrian land like shit happened in Kirkuk with ISIS?

Nope. The SAA still lacks the manpower to fight everyone then keep forces behind to control won territory. Assad is being prudent by coming to terms with the moderate militias which have honored past cease fire agreements with Damascus while they continued to fight the Islamic extremists. In Dara’a these moderate militias probably will become local police forces to maintain order while the SAA deals with the remaining extremists.

Decentralizing power is a wise move more states should try it.

the fsa the pocket djihadiste of daraa is collapse marvellous news!!

Great news! No more support to the green terrorists and trade route with Jordan! #norestfortherats

the primary objective of operation opBasalt, the border crossing is now in SAA hands, mission completed

Breaking : International Map Makers Union is going on strike for 2 days!! Apparently they SAA is advancing too quickly in the “Heart of Syrian the Color Revolution” . SAA gave a reply: “You only get 12 hours and no more….not one minute longer”.

all seems a bit too easy, maybe an ‘incident ‘ being prepared in Daraa city or an accident over the border with Jordan or Israel, but maybe the FUKUS coalition has given up here and is more focused on the North, time will tell, by the way i’m not taking anything away from the SAA outstanding achievement

There never was any support for any revolution unless it was paid for with the foreign backed mercenary terrorists and they are even afraid to cause an uprising before SAA advanced south.

This is very great news. All US backed terrorists should leave Syria and Palestine and leave Syrians and Palestinians alone. The remaining Syrians will reconcile with Syrian government for the future of Syrian generations. With fight their is total lose and devastation but no benefit.

If they apply the same methodology in Ukraine, I expect citizens of Kharkov and Dnepropetrovsk to stand up against the government in Kiev soon.

The Americans are very harsh, on vassals who dare to stand up to the bald vulture. Did you know that Americas iconic bald eagle is actually a vulture? It’s bald because it sticks its head in the carcass of dead animals to feed.

With the Syrian army in control of Nassib, it means the terrorists supply route, highway 15 is closed to them. No more US/Israeli ammunition coming in from Jordan.

That’s it, the US at least on the southern front is defeated.

Also, this shows that the jihadists have very little, if any, local support in syria which will result in lack of reinforcements/supply/support in any upcoming battles, which also means that any support that does come thru will have to come from outside syria, most likely israel, which is bad news for everything.