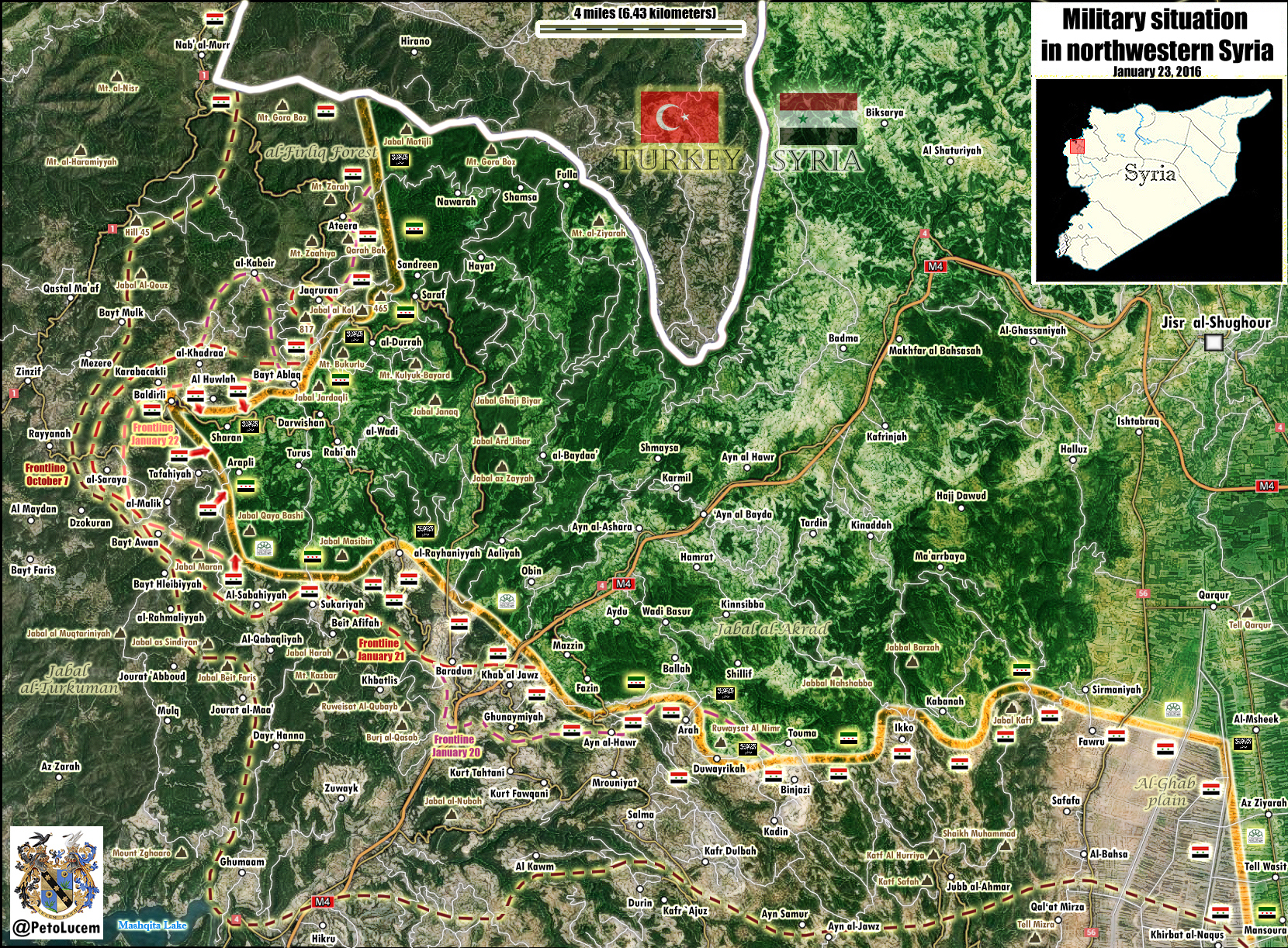 In the past few days the Syrian Arab Army (SAA) achieved significant territorial gains in the former insurgent heartland, located in the “Mountain of the Kurds” (Jabal al-Akrād) region near the Turkish border in Latakia Governorate. For the past three years, the Syrian insurgency greatly benefited from supply routes running from the Turkish border and also from the hilly and wooded terrain. This region has a vital importance for the both war parties because of its proximity to the city of Latakia and other urban centres near the Mediterranean coast. The Syrian-Turkish border area was an area denial zone for the Syrian Government forces for a long time. This has been changed.

As expected, the fall of the most important insurgent stronghold of Salma had a severe negative impact on the insurgency’s defense capabilities. On January 20, the SAA liberated the village of Ateera and the surrounding areas, which insurgents attempted to recapture a day before, without success. The government forces pushed insurgents from the al-Kabeir village and moved the pressure away from the loyalist forces deployed at the village of Bayt Ablaq. The most important advance took place in the southern operational area near the strategic M4 highway, which leads to the cities of Jisr al Shughour and Idlib.

In this area, the SAA was able to take control of the villages of Ayn al Hawr, Ghunaymiyah, and Khab al Jawz. Especially the capture of Khab al Jawz was of huge strategic importance, similar to the capture of Salma a few days earlier. By capturing Khab al Jawz and the nearby strategic crossroads, the SAA started an advance to the northern insurgent bastion of Rabi’ah. The defenders of this vital point already have had a hard time trying to hold off the government forces deployed in the northern area. Now, they also had to cover the two main roads running south to Khab al Jawz. However, the insurgents look overwhelmed by the army’s swift advance near the M4 highway. They weren’t able to divert forces to this area. Thus they can’t set a new line of defence within a reasonable timeframe to prevent the government forces’ advance towards Rabi’ah. Only one day after the SAA captured the Khab al Jawz crossroads, the army was captured the village of Baradun and the nearby dam of Baradun. In the North, the army pushed insurgent forces from the Jaqruran area, which set up additional pressure on the defenders of Rabi’ah. On January 22, the exhausted insurgent forces showed increasing signs of disorganization and fatigue. They proved unable to halt the Syrian forces which received an accurate air support of the Russian and Syrian Air forces.

During this decisive day, the SAA launched a full scale attack. All along the insurgent held bulge between the villages of Baradun and ad-Durrah. The army made significant gains and captured a string of villages including the important village of al-Rayhaniyyah, south of Rabi’ah. On January 23, the insurgent defences collapsed completely. The government forces also gained control over new areas and villages such as al-Malik, Tanahiyah and Al Huwlah.

So far, the insurgency was unable to counter the recent government’s successes in an adequate manner. It seems like they relied on some strong points near the frontline areas when the pro-government forces launched their wide scale offensive last October. As soon as these strong points – like Salma – fell, they had no possibility to halt the loyalists’ advances.

An obvious fact is they did not apply the strategy of defence in dept, proved to be fatal. This situation will likely lead to an accelerating decline of the militants’ resources and manpower. If Rabi’ah falls, it will most likely lead to a full-scale retreat towards Jisrt al Shughour. There the insurgents will likely attempt to make a final stand at the most narrow point between the Ayn al Hawr area and the Turkish border. Should this attempt fail, the way to Jisr al Shughour will stand wide open for the government forces. The insurgents’s strategic posituin will likely aggravate further due to the fact that the SAA freed up to thousands of troops recently by shortening the frontline in Latakia Governorate. In October, the frontline had a total length of approximately 35 miles. By the time the push on Jisr al Shughour will likely begin, the SAA will have to cover approximately 10 miles (in case the SAA holds their current positions in al Ghab plain). Although the army will likely deploy a small part of their total offensive force at the Turkish border, it will possess of a powerful offensive to capture Jisr al Shughour and even Idlib.

Peto, outstanding analysis, first class indeed. Your reading of the situation in Lattakia and Aleppo is remarkable, it has being proved you were right on and on. Congrats.

This is excellent! hope the SAA can keep this up and eventually take Idlib.

Thanks Peto for your analysis and South Front. Happy to see SF grow so much since it first started.

interesting analysis; excellent operational post-mortem analysis. however, your projections might not be quite so well contextualized. are you certain that the way to Jisr al Shughour is through Latakia, and that the way there and then on to Idlib is actually clear before the FSA artillery positions in the Jabal al Zawyah range that control the al Ghab plain approaches to those locations have been neutralized?

a relief map of the region illustrates, clearly, that the al Ghab plain is the most direct route to Jisr al Shughour having the least natural obstacles. nevertheless, the Loyalist forces have not, yet, attempted to advanced towards Jisr al Shughour along this axis. my analysis is that the Latakia and subsequent west-Idlib campaigns will be conducted as distinct objectives. that is, once Rabi’ah falls, the Latakia campaign will move generally to the southeast through Kinnsibba to Sirmaniyah to mop-up the province. i expect not only a distinct strategy in the Idlib campaign, but also a different operational grouping to be used to achieve its objectives; after retaking Latakia Province, the 103rd Brigade and its comrade units deserve an extended stand-down.

regarding the west-Idlib campaign, i anticipate that this will commence with a coordinated and concerted air assault against the above-mentioned FSA artillery positions in the Jabal al Zawyah range. once those have been neutralized, Loyalist forces can advance along the al Ghab plain and its connected valleys, first to Jisr al Shughour, then to Ariha, to Idlib, and, eventually, to Aleppo.

the map below shows a 15 km range about firing positions from heights just southwest of Sirmaniyah, in Loyalist-held territory, and northeast of Allej and southwest of Al Bara, in FSA held territory. plot these locations, here: https://www.freemaptools.com/radius-around-point.htm#settings, yourselves, in the terrain map mode to get an idea of the realities on the ground

The SAA did try to advance to Jisr al Shughour along the al Ghab plain. If my memory serves me right, they advanced and took territory and were beaten back couple times.

well, you are quite correct; what i meant was that they haven’t attempted to advance to Jisr al Shughour in the al Ghab plain in the context of the present northern-Latakia offensive. the primary impediment to their previous advance in the al Ghab plain was the Jabal al Zawiyah artillery positions that i mentioned.

but, to re-state, you are quite correct; “the SAA did try to advance to Jisr al Shughour along the al Ghab plain. … , they advanced and took territory and were beaten back couple times.”

for such advancment the best unit is Tiger Forces of GB Suheil Hassan, who is curentley deployed on advancing towards al bab.