This map provides a general look at the changes on the frontline in northwestern Syria since February 2019.

Wrong dummy! I don’t care what Erdogan says I care whe he does. What he is doing is brilliant and Russia is playing along perfectly

I heard the same argument when Putin went to Israel, he was a sell out etc. Than a month later Syria makes huge gains against Israeli ISIS and Al Cia Da Israel.

Actions count, in war words are just propaganda to throw off the enemy.

Erdogan is getting the racist supremacist global Jewish satanic slave empire dictatorship to ease sanctions as he gets the stupid JIhadis to kill themselves in attacks they have no chance of winning so Israel can’t used them against Turkey later.

Facts: If Erdogan goes against Russia it will give Israel the opportunity to implement the Yinon plan on Turkey, which they tried to do just over 4 years ago but Putin saved Erdogan and his families etc lives.

Erdogan will never forget or forgive that!

Erdogan and all his relatives and friends will be murdered by Mossad death squads, Turkey will be turned into one big Raqqa, bombed to bits and then broken up, with Israel getting Western Turkey along the Med, the Kurds will get central southern Turkey, Armenians Eastern Turkey, half the Turkish population will be killed and the rest will be forced to flee to Germany. Turkey as a state and people will cease to exist forever, and Erdogan would go down in history as the worst Turkish leader in history.

Erdogan is buying time until the S-400s and the pipelines from Russia are all operational, as Turkey is vulnerable to economic sanctions and air attack until then. Erdogan has to pretend to be neutral until the gas pipelines and the S-400s are all fully operational as Turkey is still vulnerable to Zio economic sanctions and attack until all these systems are finished and ready to battle against the racist supremacist global Jewish satanic slave empire dictatorship.

Oh, a prophet has come to tell the future. Already wearing your detonation belt?

I doubt they would let him into his office at Langley while dressed in field costume.

I say drive turkey into yurope.. Let the greeks deal with it.. asia for asians.. demolish the bridge and make sure they can never return. They paid for passage for a one way ticket from turkistan.

Turkey is in trouble! if not for the black sea access, they would be kicked out of NATO! Europe hates Turkey! Thus the reason why their 60 year application into the EU has been rejected! Romania got into the EU almost immediately!

Turkey is feeling very lonely right now! NATO doesnt like them and now they have to submit to Russia! Bad days for Turkey! Erdogan’s Ottoman dreams are really a nightmare! In 10 years, Turkey will have a war against its own Kurdish population, Armenia and Syria! Supported by Iran and Lebanon! Even israel wont shed a tear! In this moment i believe Turkey loses Cyprus and the European side of Turkey! Greece will take that with the support of the EU! Russia will support all of this, especially with Armenia! Turkey is doomed! 10 years and its game over! We once again must redraw the worlds map!

Serving the servants of the tyrants does no justice in the end,fk the tyrant fake god,no virgins!

If not for the stupidity of the kurds, most of these problems would not exist.. and many Syrians would still be alive. Dont blame the turks.. they are opportunists.. The kurds on the other hand are illiterate and of below average intelligence..

I have a lot of sympathy with the way the Kurds do their politics amongst themselves. They have however behaved badly in Syria. They came to Syria as refugees and have tried to take over part of the country where they are in a small minority with the help of the US gangsters. They never learn with the US, they will be thrown to the wolves yet again by them eventually.

Not sure what they expect to get done. Do the kurds think they can create a state? They have had a thousand years and failed. Their best bet was siding with the persians but even there it never worked out. The parts the kurds occupy in Syria are farm land and not civilization. ME has a lot of oil, but not much civilization and there is not much oil in Syria for the kurds to turn it into another qatar..

Glorious Kurdistan, circa cent. XXI: wedge-statelet and military base for FUKUS and ‘Israel’

It is true – partly! I tend to think that both the Kurds and the Turks are also victims, because they too were slated for destabilisation and regime change and balkanisation, AFTER they had served their purpose and become useless for the globalist project.
You see, let’s say the Kurds achieved their Rojava state, that would be a vassal state and if it tried to use its “freedom” in any way contrary to the plan they would be destroyed too. None of the players were meant to be winners, only very temporary “upper handers”. And we know who the ultimate winner was meant to be!

Very well said. Globohomo vassals like Turkey and “Rojava” are totally expendable. If Washington and London tell them to fall on their own swords, they’d better do so immediately, or else they will be the next “rogue state”.

Kurds are more culpable though IMO, because they really support the ideological aims of the Globohomo world project; or at least the significant numbers of commie Kurds do.

MORE YOU SOCIALIST/FAR REIGHT.ONCEST SPAWN/BUSH/SKULLS N BONES
NOTHING COMMY ABOUT TURDS,THEY AINT SOVIET NOR CHINESE!
This (nwo fake aka blame cccp+china real left) IS HOW THE NWO DUMB RACIST,IN THE END LIKE IT OR NOT THINGS WERE NORMAL WHEN WW2 ENDED THEIR FAR REIGHT SOCIALIST CONCEPTS AND THE WORLD EVELOPED THE MOST WITH BOTH FACTS OF EACH WING,CONVERSELY CAN THE BIRD FLY WITH BOTH WINGS ON THE RIGHT? Use your head!

Maybe when all the terrorist are gone the SAA can take a page from the Jew book ;} 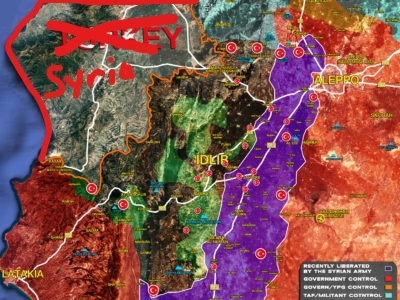