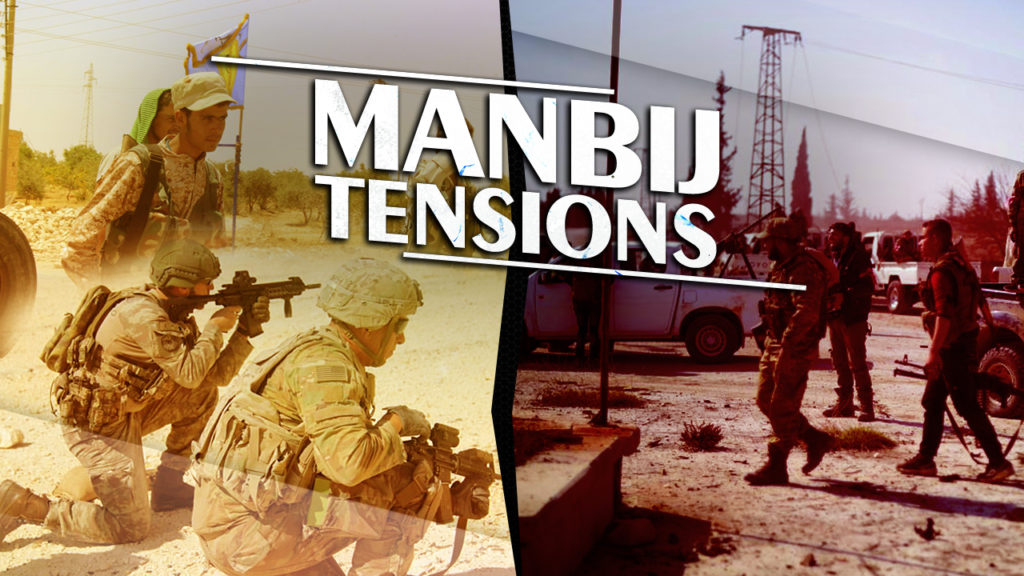 The “Manbij Civil Council” of the so-called “Autonomous Administration of North and East Syria” issued a decision to end the curfew ban imposed in the city of “Manbij” in the province of Aleppo. The curfew was imposed following events that took place in the region in the past days.

The council, controlled by the US-backed Syrian Democratic Forces (dominated by Kurdish YPG), claimed that the decision came after a calm returned to the region.  The curfew was imposed in response to protests against practices of the so-called SDF “self-management”.  The curfew, imposed last Tuesday, ended on Friday evening.

The curfew was imposed a day after massive civil protests erupted in Manbij rejection of the “forced conscription” campaign carried out by the SDF’s “Manbij Military Council” and the arrest of dozens of young men, in order to force them to fight in the ranks of the SDF.

In response, the SDF imposed a total curfew inside Manbij, in an attempt to prevent the demonstrations, but it failed to do so and the protests continued until the SDF announced a decision to suspend the forced conscription campaign for the current period.

According to reports, 7 civilians were killed during the protests, at the hands of gunmen of the Manbij Military Council. Dozens of other civilians were injured, while the popular pressure succeeded in forcing the “Autonomous Administration” to reverse its decision, stop forced recruitment, and release the civilians it had arrested.

Here is the ‘democracy’ America brings wherever it goes.

You certainly has a curtain for Your face. Is it a niqab or hijab withtotally dark sunglasses.

If you could speak anything but gibberish I could make sense of what you said.

Did they not vote these Jews into power?

Those who vote for war criminals are accomplices.

This country’s ‘shared values’ has led to millions of innocent deaths.

America is not democracy but dictatorship

Instead of blaming on KURDS, left alone against ISIL thugs and their masters, the GENOCIDALS BEASTS OCCUPYING ANATOLIA, WHY DO SYRIANS AND THEIR SUPPOSED ALLY, THE RUSSIANS, DO NOT RUSH BEASTS AND THEIR PUPPETS OUTSIDE SYRIA TOGETHER WITH YPG? RUSSIANS CONDUCT PATROLS WITH GENOCIDALS WHILE THEIR SYRIANS ALLY EXCHANGE CANNON SHOTS WITH THEM…. RUSSIANS ARE DOUBTFUL AND INTERESTED ALLIES… AND SYRIANS? DO THEY LIKE FOREIGNERS – AND THE WORST OF ALL, NOT HUMAN-BEINGS- IN THEIR COUNTRY?

Shouting gets you no where

There should never be any peace in that area as long as those SDF quislings do the dirty work for the Americans,in fact there should be resistance every day.

Do You even belive in that Yourself. Do they speak Norweigian too:)

Norwegian* Go on and speak “Norweigian” so we don’t understand the fuk you say. Thx

They’re the Kurdish version of Bibi’s terrorist forefather Zionists, who established Israel by killing lots and lots of people, as colonialist forefathers seem to tend to do.

I wonder seeing as how the US is forever going on about bringing democracy and freedom if the people would be allowed to vote and if they did freely vote to rejoin Assad’s Syria would they be allowed too. No , I guess not as that would blow the lie of the reason the US invited itself into Syria. By forcing the people to fight for them only increases anti feelings and desertions or even having the forced fighters to turn their weapons on the SDF . Wasn’t Manbij where the SDF / SAA / ISIS and Turkish backed forces sort of met years ago before ISIS got squeezed out. So it would be a mix of Kurds and Syrians rather than a Kurdish area .

ISIS wasnt squezed out. They were taken out bite by bite by SDF/YPG and USA.

It also never has been any USA plan to bringh democrasy and freedpom in Youir scirence fiction versions at all. NEVER.

And if it wasnt for SDF/YPG/MMC and USA Yours wasnt even near Manbij today. It was Turkish just as Afrin and Azas.

Assads has had no votings in Syria for decades. You not even seemes to know what it is.

You understand nothing about Manbij as well. You as usual is in total deniel ogf what is very good by Kurds and SDFs compared with the crapYou lie about all them time.

Those arabs in the Manbij district dont support Assads . GET IT.

Kurds there CAME BACK to the district. Before the war they were majority in most of the farming but almost none in the big Manbij town.

I will remind You once again Kurds are Syrians too and Your kind certainly dont speak for any majority of the Syrians at all. If they were about 7 million Syrian would have come back long time ago armed to teath to support You. The same goes for the arabs in Manbij, but they dont want people like You back. They dont want ISIS, They dont want FSA. They dont wantbloodyTurks.

Compared to all of you they choose SDF even there are big problems because of the Assad and Turk boycut.

A Counsil is not Kurds taken over. You only see the military part, which for good reasons protect the Manbij Counsil.

You are without any intelligence whatsoever. Count your downvotes and see that no one wants you . How many upvotes do you get . None ? that means no one believes a word you say. Get the message .

How much do you get paid to write your bull droppings that no one cares about other than you. . D U M B fool.

Who would pay Jens anything? It would be money down the drain.

Getting censored all the time

he is either getting paid or totally devoid of intelligence

He gets paid to troll here, no doubt. His tasking is to dumb down the discourse, make it less useful. There are times when he goes off script and his English becomes nearly perfect, this usually happens when he gets mad. The rest of the time he sticks to his assignment. The USA has put in place some $300 million to pay these influence peddlers and disruptors. They’re beginning to show up all over anti-imperial webpage comment boards.

ISIS wasnt squezed out. They were taken out bite by bite by SDF/YPG and USA

The SAA with Russian support were fighting ISIS south of the line that exists today while the SDF fought them north of the borderline of today. Go and look at the maps of the day to day fighting of that time or do you just have a selected memory or more likely no knowledge at all..

I hope that these areas can be handed over to the real Syrian government. The SDF is in a position of weakness. It’s time for the SDF project to end once and for all.

I remember that Manbij was allegedly “liberated” from ISIS by the Kurdizios. In other words handed over from one Amerikastani proxy to another.

I don’t understand why people care about Kurds? in many ways they are worse than Zion and Turk-isis. They are becoming like Zion in front of our eyes…if no one stops them now don’t fuking cry about it in the future. They will stop any peace deal and work for Zion yankees – they are killing Arabs Syrian. They use Syrian oil/gas to buy weapons to fight Syrians. Why people care or take the Kurds’ side? because they fight Turk-isis? so we should ignore everything else they fuking do?

I smell civilian rising up with arms in hand 🦶