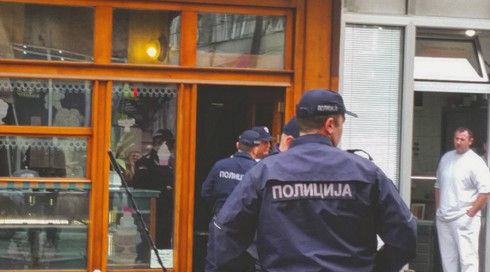 Unknown man died today at 12.30 in the Ilija Garašanin street, after he detonated explosive device in bakery, Serbia’s Ministry of internal affairs reports.

As local media reports, Ilija Garašanin street is closed for traffic and there is a large number of police officers carrying out investigation. Chief of the Belgrade police and members of forensic team are present on the crime scene.

A man of about 50 years of age entered the bakery in 12.30, showed the bomb to the workers and told them: “I’ll activate the bomb, get out!” After that he activated the bomb and laid down on it before detonation.

The Petković bakery is owned by Bratislav Petković, a former culture minister and president of the Community Museum of Science and Technology.  Although a high school is located on the same street as the bakery, the students were not under threat.

A bank, a butcher, fast food outlets, pharmacies, a market, as well as another bakery are also located in the nearby vicinity.

Footage from the scene: