Part of the Malaysia Airlines Flight MH17 at the crash site in the village of Grabovo in eastern Ukraine, seen in a file photo taken on Sep 9, 2014. (AFP/Alexander KHUDOTEPLY)

There is no conclusive evidence that Russia is to blame for the 2014 downing of Malaysian flight MH17 in eastern Ukraine in July 2014, Malaysian Transport Minister Anthony Loke said on May 31, according to Channel News Asia.

Loke made these remarks commenting on the recent allegations by the so-called Joint Investigation Team (JIT) that a missile and a missile launcher used to shoot down MH17 had come from the Rusian military.

“There is no conclusive evidence to point at Russia under the JIT evidence,” Loke  said. “But who’s responsible – you can’t just pinpoint at Russia.”

According to the transport minister, any further actions of Malaysia would be based “on conclusive evidence”.

The JIT published an interim report on the MH17 crash on May 24, 2018. The report claimed that the BUK missile had been from Russia’s 53rd Antiaircraft Brigade deployed near the southwestern city of Kursk.

Russia strongly denied any charges brought on by JIT. The Russian Defense Ministry said not a single antiaircraft complex had ever crossed the Russian-Ukrainian border.

Yet another Western “cunning plan” that fails on account of “insignificant” details. Like the fact that certain governments actually want to find the truth behind the incident and not just use it to frame Russia. Back to the drawing board – Baldrick…

Acussers are NATO countries or ennemies of Russia..

The first OSCE monitor who arrived at the crash site took photos of the cock-pit section of the downed airliner that had clearly been riddled with explosive machine-gun fire,consistent with the armoury of the 30mm double-barreled cannon of an SU-25 fighter,two of which were spotted by Russian radar following the doomed MH-17 just minutes prior to its sudden destruction.The subsequent attempt by the NATO bloc to frame the Russian-backed rebels for the atrocity has been a campaign of bare-faced false-accusation ,lies,propaganda and fear-mongering that has almost led the world to the point of a state of a new Cold War,Not since the time when Andropov’s early warning system mistakenly identified a high-flying flock of wild geese flying from Europe towards Russia has the world been brought so close to a full-scale showdown between NATO and Russia as when the leaders of the UK,Canada ,France,Holland and the United States all jumped on the bandwagon to blame Russia for the downing of MH-i7 on the 17 July,2014,exactly 96 years to the day that the Romanov family were murdered in cold blood by the Bolsheviks who had been armed up and funded by the very same cabal of western corporate and finance power that has for over a century sought to use whatever means it believes necessary to achieve a global ”New World Order”,even if that meant two world wars and the immediate possibility of a third,final and devastating global war ,as envisioned by head of the American Association of Scottish Freemasonry, General Albert Pike in 1871 as explained in his letter to Guiseppe Mazzini that then mysteriously disappeared from the British museum in 1977.
Photos of the wreckage of the MH-17 that show the machine-gun bullet-hole riddled cockpit section were posted by the OSCE monitor to the Global Research website in the immediate aftermath of the tragedy.

AM Hants
Reply to  Tom

Thanks for the reminder of the first OSCE representative. Remember, watching him being interviewed and stating those facts.

MH17: Pockmarks look like from very, very heavy machine gun fire, says first OSCE monitor on-scene… Bociurkiw is a Ukrainian-Canadian monitor with OSCE who, along with another colleague, were the first international monitors to reach the wreckage after flight MH17 was brought down over eastern Ukraine.

In the CBC interview, the reporter in the video preceded it with: “The wreckage was still smouldering when a small team from the OSCE got there. No other officials arrived for days”.

“There have been two or three pieces of fuselage that have been really pockmarked with what almost looks like machinegun fire; very, very strong machinegun fire,” Bociurkiw said in the interview.

Parry had said that Bociurkiw’s testimony is “as close to virgin, untouched evidence and testimony as we’ll ever get. Unlike a black-box interpretation-analysis long afterward by the Russian, British or Ukrainian governments, each of which has a horse in this race, this testimony from Bociurkiw is raw, independent and comes from one of the two earliest witnesses to the physical evidence.

“That’s powerfully authoritative testimony. Bociurkiw arrived there fast because he negotiated with the locals for the rest of the OSCE team, who were organising to come later,” Parry had said…https://www.nst.com.my/news/2015/09/mh17-pockmarks-look-very-very-heavy-machine-gun-fire-says-first-osce-monitor-scene 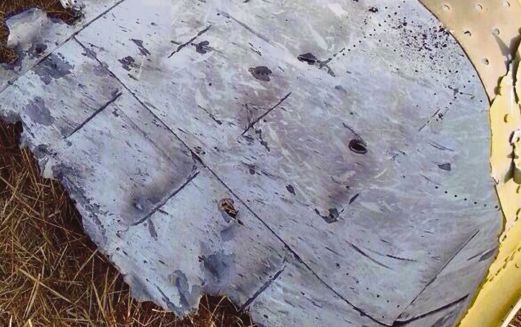 Most of the point you make ,are true TOM !ML17 ,holes came from the AIR to AIR missile,was supposed to produce these holes ,in the first compartment ,upon hitting the target /by explosion .. I missed the dates of the date of the Romanov murders .Albert Pike hides nothing ,he has written three books ,how to go about the FREEMASON ,N.W.O. agenda ,witch is enrolling right now ,in EUROPE /EU .’THE ZIONIST UBER RACE’ /will take over the universe ,after the destruction of the Christian White race ,fighting the Islamic races ,to extinction ,both will vanish !The Zionist ,Jewish master race ,will control all the GOYIM ,20.000 slaves to each Jew !OK,it seems it’s all coming true ,right ?So,can you calculate ,how long yet ???I am not an expert in CABALA numerology ,it seems ,they do nothing ,without these numbers !!I have a surprise for them ,the CHINESE ,have a totally different way ,of calculation ,and they are saying otherwise !!

The whole affair was an assassination attempt on Putin that went wrong.

Putin happened to be aboard a plane not far away from the ill-fated Malaysia airliner.

TRUE !!!I cannot understand THE DUTCH ,involvement in ML17 cover up !Most say ML17 had rotting ,cadavers in it !So where are the passenger from ML17 ,also some researchers ,are sure ML17 ,is ML370 !ML370 ,is proven to have landed ,by R/control ,safely in DIEGO GARCIA !!LOOK IT UP ,on ABEL DANGER.NET .

Yes, every Boeing airliner has backdoor software/program where the planes can be intercepted by satellite, with the entire controls of the plane intercepted, blacked-out and flown from the ground using sophisticated flight systems. Same systems that were used on 9-11. With MH 370, there were a lot of Chinese scientists who work on the cutting edge of nano-technology, who had a big conference before they boarded the ill fated plane. It was a deliberate attack on China. Plus to hurt Malaysian – Chinese relations was a good thing too. Where the plane ended up? I don’t know, either was directly flown into the south Indian Ocean, wher it ran out of fuel, or in fact it was landed in Diego Garcia. But the Chinese satellites would have picked it up there.

That’s why no world leader on board a Boeing/Airbus is safe. That’s also why China and Russia are building their own civil aviation industry and fleets.